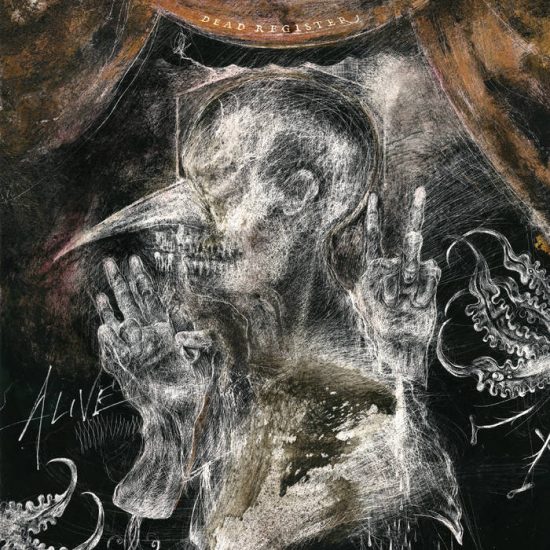 (In this post Wil Cifer reviews the sophomore album by Dead Register, which is set for release on May 13th by Seeing Red Records.)

This Atlanta trio has graced a few of my end of the year best of lists. They are known for flirting with various shades of heavy, sludge and doom being the two sub-genres that come closest to describing the darkness thickly emoted from the sonic swathes they summon, using only bass, synths, and drums as the primary instrumentation. Their new album finds the band continuing deeper into the despairing abyss their previous work has gazed into. This time around the grooves are just more refined.

The title track that opens the album carries a sleek industrial stomp. The drumming gives the vocals plenty of room to lament. At times the tension has a shadowy post-punk feel, but with more oppression to its heavy-handed melancholy. 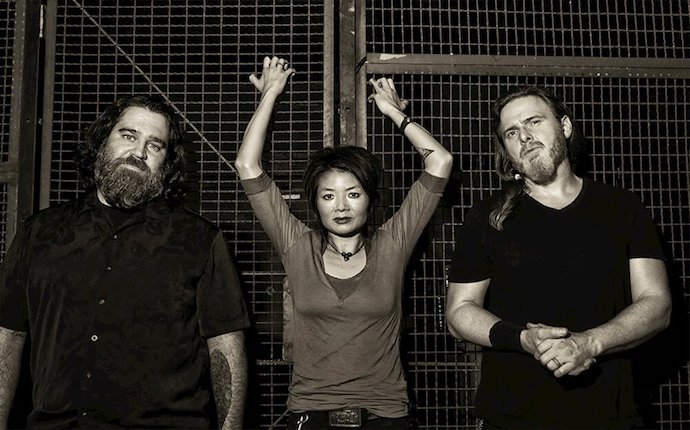 The slithering minor scales on “Circle of Lies” provide a romantic contrast to the song’s more pounding sections. Overall this is a heavier grooving album from what they have done in the past. The atmosphere that drips from the corners of their sound is weaponized negative space, crushed when the riffs contract. This is demonstrated on “In Between” which is one of the album’s more driven songs thanks to the frantic drumming.

I would not say they are a band that aspires to be beloved by the masses, as they refuse to dumb anything down to the lowest common denominator, but you can hear how “Jaded Love” might be the closest they have come yet to something radio friendly. It works off of a more straightforward chug. This band can bever be accused of just being heavy for the sake of being heavy. Instead it is a sonic intensity that is a by-product of this band writing great songs no matter what genre you want to pin to them. Heaviness is used as a color rather than the sole purpose of creation.

Regular readers here will not be surprised that this band has some almost goth leanings, given my taste in music. Here the “goth” qualities are not a Type O Negative like languishing over headstones, but instead come from how the ambience adorns the melodies of songs like “Two Silhouettes”. Chvasta‘s baritone croon might add to coloring their sound in a gray bleakness. It also serves to give the album’s narrative a unified voice during the stylistic shifts. “Longest Day” floats somewhere in a middle ground between the crossroads of sounds the band dips into.

On the last song the band dig deeper into the rock-tinged side of what they do. It is moodier, which is a more vulnerable side of heaviness. This causes the sound to become more doom-flavored in its intentions; rather than mourning or loss, it is more of a burden of the stark feeling one gets from just being alive in today’s world — a feeling for which this album provides a much-needed soundtrack. The message might not be to abandon all hope, but it does provide the sonic colors to lean into dystopia with.

If you are a fan of this band’s previous work, you will enjoy this album as much or more, as they have continued to perfect what works for them. If this is your entry point I think you will be just as impressed. Either way, not only give this one a listen but let it wash over you. After all, the end of the world needs the best soundtrack possible.