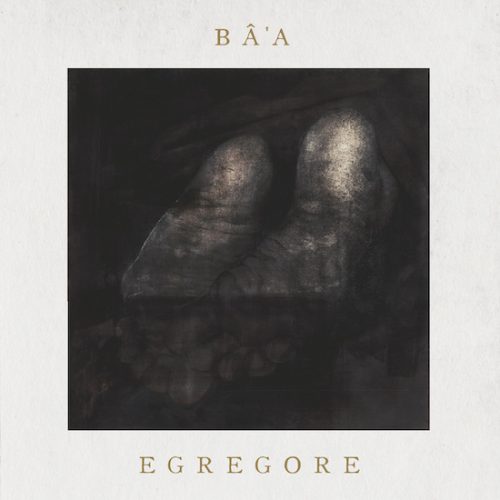 We are, or so it appears, in the middle of yet another Black Metal boom period.

Last week alone saw the release of new albums from (amongst others) Black Fucking Cancer, Dark Funeral, and Slægt, this week we’ve got new stuff from Falls of Rauros, Kanonenfieber, and Kvaen (which I’ve already written about here) and just within the next month we’ve also got new albums from Vimur, Vanum, Feral Light, Suntold and more all on the way.

Of course, with such a blackened bonanza of killer concoctions coming out it would be easy for some of the less well-known, less (in)famous, artists to be overlooked, which is why today I’ve chosen to turn my attention towards Egrégore, the upcoming second album (set for release this Friday) from French firebrands Bâ’a.

The most discerning among you may already recognise that name – either because you’ve stumbled across them at some point before now in your own travels, or because you remember the last time I wrote about the band (calling them “ones to watch”) back in 2020 – but for those of you coming at this release with fresh ears allow me to provide a short introduction.

Made up of a trio of musicians already highly-active in the French underground scene, Bâ’a are undeniably, unequivocally, a Black Metal band, right down to their cold, dead core.

However, as hinted at one their debut, Deus qui non mentitur, and as further demonstrated by the six scintillating compositions which make up Egrégore, they’re not particularly beholden to any one particular “school” or “wave”, but rather approach Black Metal more as a means to an end… a means of expression… where all the borders and rules are far more porous and malleable than is commonly believed.

This is quickly made apparent during opener “In Umbra et Luce”, which marries sinister, slow-burn atmosphere and eerie, esoteric melody to an array of ferocious, fire-breathing riffs and undulating, unconventional rhythms – penetrated and pummelled here and there by eruptions of blistering blastbeats – to create something equal parts harrowing, haunting, and hypnotic, whose ever-shifting dynamic and odd progressive proclivities make it difficult to fit neatly into a well-defined box.

Now, don’t get me wrong, despite what I’ve just said Egrégore is most definitely a Black Metal album, there’s no denying that, but it’s just as definitely not interested in simply repeating the same old rote patterns and retreading the same well-worn ground as its peers and predecessors.

Even the relatively simplistic (on the surface, at least) strains of “Domitor”, for example, actively work to bend (without actually breaking) the paradigm, blending both melody and dissonance in a way which seems as though it should be a contradiction in terms, while also incorporating some unusual synth-based textures which add a whole new – and wholly unexpected – layer to the music.

Of course, there’s nothing preventing you from enjoying and experiencing the album as just a Black Metal record – the near-relentless cascade of rippling blast-beats and galloping kick-drums which propels “Bellum”, for example, is practically guaranteed to put a grim grin on anyone’s face – but it really is the subtleties and nuances which make this album a true delight to behold.

This is particularly obvious during the venomous, visceral, and thrillingly varied, vocal delivery of frontman Rms Hreidmarr, whose harried, larynx-tearing delivery eschews the usual cadaverous croak or grisly growl that the genre is more commonly associated with in favour of a much more raw and all-too-human howl of anguished emotion, interspersed here and there by moments of brooding, portentous spoken-word and sombre, semi-crooned cleans as the situation dictates.

But the music too demonstrates an unusual willingness to shift shape as needed – take, for example, the sudden-yet-smooth transformation which occurs part way through “Urbi et orbi Clamant” (currently the only track available for streaming, though by the time you read this that may well have changed) – meaning that this is one album that’s able to cover a lot of sonic ground, and conjure up some surprisingly complex emotions, over the course of just over forty-two minutes.

So if you’re after something from the less “notorious” side of the Black Metal scene, something which doesn’t neatly align itself with any one particular style or sub-genre – it’s atmospheric in places, yes, but it’s not “Atmospheric”, it’s often melodic, but not “Melodic”, it has moments of dissonance but… you get my drift I’m sure – but which rather pulls influence and derives inspiration from across the spectrum, then give this a listen. Because this album has most definitely taken them from “ones to watch” to “ones to beat”.