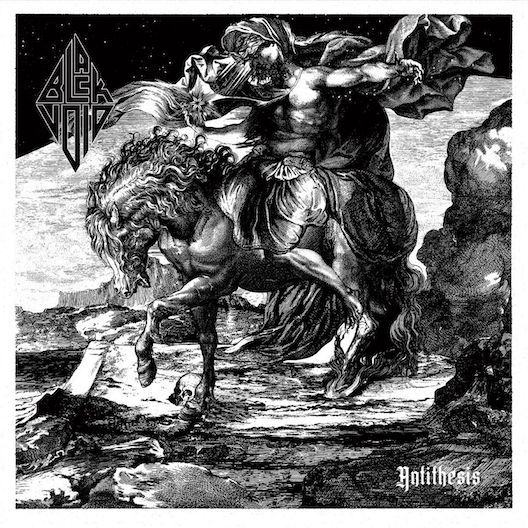 I decided to begin with music from forthcoming releases by a big label before clawing deeper under ground. The first pick is a video for “Dadaist Disgust“, a new single from this Norwegian band’s upcoming debut album Antithesis, out May 27th on Nuclear Blast. 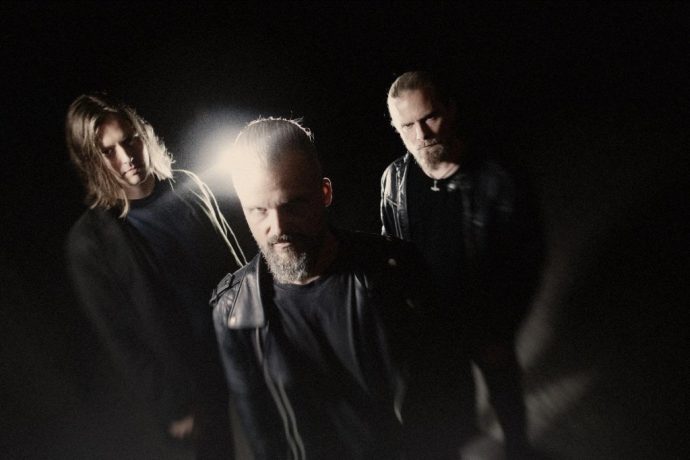 Black Void are led by Lars Nedland of Solefald and Borknagar, which would be reason enough to listen to the song, but there’s a further reason: Sakis Tolis (Rotting Christ) adds guest vocals, which give the music a vicious edge..

Now we’ll move into another track off the new SepticFlesh album — a piece of sinister symphonic metal grandiosity, with Arabian musical accepts that match up with the song’s title. I’m not alleging that the song is unconventional, but I still enjoyed it, and maybe you will too.

“The Desert Throne” is from the band’s upcoming album Modern Primitive, out via Nuclear Blast Records on May 20th.

I thought “Behind the Leviathan” would flow well from that SepticFlesh track. It too is a menacing and grandiose thing, with spine-tingling barbarity in the vocal department, enough jolting grooves to cause crippling trauma, and bits of darting and swirling electronica to keep you on your toes.

The song (which comes with an enthralling video by Costin Chioreanu) is off the band’s debut album Empyrean, due out on June 3rd.

I’ve had a real weakness for the musical hybridization of this band (which was founded as the solo project of Helltrain frontman Pierre Törnkvist) ever since discovering their first single in 2017, and with this next song they’ve hooked me again. “Deadly Screams” is an offering of classic head-hooking heavy metal gold charred by black metal vocals but shined up to a brilliant gleam by the guest lead-guitar performance of Olof Wikstrand (Enforcer). If you’re not already following this band you damned well should.

Clayshaper is a faceless one-man project who does some very cool things with visual art (see his Facebook page linked below), and has also created a big collection of songs. The one provided through a video below (which incorporates clips from the legendary film Nosferatu) is the first piece of Clayshaper‘s music I’ve encountered, and it struck a chord.

The riffing and the ringing leads are fire-bright and sorcerous, the battering drumwork is compulsive, and the vocals are barbarically ravaging. Keyboard accents also give the music a haunting gothic atmosphere in keeping with its vampiric theme.

“Vampiric” is the title track to Clayshaper‘s new album, which drops on May 27th.

Now we’re moving into nastier territories, beginning with “Exodo Mortuoso“, a new single from Holocausto Canibal‘s forthcoming sixth album Crueza Ferina, which will be out on May 27th through via Selfmadegod. It features a guest guitar solo by Bob Vigna (Immolation).

And yes it’s a nasty piece of work — a brutal dose of d-beat death metal that races and clobbers, gurgles and gouges, and ultimately sears with its heat. (Credit to Decibel for the premiere two days ago.)

Next up we have “Apostel“, which will get your head moving, roil your guts, gnaw on your throat, and put the fear of the devil in your head. A new piece of sinister savagery from Khold, it’s taken from the upcoming album Svartsyn, out June 24th via Soulseller Records.

The next song is also nasty, especially in the vocal department, but it’s a head-twister too, thanks to lots of mercurial fretwork and unpredictable drumming. Might make you feel a bit queasy to listen to it, but it’s as perversely seductive as it is macabre. Great song title too.

“Cellar Full of Stiffs” comes from this Bay Area gore-soaked death-grind band’s new album The Deader the Better, set for release on May 13th.

The next song I’ve chosen, “Ohtlatocopailcahualuztli“, is brutally heavy and melodically bleak. It mercilessly pounds and scars the senses with guitar abrasion, erupts in spasms of violence, and features guttural roars and wild yells that are frightening. Gloomy chants and a heartbreaking guitar lead add to the song’s mood of deep agony.

The song is from the forthcoming album Tlazcaltiliztli, which will be released by 20 Buck Spin on May 6th.

Mico is a hell of a good band, but as far as I can tell they haven’t released an album or EP since their 2017 full-length Segunda Muerte, just a couple of splits and a smattering of singles. The latest of the singles surfaced yesterday, and it’s a vivid reminder of the band’s vicious powers.

“Nudo Sordo” is a full-force barrage of rapid percussive mortar fire, flamethrowing guitars, insane screams, and rabid roars. It’s breathtaking in its ferocity, but when the rampant pacing briefly slows, it methodically applies a lead-weighted crowbar to your neck and spins out eerie and hypnotizing melodies that soar.

Now I’m moving away from the viciousness of the preceding two tracks, with a new video of Seattle’s Githyanki covering the Fudge Tunnel song “Spanish Fly“. Their version of the song is sludgy, slugging, noisy, and trippy. It will get you moving, but it’s a bleak and searing experience at the same time, and the wailing guitar has psychoactive properties.

A version of the band’s “Spanish Fly” cover appears on their new album Rollin’ the Dice, which was released in late March — and I need to fuckin’ hear it.

This is another instance where I picked and placed a song because I thought it would pair well with the one that precedes it in this roundup. “Total Noise“, released yesterday as a single by The Sign Records, rocks really fucking hard but it’s also trippy and the vocalist sounds like he wants to tear your throat out with his teeth.

Like the preceding song, this one will also slug you with its grooves, but there’s a hideous beast that seems to be feverishly snarling and feeding on something too, and eventually the song goes into violent seizures. Gotta love the lyrics too, about a human being performing taxidermy on himself.

“Taxidermia“, which takes its name from a bizarre Hungarian film, is from this goregrind band’s sophomore album Parasite, out on June 10th via Spikerot Records.

Time for a clean-singing break with Maerzfeld‘s video for the song “Lange Nicht“. It’s a break from metal too. Dude’s voice is very good, and the song is a big ear-worm, and well, you might have needed a palate cleanser before what’s coming up after this.

Obviously, I couldn’t end this collection with that last song. Need to go to something that’s not only in line with the site’s name but also something that will give you nightmares. What better way to do that than with another new song off the new album by Bog Body, a song that’s as foul as a cesspool, as primitive as neanderthals, and as vicious as a cornered wolverine. Somebody needs to put that hungry growling bass in a cage, or at least feed it some raw meat.

“Dregs Soar To The Skies” is from the album Cryonic Crevasse Cult, out on May 20 via Profound Lore.