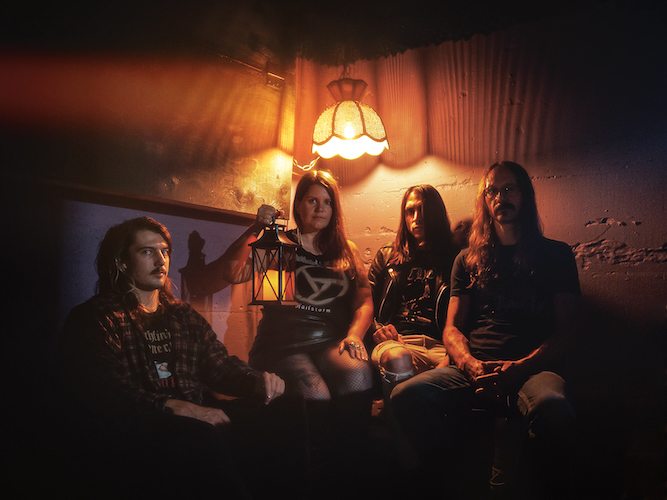 (Temple of Mystery Records will soon release a new album by the Quebec heavy/doom metal band Cauchemar, and that prompted Comrade Aleks to get in touch with vocalist Annick Giroux. We present that discussion now.)

True followers of Doom Cult know Canadian Cauchemar well, and we have good news for them as Temple of Mystery Records are going to release the band’s third album on May 16th. They bear the torch of original heavy metal doom since 2007 and have never failed, providing the best they can.

A die-hard and honest approach, French lyrics, the charismatic vocals of Annick Giroux and melodic guitars of François Patry, accompanied by the rhythm section performed by Andres Arango (bass) and Joel Ladouceur (drums) – all these components make Rosa Mystica an unforgettable experience. There’s some time left before this celebration for old-school metalheads, and we have a conversation with Annick regarding this new release.

Hail Annick! It’s good to know that the band is finally back in the game after this six-year-long break. How are you? What’s new on your side?

We are doing good, thanks Aleks! It doesn’t really feel like we’ve been taking a break to be honest. After the last album, Tenebrario, we did a big tour in Europe and some shows in Canada. François, the guitarist, and I have moved to the countryside and we’ve been very busy with our label, Temple of Mystery Records. We released a song on the Canadian metal compilation Trapped Under Ice that was released in 2018, and then we toured in North America with Pagan Altar in 2019. During all those years, we were working on the songs that became Rosa Mystica. 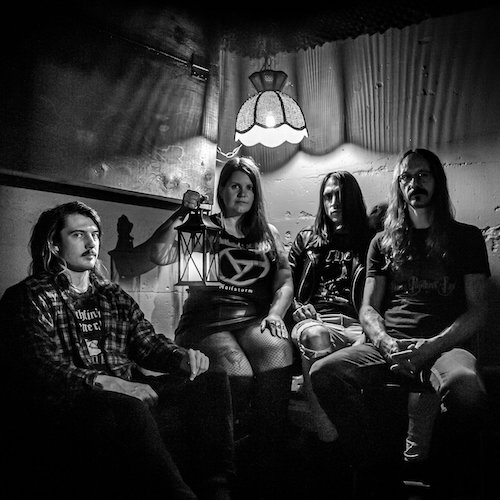 Your first albums Tenebrario (2013) and Chapelle Ardente (2016) leave an impression of very spontaneous, natural recordings. I love the way your new album Rosa Mystica sounds, it keeps Cauchemar’s essence alive and I believe the bands’ fans will appreciate that. Did you aim to keep the vibe of your previous albums on these songs? Or did you allow yourself some tiny experiments with sound or equipment?

Thanks, I’m glad you noticed that! We always strive to do live-sounding recordings… We’ve always recorded the basic tracks of our albums all playing together in a room. No click-tracks. If someone slows down a little, everybody follows, so it ends up sounding organic.

We recorded Rosa Mystica with our good friend Chany from the band INEPSY, who is a true rock’n’roll guy (the stories he would tell us are unreal, hah! He is a legend!!) We had a lot of fun recording (and drank many, many beers) but we still worked really hard. When someone had an idea that sounded interesting, we would try it… not all our ideas passed the test of course. We experimented a lot but only kept what felt natural and sounded good to our ears. 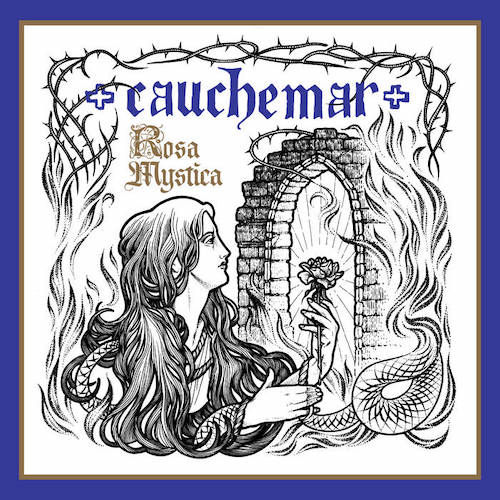 How long did you work over this material? What was the most difficult part of the Rosa Mystica recording session(s)?

We were already working on ideas that ended up on this album when Chapelle Ardente was released in 2016, so I guess the album was five years in the making. We were ready to record in 2020 and had studio time booked but we all know what happened that year… in Canada, we had really strict lockdowns and we were not able to get together and rehearse to be tight enough to record.

In the end, it was all for the best because it gave us time to improve our songwriting! As we all live in different cities (or small town in our case), the hardest part was trying to get together to rehearse. As for the sessions, they were the most fun I’ve ever had in a studio. Everybody was completely into it and everything worked seamlessly. The chemistry was very, very strong, and I think you can hear it on the recording.

I was going to ask it directly, but I’ve double-checked that and I found only that “Rosa Mystica” is “a poetic title of Mary”. What kind of message did you put in the album’s title? Is it about your new “magical experience”?

Our albums always have a main theme uniting all the songs. This one is not about the virgin Mary at all, but a mystic who is burnt as a heretic in a time of war. We always use our songs to say things about the world as we see it. This one could be about any era where people had to live with violence and oppression, which is sadly a reoccurring theme with the human species.

What will happen if one would try to play your new songs backwards?

I wouldn’t recommend it. Backwards, the words will invoke an incubus that will make its home in your dreams. I haven’t figured out the way to make it go away yet!

The world turned to be a worse place since we talked last time (doom-metal.com, 2015). Does the world’s current agenda change your attitude toward Cauchemar?

We have always sung about ancient ruins, medieval legends, and old magic and these things haven’t changed in the current climate. We are stuck in the past both musically and lyrically, so to say. And perhaps in our ways of being, too!

What are your plans regarding Rosa Mystica’s promotion? Do you have an opportunity to support it with gigs?

We are currently rehearsing in order to play a couple of shows this summer in Canada, perhaps some in the fall as well. We are also working on a small tour in Europe next spring – It won’t be as long as the last one, maybe five or six shows. We want to take the luxury of staying longer in the places we visit, instead of just playing, sleeping, and driving to the next show. If you want us to play your town and it fits our itinerary, feel free to get in touch!

Cauchemar is tagged as a “heavy / doom metal” band, and that’s pretty precise definition — I think there’s nothing to argue about. However, which bands formed your “doom” tastes?

Well, as for most people, my gateway to doom was falling in love with Black Sabbath which sent me on a quest to discover other bands with a similar mood. The first ones I got into were Cathedral, Pentagram, The Obsessed, Witchfinder General, and Saint Vitus… then, through Cathedral, I got Paul Chain’s Alkahest which led me to Italian doom. Those are still my favorite kinds of doom: majestic British doom, hard rockin’ American doom, and purple-tinged Italian doom.

Do you care about the “wrong” use of the “doom” tag, as sometimes we can see it on bands which perform anything from stoner to sludge or post music?

I’m into the traditional doom I grew up with. What people call doom now is completely different, so if I see a band’s style described as “doom metal”, I probably won’t listen to it unless I see a reference to classic doom bands in their description. But “doom” is just a name. Trouble was almost speed metal in the beginning. The Obsessed is a hard rock band. Cauchemar is as influenced by bands like Motörhead and Judas Priest as we are by Black Sabbath. It just makes it harder to find bands nowadays, but luckily we have websites and journalists like you that help traditional doom stand out from the crowd! Cheers!