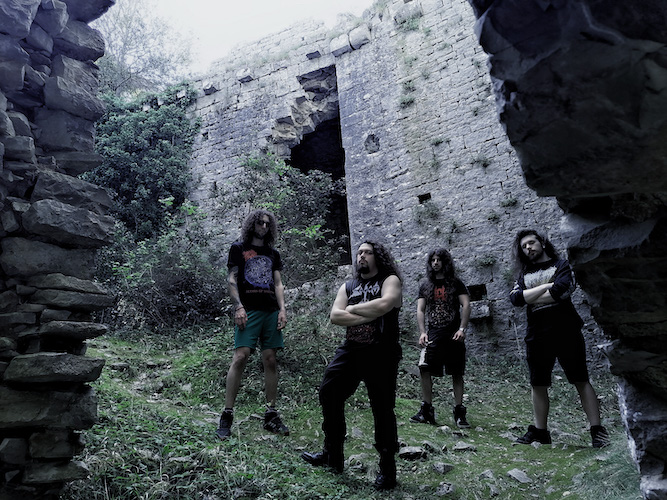 (The Italian band Burial’s latest album has been out for a while, but better late than never, Comrade Aleks has caught up with Leonardo and Enrico from the band and presents this interview with them.)

So what else is there? Another death-doom band with references to H. P. Lovecraft’s mythology?  SHUT UP AND TAKE MY MONEY! Well, yes, okay, okay… I’m ok, really…

When I see such tags, I send a message to the band immediately but somehow I skipped Burial’s release Inner Gateways to the Slumbering Equilibrium at the Center of Cosmos which saw the light of day through Everlasting Spew Records eleven months ago.

The band itself was founded by Leonardo Bellavista (guitars, bass) in 2012, and soon he got the company of Enrico Fagni (bass, vocals). They worked through Burial’s concept together, recording The Forgotten EP (2019) and the demo Presence from the Beyond (2019). The band remained a duet until 2020 when Samuele Scalise (drums) and Morgan (guitars) joined them in their unholy mess. All of the band’s members have rich experience as they spent many years in the Italian metal underground and played in different bands whose styles ranged from progressive thrash to death metal.

Burial stays far from regular death-doom, as these maniacs prefer its torturous form with a heavy emphasis on dirty and twisted death metal, but you know – Leonardo and Enrico can tell you that better. Hail Burial!

Hail Burial! How are you doing? What’s new on your side?

Leonardo: Hi and thanks for reaching out to us! We’re in a very good phase of our career right now. Inner Gateways… is doing very impressively, we’ve played in the awesome Helsinki Death Fest, and the Slumbering Pillars Over Europe fest is approaching really fast, plus a mini tour with Void Rot which will lead up to the Death Over Rome fest, where we will play alongside Mortiferum and Cerebral Rot! It’s really a great time for us.

Sounds good! Did you play shows like this before? How did you manage to get on these fests?

Leonardo and Enrico: Nope, this was the first time for us. We’ve recently played in Helsinki Death Fest though and it has been amazing. This mini tour will be a great trial for us as a band.

We’ve had the opportunity to play in those scenarios thanks mainly to all the fans and supporters, many of the other bands in the scene, and of course because of: Despise The Sun recs, Dismal Fate recs., Killtown Bookings, Goat Throne recs, all the awesome youtubers and reviewers and journalists who talked about us, Everlasting Spew recs., all the labels and distros who bought our stuff, and Death Over Rome Bookings. As you can see it’s a matter of many many people, not just one or two people. 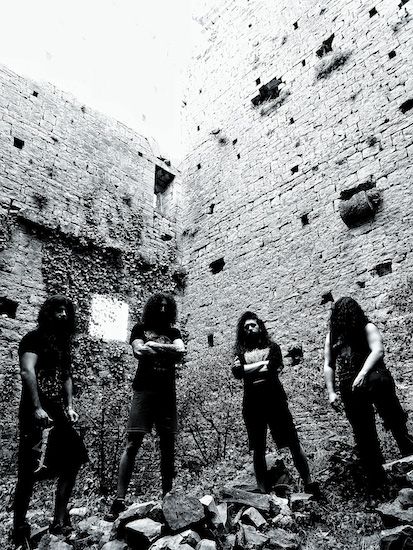 Speaking about Burial’s origin – I see that the band was formed in 2012, but there was no any action until 2016. How did you spend those first years?

L.: The band started as a solo project by me in 2012, and it was going on for some months where some songs were written, like ‘The Guardian of the Gate’ and ‘The Monolith of Dagon’ that was later released on our first demo in 2016. After those months the project went on hold and took back to life in 2016 when Enrico F. joined the band.

All Burial members have different musical backgrounds and played in different bands, so how did you share the responsibilities between each other?

L.: Everybody put something of their backgrounds in Burial, not just the music. We usually find a common ground in everything: from the staging of the live performances, to the songwriting and so on.

And who’s responsible for the lyrical concept?

L.: All the lyrics are written by Enrico F. but all of us try to put hints in his “bag”, so that he has multiple sources to virtually take inspiration from.

Lovecraft, Space and Horror are themes of your lyrics according to Metal-Archives, so do you agree with that?

E.: Yes that’s the main focus. But right now we’re trying to expand a bit with other themes that may tie in with the core “mood” of the project. We don’t like to kick the same ball for too long but we don’t wanna lose identity either.

Which of H. P.’s stories inspired you besides Dagon and From Beyond?

E.: If we talk specifically about Lovecraft’s work, we can pretty much say that all the 1614 pages of Howard Phillips Lovecraft – Tutti I Racconti is the overall inspiration. It’s an extensive gathering of all the novels and correspondence of the author, I think it’s like “The Complete Fiction”, for non-Italian readers. So yes, Howard has been almost fanatically worshipped in the early years. Then I decided to expand a bit, because “why not?” Now inspiration can come from a vast array of themes: old religions and traditions, the occult, movies, videogames, comic books and graphic novels, mangas and anime. There’s plenty of nightmare fuel to be driven by if you’re someone who can enjoy stuff from Horror In Bowery Street to Shiver by Junji Ito.

It looks like you’re more into that cavernous and torturous death metal but it’s balanced with a good share of death-doom. Do you see Burial as a result of influences from both genres or… or what?

L.: We love all types of death metal, from American to the Swedish ones but the band was always more focused on the Scandinavian style. Over time we’ve pass from a pure Dismember / Entombed style to a “doom and gloom” almost funeral approach, more like the Finns did back in the mid ’90s. The result is a mix between Scandinavian / Finnish death metal and the US death-doom type of atmosphere, but we always experiment with new stuff and sounds just to not be a copy of someone (even ourselves).

Inner Gateways to the Slumbering Equilibrium at the Center of Cosmos was re-released as a vinyl edition. How do you like it? Do you think it’s a higher status format still?

E.: Personally, no. It’s an interesting format, and fans demanded it, but I don’t really like it that much. Our primary format is tape. We’ve recently revealed that Goat Throne Records will release an exclusive tape run for the U.S. market and people just went crazy. Our fans came to know us on tape and we should always have a tape release in my opinion.

L.: For me vinyl is the definitive type of release, I collect LPs and it was awesome to have Inner Gateways printed in that format with such good quality, but as Enrico said, tape is very important too and it will remain the main format for our music.

How often do you receive feedback from abroad?

L.: People keep sending feedback constantly and this is a really nice thing: we can see if our work is appreciated or not and in what measure. Of course negative feeds are welcomed but from what we’ve seen, there is almost never a totally shit opinion. Maybe mostly negative but totally “head in the ass”? Very, very unlikely. And we’re happy with that!

The feedback was really good from the first day we announced the artwork and the first single. We’re proud of our work but we didn’t expect this type of feedback — people are enjoying the record, buying merch and we’re playing lots of shows right now, so we can’t ask for better results for a debut album.

And what about others bands? Do you keep in touch with some bands with whom you would like to release a split-album for example?

L.: We’re in contact with many bands over the world and we’re building contacts to play and to share ideas as much as we can. There is something in the works regarding split-albums — y’all can expect something in the next months.

By the way, how do you see Burial’s place in the Italian and world extreme metal scenes now? What are your ambitions? Do you see a way to climb to a higher level or do you feel yourself comfortable in this part of the metal underground?

E.: Our goal is to grow in our context and give ourselves to the Music as much as possible. We don’t place ourselves on top of others frankly: Inner Gateways… shook the waters a bit but was still “our” pond and we do not see it as something more than a good release, even in that context. And on top of that there are a ton of bands, just in Italy for example, who can kick our asses ‘till we’re out of ‘em in terms of fan reaction and worldwide reception alone. We know our place and we’re happy with it.

What are your memories regarding the recording sessions for Inner Gateways to the Slumbering Equilibrium at the Center of Cosmos? Was it an easy ride? What kind of result did you aim to reach?

Enrico and Leonardo: The recording process went smoothly for every instrument. We recorded the entire thing at Leonardo’s recording studio (Void Studio) except for drums, and mixed and mastered at he same place. As the recording process went on we tried to add many things, like building atmosphere and messing with the sound to be old school but “progressive” at the same time and tried to create new things. The results came out how we intended them to be, cavernous, old school, dark but clear in the right way, not so confused that you can’t distinguish the single instruments. 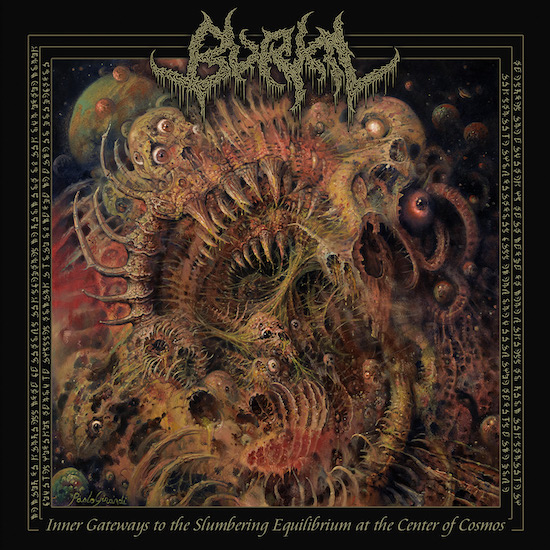 How did you collaborate with Paolo Girardi who created the artwork? Did he express everything you wanted to manifest through it?

L.: Yes and then some! The idea started back a couple of years ago when Girardi was on a streak of very impressive artworks (Power Trip, Hyperdontia and so on) so we thought that he was the right choice to represent the feel behind the music. And Paolo did it: he took the core theme of the title track and molded something astonishing on that canvas. We really, really love that painting.

What are your favorite metal artworks?

L.: Everything that is sci-fi is my jam. My absolute favorite artwork is Focus by Cynic and I want to include Crimson by Edge of Sanity, Thresholds and The Key by Nocturnus, and Killing Technology by Voivod, to name a few.

And what about new material? Do you already have some new songs for another full-length?

L.: We’re working on something but there’s no material well fit for another full-length right now. We’ll see as time progresses!

Okay, then we’ll return to this topic next time! Thanks for the interview guys! Any final words for our readers?

L.: Thanks to you guys for the interview and for giving us some of your digital space.

If anybody reading don’t know us, check out our latest record Inner Gateways to the Slumbering Equilibrium at the Center of Cosmos and come to see us on our shows and share  beers together, stay cosmic!

E.: I wanted to thank everyone involved so far in the project, fans and supporters and all the friends we’ve come to know in the years. There’s more to come in the next years, hope you’ll be with us!

One Response to “AN NCS INTERVIEW: BURIAL”