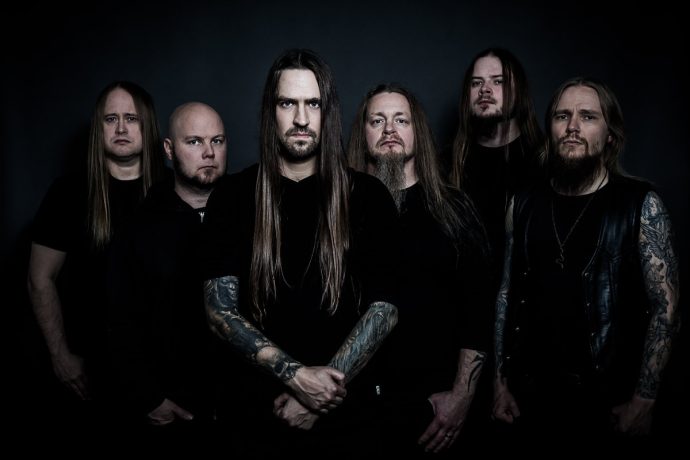 I mentioned last Sunday (and again on Monday) that I wasn’t feeling well, as an explanation for why I didn’t get very much done for NCS last weekend. I also mentioned that I spent that weekend in southern California at a gathering of co-workers from different cities. Within days of everyone getting back home, a half-dozen people reported testing positive for covid, all of whom were fully vaccinated.

I had tested before going on that trip, took another test while I was there, and tested again five days after my last close contact with those people — all the tests were negative. But I’m still feeling sub-par, still congested, sniffling, and lethargic, for the second week in a row.

I don’t know what the hell I have, but there’s obviously a lot of respiratory virus blooming in the country besides covid, with different strains of cold and flu making a triumphant comeback after a couple of years of masking and quarantine restrictions left them lonely. You can take your own lessons from this, but I’d advise you to be careful.

It might be my hopeful imagination, but I think I’m marginally better today than before, or at least feeling well enough to go exploring new music and videos again. Here’s some of what I found (I ticked off a lot of genre boxes with this compilation, plus a couple of elliptical band names): 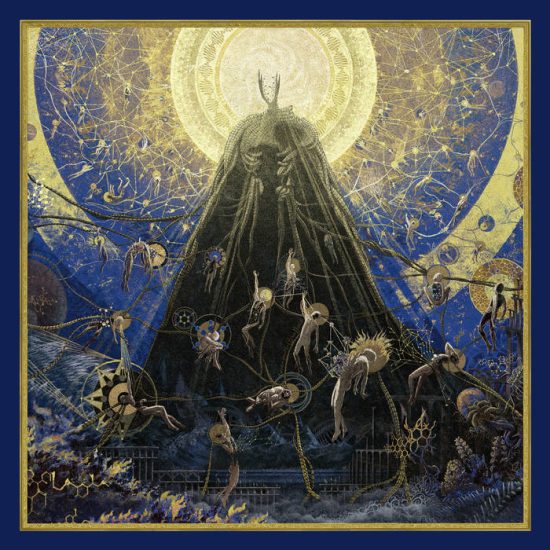 I’m beginning with two videos for two songs off a new album by …And Oceans. The first of them features a stunning video by Guilherme Henriques for an equally stunning song named “Cloud Heads“. It came out a month ago but I only caught up to it today. The other one is a studio video for “The Collector and His Construct“, which came out three days ago.

Mathias Lillmåns‘ vocals in both of them are shattering in their intensity, and the fiery intensity of the music is at an equally high zenith. There’s plenty of symphonic sweep and bombast in the songs, plus bits of darting electronics and drumwork that’s both neck-snapping and riotously unchained. Sometimes it feels like the skies are on fire, and sometimes the turmoil feels dire and daunting.

The name of the new album is As in Gardens, So in Tombs, and it will be released via Season of Mist on January 27, 2023. The cover art was made by Adrien Bousson.

P.S. Sólstafir‘s “Ótta” showed up right after “The Collector and His Construct” on YouTube, and it made for an unexpectedly great pairing. 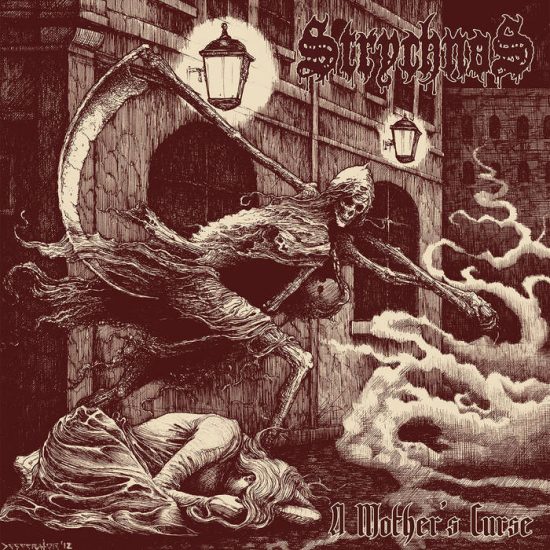 Shifting gears, I’m now turning to “Blessed Be the Bastard Reign“, which was released through a video (filmed and edited by Martin Goltermann) that prominently features the terrifying, blood-drenched countenance of Strychnos vocalist Martin Leth Andersen, who really throws himself fanatically into the performance.

As a match for his diabolical voice and deranged countenance, the song’s blending of black and death metal is muscular and hard-slugging, viciously demented and methodically brutalizing, and altogether electrifying.

The song is from Strychnos‘ debut album A Mother’s Curse, set for release on November 4th by Dark Descent. The cover art is by by Daniel Corcuera Urzùa. 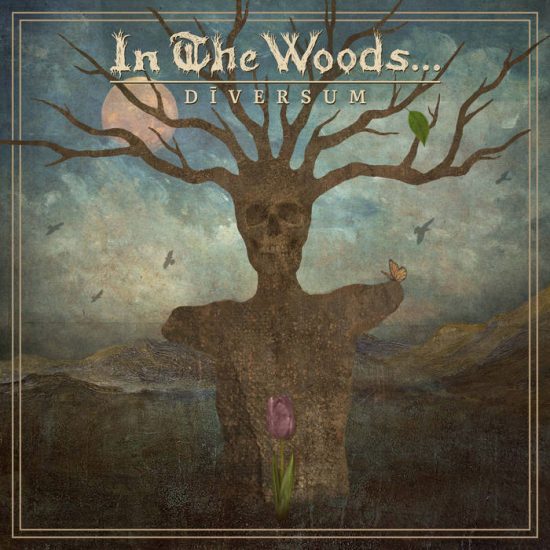 IN THE WOODS… (Norway)

In the Woods… have a new album named Diversum due for release on November 25th by Soulseller Records. It features new vocalist Bernt Fjellestad as the replacement for James Fogarty, who was behind the mic on the band’s last two comeback albums, Pure and Cease the Day.

The song below is “The Malevolent God“. You’ll learn that Fjellestad can sing in gloomy yet seductive tones, and he can fly high and snarl like a beast too. The music itself is also a variable experience, creating sensations of towering and ominous grandeur, spellbinding splendor, haunting melancholy, and sinister menace. There are some throbbing, headbangable riffs and skull-smacking drum beats in the mix too, along with a serpentine and screaming solo. 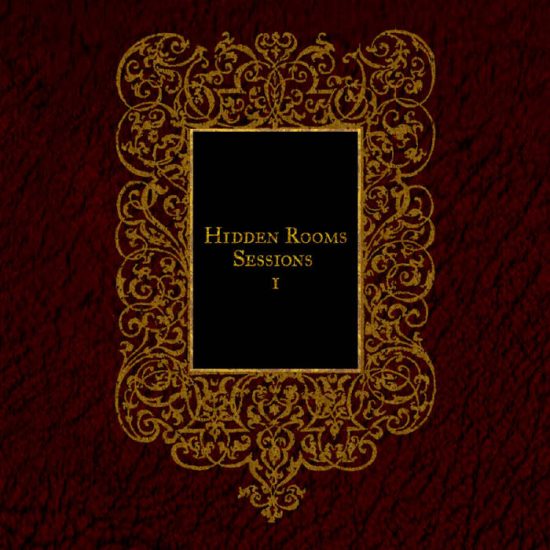 “An Empty Hand Has Nothing to Give” is the first song revealed from Hidden Rooms Sessions I, a new album by this Tunisian black/doom band (the solo work of Angra Mainyu), which is advertised as the first chapter of a new trilogy.

The song rocks and rings in immediately infectious fashion, creating a vivid pulse, but it becomes spacious and gloomy, with uber-deep gnarled vocals and mystical but sorrow-stricken ambient waves and brittle guitar echoes. As the sound softly shimmers, maybe you’ll see an unsettling desert mirage under a half-moon, and drift into a spell. A lonesome strumming heightens the spell, but eventually the music swells in power and becomes disturbing in its rendition of calamity.

The album will be released by Xenoglossy Productions (Italy) and Hidden Rooms Recordings (Tunisia) on November 11th. 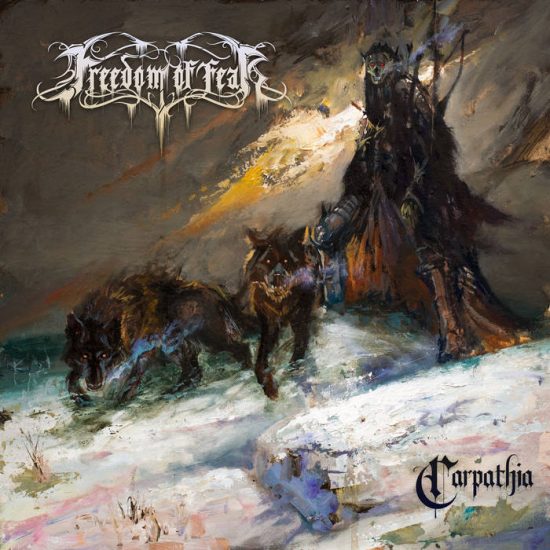 This Adelaide extreme metal outfit released their new album Carpathia via EVP Recordings on October 21st. So far, however, I haven’t made it past the opening track “Zenith“. My NCS comrade DGR refers to such songs as “barriers to entry”, because as album openers they’re so damned difficult to let go of and move on from.

Like the other songs on the album, this one features Hannes Grossmann (Necrophagist, Obscura) on drums, and that’s fitting because the other instrumental performers (Matt Walters, Corey Davis, and Georgina Kittel) are also technically virtuosic. I didn’t know what to expect, but they make “Zenith” a head-spinning adventure.

The instrumental escapades are exuberant and exhilarating (the soloing is especially spectacular) but there’s a feeling of dangerous lunacy in the music too, a feeling heightened by vocalist Jade Monserrat‘s cauterizing screams and barbaric roars, and when the band start jolting your spine, the music becomes downright predatory.

The song comes with a video by Third Eye Visuals, and the roiling storm and lightning flashes in the visuals suit the electrifying music very well. The great cover art was painted by Adam Burke. 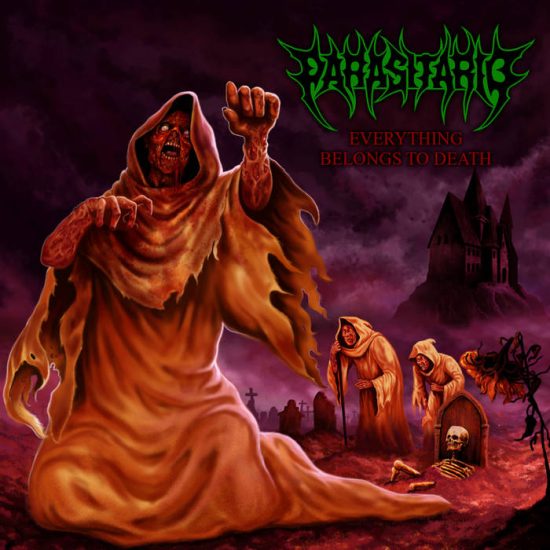 Now it’s time for some good old rotten death metal, with a song named “Devouring Parasites” off this Japanese band’s debut album Everything Belongs To Death.

Prepare for massive, grinding and skittering riffage, bone-busting drum gallops, freakish soloing, and raw and ragged vocals that sound both noxious and carnivorous. It will get your pulse-pounding, give your spine a good jolting, and probably get stuck in your head. The band also shift into a slower gear, and the extended solo there is the kind of wailing and slithering manifestation of the supernatural (backed by riveting drum fills) that’s just right for Halloween.

Everything Belongs To Death will be released on February 17th by FDA Records. The cover art is by Dedy Badic Art. 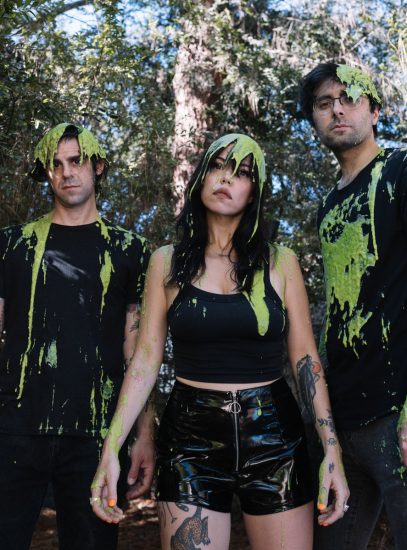 To conclude today’s round-up I’ve got one last turn in the genre-path, and it’s a big one. What you’ll find below is a stream of Giver, a debut EP by the L.A.-based trio Pegzilla that was released on October 14th.

On Giver, guitarist/vocalist Olivia Saperstein, bassist Spencer Robinson, and drummer Jeremy Lombardo indulge their interests in doom and stoner rock, and although I will admit that those genres aren’t among my favorites, this EP got its hooks in my head really fast, and they stayed there.

These four songs check off lots of boxes — burly riffs that have the power to move a body like a steamroller, trippy solos both bluesy and psychedelic, eerily quavering keyboards, carefully placed drum strikes that snap the skull, fuzz-bombed bass lines that will vibrate your fillings, and a shape-changing siren’s voice with impressive range.

On top of all that, the vocal and instrumental melodies have big hooks and they weave varying moods — sinister and forlorn, seductive and narcotic, witchy and wild. Pegzilla also pick their moments to pick up the pace and punch the adrenaline trigger, so things don’t get too woozy.