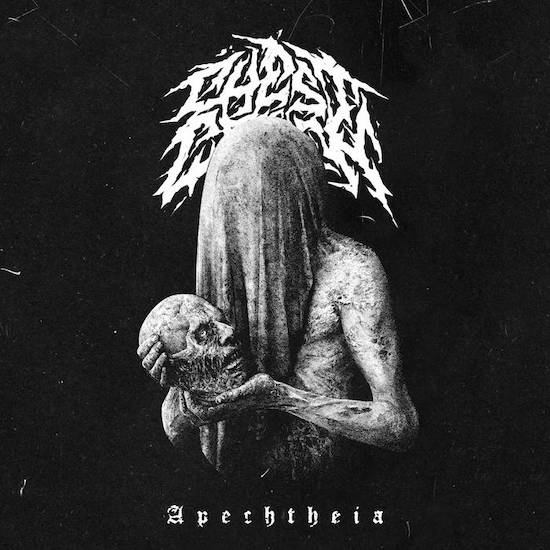 (A new three-track ChestCrush EP has been out in the world for about a week, time enough for DGR to feel comfortable giving it the following review, for those who might have overlooked it.)

ChestCrush is a project we arrived at late in the year 2021. The international group’s first full length Vdelgymia was one that had hovered on the periphery for some time that year, and whenever we got the chance to share it with people, we would bring it up. It’s how the song “Grudge” wound up being spun during one of our Gimme Metal invasions, and we even argued for the brutally rock-headed “Different Shepherds, Same Sheep” as one of the most infectious songs of last year before that list performed its duties and was sent out on an ice floe.

Given that ChestCrush have resolved themselves into a year-over-year churn at the moment, it seems like you can’t discuss the group’s latest EP Apechtheia without lookng at its older sibling, because these are two very distinct releases from one another, not just in terms of musical content but also in terms of lineup: Apechtheia marks the first time that main musician Evangelos Vasilakos has united with Australian drummer Robin Stone and Texas-based death metal vocalist Topias Jokipii. 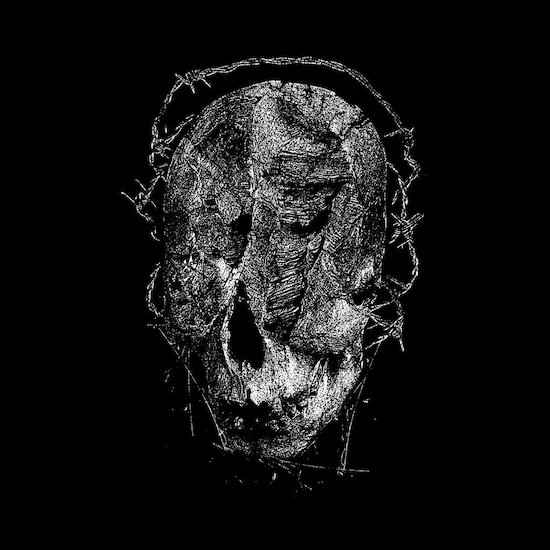 Vdelgymia was largely a two-person effort that was ruthlessly efficient in its bleak and overwhelming violence. When you have nine songs and manage to come just short of a twenty-nine-minute release, with most of your tracks around the two-minute-plus mark, you know there’s zero room for self-indulgence. It was just one visceral hammering after another, each at a maximum level of intensity and buried within a wall of distortion and drumwork that erred just on the side of feeling inhuman. One’s first go-around with Vdelgymia is a deafening experience and also one that, by the end, when you put two and two together between the cover-art, the near-fatalistic song titling, and the group’s name, becomes a release that makes a perfect sort of sense.

The recently released Apechtheia, on the other hand, suggests a different game is in play, with only three songs on its track list yet somehow only twenty seconds shorter than its full-length predecessor. If it seemed like two-to-three-minute excursions with ChestCrush were getting to be a bit intense, now it’s time to see how they do when the songs get into the nine- and ten-minute range.

Initial impressions when seeing song lengths like that suggest that ChestCrush might’ve launched themsleves fully into the vaults of doom. But repeated spins of Apechtheia show that isn’t fully the case. Instead, the current ChestCrush lineup take advantage of the prescribed song lengths in order to fully unleash an auditory despair on the world, like a stormcloud that is permanently above one specific location.

There are absolutely moments throughout Apechtheia where the crew take advantage of the time available to them for extended moments of slow, hammering drums and echoing guitars. But it isn’t quite as much stretching as you would expect from something making its tentative dalliances with the slow-moving bleakness of doom. If anything, it’s “Repression” – Apechtheia‘s closer – that will likely turn heads because it is ten minutes of ambience and occasional banging noise, like the world’s slowest plumbing job, which stands in pretty stark comparison to the maelstrom that lay ahead of it.

A song like “Misery. Decline. Death” plays out like it has three actual movements within it, each written to match the singular descriptor in its song title. All of them – emphasis on on All – are bludgeoningly heavy and it does feel like the one song alone could’ve constituted the entirety of the EP. There’s certainly a moment after that initial death metal hurricane closes its doors and things calm down when it feels like Apechtheia is wrapping up, only for a quick glance and the revelation that “The Despiser” is just fading in with a mission to destroy everything that lay in front of it that it occurs to you, “Oh, there’s at least one more of these in the chamber’.

“The Despiser” in particular is just one big eight-minute block of oppressive beatings with no room to let up. It is consistently heavy throughout and even the minute or so of feedback that it uses as a closer is fine when set alongside the furnace of music that was the seven minutes before it.

Apechtheia is an interesting evolutionary peak at where ChestCrush may be heading in the future. While it’s unlikely another full-length will see the band attempting another ten minutes of dark ambience to close out the city-destroyer that leads up to it, Apechtheia does show that whether the group decide to go long-form or back to their previous short-bursts of intensity, they’ve got their formula to drown the world in murky-blackness down to a science already.

The two legitimate death metal hammerings within Apechtheia are up there with some of the most intense released this year, and it seems that for a band whose starting point is already at “head stuck in the boiler room furnace’ mode”, they still know how to make songs that don’t just reduce that feeling to a bland “normal”. Apechtheia is an impressive EP following an already impressively dark full-length.