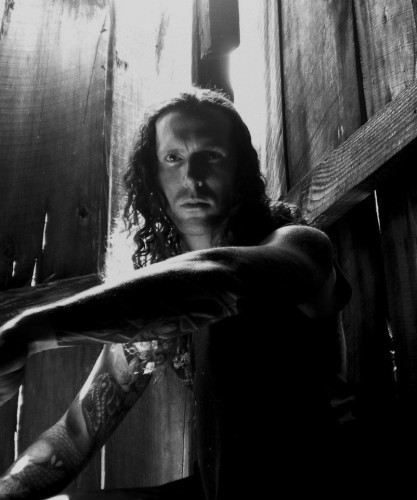 (NCS Russian contributor Comrade Aleks interviews Archie Hunt of North Carolina’s Atten Ash, whose excellent new album The Hourglass was released by Hypnotic Dirge Records in February and whose similarly excellent split with Lycanthia was released by the same label in January.)

Hypnotic Dirge surprises me again! The label has another killer release after a one-year hiatus, and this time it’s by a melodic death-doom band from North Carolina named Atten Ash. The band’s name literally means “near the ash”, and this trio has created a fantastic – and I use this word very rarely – a really fantastic album, The Hourglass. The album was completed three years ago for digital release by the band, but lay on the shelf until Hypnotic Dirge suddenly found it.

I think you need to know that the band consists of three members – Archie Hunt (who roared with Legion of the Fallen) on vocals, with James Greene responsible for the great clear vocal parts and most of instruments, and Barre Gambling of Daylight Dies playing guitars and keyboards.

The Hourglass is a perfect gift for those who like the old death doom stuff of Katatonia from the Brave Murder Day period, the progressive and emotional works of Opeth, and the melancholic and melodic works of Daylight Dies as well. Without any delay we’ve done this interview with Archie Hunt, with the help of Nic Skog, the head of Hypnotic Dirge. END_OF_DOCUMENT_TOKEN_TO_BE_REPLACED

The song is more than 17 minutes long. Almost all of it is a flame-throwing mindfuck — a berserker blastwave of boiling-in-oil vocals, maniacal drumming, shrieking guitar dissonance, and frenzied bass lines. Except for an unexpected acoustic breather, it’s always just a hair’s breadth away from coming apart at the seams, but I found myself in its grip. Maybe I was just waiting to see if it could succeed in melting down my headphones into a pile of slag. END_OF_DOCUMENT_TOKEN_TO_BE_REPLACED