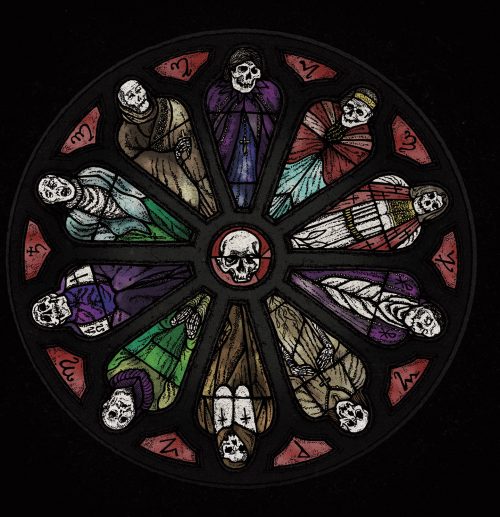 On September 26, Invictus Productions will uncage Beasts of Faith, the debut album by the Swiss band Deathcult. One of these beasts has already been pulled into the spotlight from the shadows by DECIBEL magazine, and today we do the same for a second one — a song called “Death In July”.

For discerning listeners, Deathcult’s first demo in 2012 made quite a strong impact and their 2014 EP Pleading for Death . . . Choking on Life only confirmed that Deathcult were a distinctive cult worth watching. In those earlier years the band’s profile no doubt benefitted from the presence in the line-up of vocalist/guitarist O. Ketzer of Bölzer, but Beasts of Faith proves that Deathcult’s talents run deep and remain strong without him on this new album. END_OF_DOCUMENT_TOKEN_TO_BE_REPLACED

I’ve got a few shorter releases to share with you today. I’m calling it an EP special, but for good measure, I’m tossing in a split and a graphic novel(!) too. I’ve also shortened down my ramblings to leave you sore-eared rather than sore-eyed. Enjoy. END_OF_DOCUMENT_TOKEN_TO_BE_REPLACED

Deathcult released a four-song demo in 2012 that I haven’t yet heard, though it’s available on Bandcamp, and earlier this year Me Saco Un Ojo Records released a new vinyl EP entitled Pleading for Death… Choking on Life (copies are still available there and elsewhere). END_OF_DOCUMENT_TOKEN_TO_BE_REPLACED