As a result, 2018 proved to be an absolutely massive year. In some ways I think people’s year-end lists are reflecting just how vibrant the year was for our specific subsection of the musical sphere. While people lament that rock ‘n’ roll is dying or has become lame, heavy metal seems perfectly content to just be the constantly angry and forever roiling collective of music — as if it has found a sort of equilibrium in comparison to the mainstream world outside. Which is how you wind up with stupid shit like this, where I once again have FIFTY (warning ahead of time: if you think this introduction is getting verbose, do I have a surprise for you) albums to talk about in wrapping up this tire fire of a year. END_OF_DOCUMENT_TOKEN_TO_BE_REPLACED 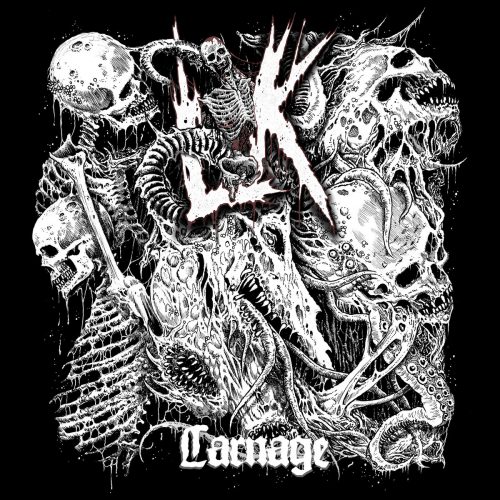 Every once in a while I pull the curtain back to reveal what the reveiw-writing process is like on this end, and Lik’s newest album Carnage provides the occasion for one of those times. It has been exceedingly difficult for me to review this album, not because Carnage is bad but because I have a very hard time with albums that are very clear about what they are trying to be, and when they nail that note so specifically and so well, it’s hard to talk about them without coming off as being on some sort of high horse. END_OF_DOCUMENT_TOKEN_TO_BE_REPLACED