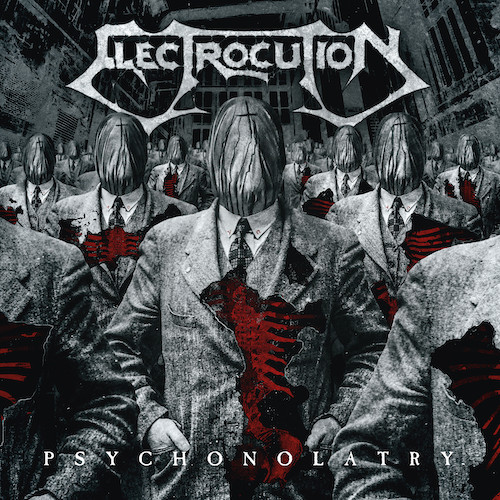 If you were somehow ignorant about the history of the Italian death metal band Electrocution, you might guess from their possession of such a prized extreme-metal name that they first came to life a long time ago, and you’d be right. Originally founded in 1990, they’re rapidly approaching their 30th birthday. Not uncommonly for a band of such a vintage, there have been numerous line-up changes over the years, but founding vocalist/guitarist Mick Montaguti still leads the band, and on Electrocution’s new album Psychonolatry, he’s joined by other musicians whose astonishing performances, along with his own, send this record into the stratosphere.

Electrocuton haven’t been prolific in their releases. Two decades passed between the band’s first album and their second one, and this third one follows the second by five years. But once you listen to Psychonolatry — which we’re giving you the chance to do right now — you’ll quickly realize that something this extravagant couldn’t have been accomplished without a lot of careful planning, tremendous care, and a ton of hard work. Things like this don’t grow on trees, and they don’t get thrown together quickly. END_OF_DOCUMENT_TOKEN_TO_BE_REPLACED