What a damned fine way to help start the day: Haggis and Bong have released a new video.

I’ve been pimping this South African band since January 2010, when they were just two pipers and a drummer. They’ve filled out since then, adding electrified instruments, turning into a more recognizably metal band. But the Highland bagpipes are still what make Haggis and Bong special. That, and their name.

Their new video is for a track from their latest album, Of Myth and Legend, which can be downloaded from CDBaby (here). The song is called “Revelation of the Gods”. It includes a hard-driving rhythm and two kinds of shred: the skirl of the pipes, of course, and a very cool guitar solo. The video is also really well-done (kudos to director Ross John Warwick and cameraman Theo Crouse). It’s a swirling performance clip, enhanced by shots from Go-Pro-type cameras mounted on the instruments, cool lighting, and some nice visual effects.

Watch it after the jump. That’s an order. END_OF_DOCUMENT_TOKEN_TO_BE_REPLACED 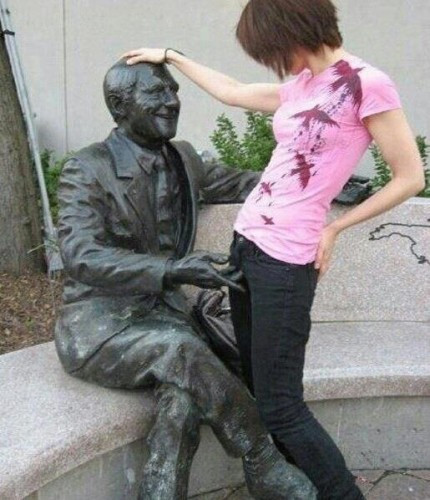 Since those early days they’ve expanded themselves into a genuine metal band — but one in which the pipes still play a prominent role — and today they’ve released a free single that’s their heaviest work yet. In addition to including some mosh-worthy distorted riffing and pounding rhythm work, “Battle Destroyer” incorporates the pipes in an unusual way — no jigs or reels this time. Check out the song after the jump and go download it here if you dig it as much as I do. END_OF_DOCUMENT_TOKEN_TO_BE_REPLACED

As for Scottish (and Scottish-themed) metal, the line-up after the jump is a mix of new, newish, and older music from three Glasgow bands (Man Must Die, Cerebral Bore, and Achren), one from Edinburgh (Zillah),  and Haggis and Bong (okay, they’re from South Africa, but how can we write about Scottish metal without including some new bagpipe shred?). END_OF_DOCUMENT_TOKEN_TO_BE_REPLACED 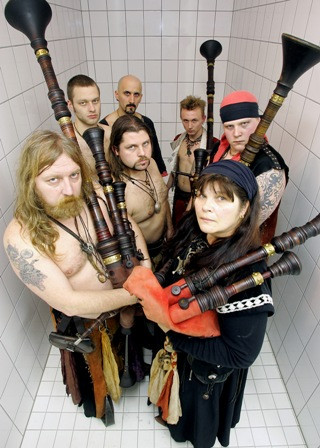 First, this band appears to have not one but five pipers. Second, the ends of the drones on their bagpipes look like the flared mouths of ancient muskets. Third, Schelmish also have some gargantuan drums to accompany the bagpipes. Fourth, the band members themselves are gargantuan (with the exception of one whippet-like piper who looks like Johnny Rotten). Fifth, they can really jam. Sixth, the song is called “Chaos”, and the music lives up to the name. END_OF_DOCUMENT_TOKEN_TO_BE_REPLACED 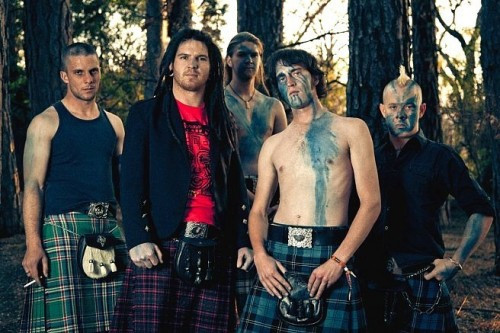 When we last checked in with our favorite bagpipe-driven metal band from South Africa, Haggis and Bong, about a month ago, they had just made four songs available for free download on their ReverbNation page. That ended a long dry wait for us. Finally, we had the ability to carry H&B songs around with us so we could get skirled to death by the music whenever the fuck we wanted!

A month ago, we also learned that Haggis and Bong had expanded their line-up to include, in addition to the Highland pipes and drums, a bass player and a trombonist. We wondered how the addition of a bass would affect the sound (we thought it would likely make it more metal), and of course, everyone knows that a metal band without a trombone is like a three-legged dog.

And now we know — because Haggis and Bong have added a new song to their ReverbNation player called “Celtic Force” — and it includes bass guitar and trombone!  That player also includes an upload of yet another song from the band’s 2008 debut, Fire in the Bowl.  That one’s called “The Plague”. And you can download both those new songs (in addition to the previous four) at a cost of nothing more than a mouse-click and a dirty thought.

And since we know our readers oh so well, we know all this will really cost you is the mouse-click. (more after the jump . . .) END_OF_DOCUMENT_TOKEN_TO_BE_REPLACED 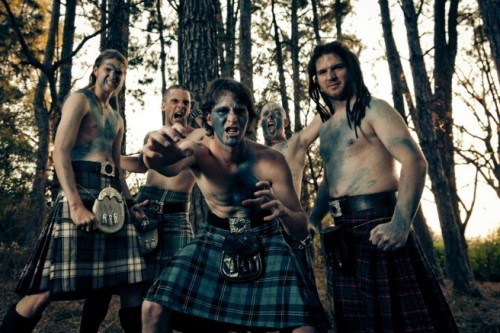 That got your attention, didn’t it?

Some small number of you might have been visiting this site back in January and some even smaller number might remember that we wrote then about a South African band called Haggis and Bong. Maybe more will remember than we think,  because that’s a name you don’t easily forget.

Yes, you read that correctly.  This was an instrumental metal band that consisted of nothing but bagpipes and drums. But man, could they rip the hell out of a song, combining a furious double-bagpipe attack with lots of blast beats and double-bass.

Now, the line-up has expanded, and Haggis and Bong have added a full-time bass-player, as well as guest musicians, including a trombonist.

Back in January, the band had released one album, brilliantly entitled Fire in the Bowl.  Only problem was that unless you could catch a live show in South Africa, there was no fucking way to get a personal copy of the music.

Ever since January, we’ve waited and watched and searched, and there has just been no fucking way to download the tunes, either legally or illegally. We were completely hostage to the Haggis and Bong MySpace page. Now, finally, that frustrating situation has changed! (more after the jump, including Haggis and Bong music to hear . . .) END_OF_DOCUMENT_TOKEN_TO_BE_REPLACED 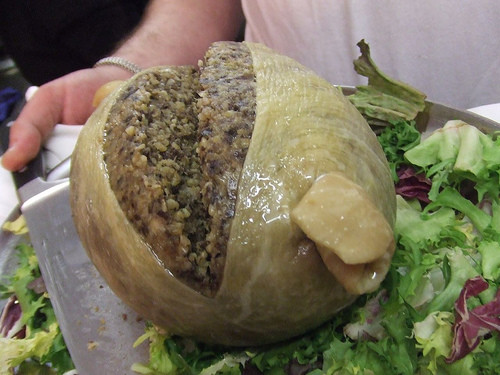 Following the above intro was a list of those 21 bands scheduled to play at the “MotherFUDD” festival, including — you guessed it — Haggis and Bong. (more after the jump . . .) END_OF_DOCUMENT_TOKEN_TO_BE_REPLACED