Of the four records in this post two of them come from bands I’ve written about before and two are newcomers, including this first one, a new Icelandic black/death metal project organized by members of Ophidian I. Their self-titled album, released on December 21st, was recorded in part by Studio Emissary’s Stephen Lockhart and was mixed and mastered by him, and that’s why I paid attention to it. Glad I did. END_OF_DOCUMENT_TOKEN_TO_BE_REPLACED 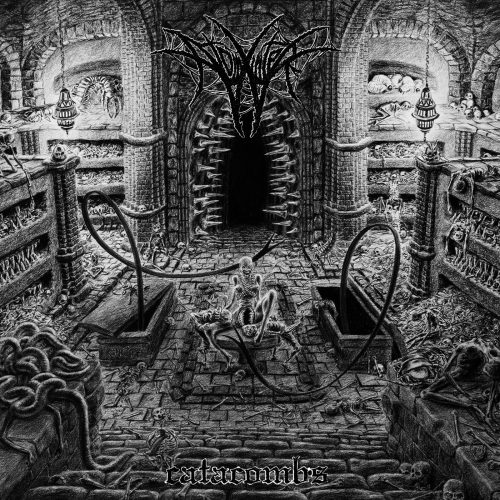 I hope everyone had a good Christmas Day, even if the day itself is nothing special to you. As you may have seen, NCS was alive and kicking despite the holiday, with three premieres yesterday. And we’ll continue to kick for the rest of the week with a rollout of more year-end lists by NCS contributors and invited guests, plus assorted other posts.

I wasn’t able to get a SHADES OF BLACK post done for Sunday, but it’s coming soon… and may be a two-parter, because there’s a lot I want to write about. But to start the six days that remain before New Year’s Eve, I selected three recent songs and one new EP that sound like the antithesis of peace on earth, good will toward men, because I can only take so many demonstrably impotent platitudes of that nature before I have to dose myself with flesh-eating music.

The consumption of flesh commences with a track from Catacombs, the new third album by the German harbingers of total death in Atomwinter. The album will be released by Trollzorn on February 9 (digital, CD, and gatefold LP). And isn’t that a hellishly fantastic album cover? END_OF_DOCUMENT_TOKEN_TO_BE_REPLACED