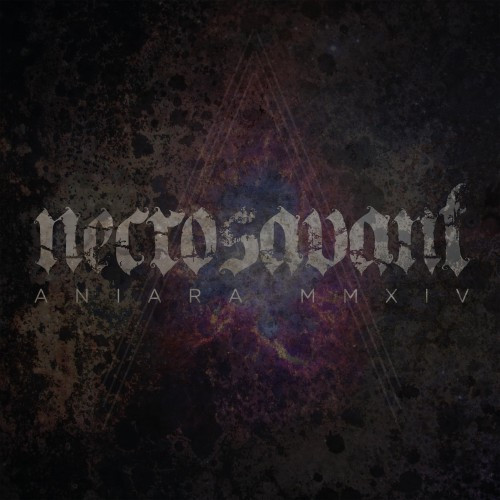 (We’re late reviewing the very impressive debut album of Necrosavant, but DGR does his best to make up for the delay with this extensive review.)

Sometimes reviews start out as entirely different beasts from the ones that are eventually published. You close your eyes and start typing — in my case usually to discover that your fingers were off to the left by just one letter after about a paragraph — and the next thing you know your opening segment has spent more time talking about other projects that a band might be involved in than the release you were initially focused on. This review has one such lineage, starting out as one for In Mourning, before shifting to October Tide, before finally becoming a review for Necrosavant.

Believe it or not, there actually is a throughline for those three releases. The initially wild and wooly paragraph that opened up this monster would’ve taken you on a journey ’round the world before landing on why those three are tied together somewhat.  Instead, it came down to the fact that although our site posted about the Necrosavant kickstarter way back when it launched, and I personally was on pins and needles hoping to see it succesful (based on a one-minute sample video of guest vocalist Tobias Netzell (In Mourning, Antarktis) delivering a monstrous vocal performance), we actually never got around to talking about the whole album after its end-of-February release through Kolony Records came and went. The time has come. END_OF_DOCUMENT_TOKEN_TO_BE_REPLACED

(DGR steps up for round-up duty, and he prepared a really big round-up, so big that your humble editor decided to divide it into two parts.)

In case you missed it, we here at NCS have a bit of a soft spot for the melo-doom band Enshine and all their related shenanigans. The group recently allowed us to premiere their song “Adrift”, and that song was an awesome teaser of things to come for the group’s upcoming album Singularity. Recently, Enshine uploaded another song to the web in the form of “Resurgence” and boy, in NCS parlance, is it a doozy. END_OF_DOCUMENT_TOKEN_TO_BE_REPLACED

In a nutshell, these five new LVTHN songs are potent examples of bestial black art — torrential hailstorms of knife-edged riffs undergirded by the distant rumble of percussion and pierced by flesh-rending vocals, with waves of dark, dramatic melody moving through the music like the migration of leviathans. It’s gripping, galvanizing, ravaging music, with just enough well-placed breaks in the onslaught to prevent total sensory overload.  And the Katharsis cover is obliterating. END_OF_DOCUMENT_TOKEN_TO_BE_REPLACED