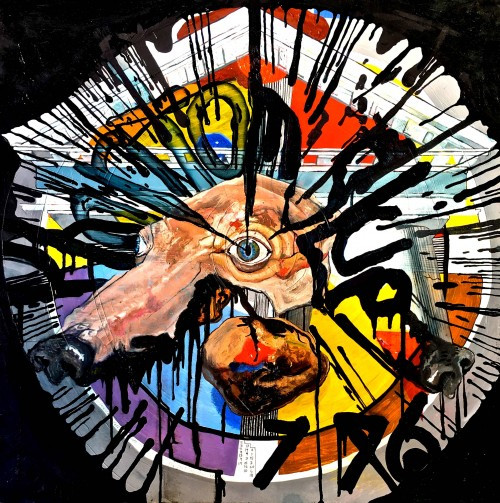 Vocalist and rhythm guitarist Matt Oakes of Boston’s Phantom Glue explains: “Worker-less Mill refers to a building that begins to take on the qualities of a giant living entity. It perceives itself as the messianic offspring of the Sumerian goddess Inanna. More broadly it’s about objects taking on living qualities. And the history of graven imagery and idols.”

If this explanation of the concept behind the song you’re about to hear peaks your interest, there’s more where that came from, because through the course of Phantom Glue’s releases to date, the band have been building a mythological occult history of the Americas (and an apocalyptic future). Their new album is named 776, and it “explores an unwritten history of the United States a millennium before the signing of the Declaration of Independence”.

As a lifelong fan of science fiction and fantasy (including alternate histories), I was immediately intrigued after reading these descriptions of 776, before hearing a single note — and then held my breath waiting to find out if the music would be as interesting. A sigh of relief soon followed. END_OF_DOCUMENT_TOKEN_TO_BE_REPLACED

For me, one of the bright spots of 2015 was the revival of Sweden’s Wombbath and the release of Downfall Rising, the band’s first album since 1993’s classic Internal Caustic Torments (and the source of this killer track that I included in our 2015 Most Infectious Song list). And now Wombbath are starting out 2016 in fine form by participating in a split release with Revel in Flesh called Dragged Into the Obscure — which will be released on April 1 by Unholy Prophecies and features grisly artwork by Juanjo Castellano. END_OF_DOCUMENT_TOKEN_TO_BE_REPLACED