Yes indeed, the Icelandic band Svartidauði, whom I’ve had the great pleasure of seeing live both in Reykjavík and here in the U.S., have a new album coming our way. Entitled Revelations of the Red Sword, it will be released by Ván Records on December 3rd, six years to the day after the advent of their debut album Flesh Cathedral. This morning, along with that announcement, the band provided a stream of a new song called “Burning Worlds of Excrement” — which could double as a headline for the daily news. END_OF_DOCUMENT_TOKEN_TO_BE_REPLACED 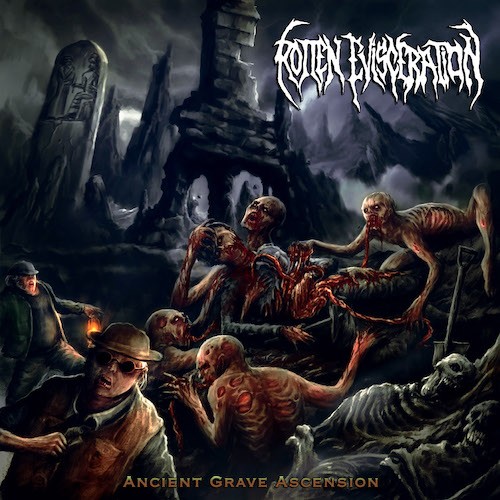 All of the outward trappings of the Perúvian death metal band Rotten Evisceration suggest an experience of depraved, gore-splattered, blunt-force horror — from their name, to the cover art for their debut album Ancient Grave Ascension, to the titles on the album’s track list. All these outward signs might lead some to conclude that their music is entirely devoted to brutal bludgeoning and mindless mayhem, and that’s not far from the truth, but it’s definitely not the whole truth, as you’re about to discover.

It’s our putrid pleasure to announce the details of this release, along with that ghastly cover art: Ancient Grave Ascension will be released by Blood Spattered Axe Records in conjunction with Guts ‘N’ Blood Records on November 1st of this year. And we also have for you the premiere of the breathtakingly destructive but tremendously electrifying title track from the album, delivered through a lyric video that revels in the terrors of the cover art. END_OF_DOCUMENT_TOKEN_TO_BE_REPLACED