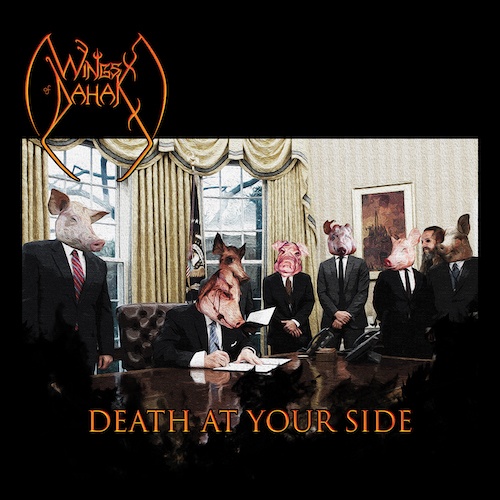 I’ve been closely following the work of Texas-based Wings of Dahak since coming across the tracks released in advance of their 2017 debut album, Unholy Wings. Initially drawn to the music by the pedigrees of the band’s three members — guitarist/vocalist/bassist Dave Tillery (Embalmed, ex-Gruesome Fate), lead guitarist Cody Daniels (Giant of the Mountain, Dour), and drummer Matt Thompson (King Diamond, and more) — I quickly became sold on the ravaging ferocity and immense evocative power of their particular amalgam of death and black metal (to mention only two ingredients).

Named for a legendary three-headed dragon (Azhi Dahaka) created by the spirit of destruction, whose reign brought to the earth “misery, hunger, thirst, old age and death, mourning and lamentation, excessive heat and cold, and intermingling of demons and men,” and creating music “with this spirit in heart and mind”, the band have succeeded in summoning those terrible visions through sound.

Wings of Dahak followed that debut album with a new single last fall — “The Day They Burned” — which we reviewed soon after discovering it. Now, the band are about to release a new EP named Death At Your Side, which includes both that single and two new tracks. Today, on the eve of that release, we’re premiering both the EP as a whole and a video for its title track. Let’s take the songs one at a time, beginning with the one we’re presenting through a frightening video… END_OF_DOCUMENT_TOKEN_TO_BE_REPLACED

Yes indeed, the Icelandic band Svartidauði, whom I’ve had the great pleasure of seeing live both in Reykjavík and here in the U.S., have a new album coming our way. Entitled Revelations of the Red Sword, it will be released by Ván Records on December 3rd, six years to the day after the advent of their debut album Flesh Cathedral. This morning, along with that announcement, the band provided a stream of a new song called “Burning Worlds of Excrement” — which could double as a headline for the daily news. END_OF_DOCUMENT_TOKEN_TO_BE_REPLACED

On September 30th, Via Nocturna released the debut album by the Texas black/doom band Wings of Dahak. In the run-up to the release I wrote twice about individual songs from the album, which together displayed the diversity of the music created by this talented trio — guitarist/vocalist Dave Tillery (Embalmed, Gruesome Fate), lead guitarist Cody Daniels (Giant of the Mountain), and drummer Matt Thompson (King Diamond). Now it’s my pleasure to present the premiere of a new music video for the album’s strikingly powerful title track.

The album is conceptually based on the horrifying tale of Azhi-Dahaka, an unstoppable three-headed dragon “created by the Spirit of Destruction”, who brings ruin to the earth. As the band further explain: END_OF_DOCUMENT_TOKEN_TO_BE_REPLACED

Aldrahn (Björn Dencker Gjerde) is a name of historical significance in the annals of Norwegian black metal through his work during the ’90s in Dødheimsgard and Zyklon-B, as well as his contributions to Thorns and more recently The Deathtrip. Urarv (“Ancient Heritage”) is his most recent endeavor, originally conceived in 2003 during his stay in a mental institution and now finally flowering in thorns through a debut album named Aurum (released on September 17 by Svart Records), in which Aldrahn is joined by bassist Sturt and drummer Trish (whose work in Asagraum I’ve written about previously). END_OF_DOCUMENT_TOKEN_TO_BE_REPLACED

Today we got some additional information about the new album by Satyricon. As previously reported, it is entitled Deep Calleth Upon Deep and will be released by Napalm Records on September 22. The cover art is an obscure 1898 drawing by the famous Norwegian artist Edvard Munch. The album has been described by the label as “a wholesale reinvention and a brand new era in SATYRICON history”. And with that titillating pronouncement we also have this statement by frontman Satyr: END_OF_DOCUMENT_TOKEN_TO_BE_REPLACED