Aldrahn (Björn Dencker Gjerde) is a name of historical significance in the annals of Norwegian black metal through his work during the ’90s in Dødheimsgard and Zyklon-B, as well as his contributions to Thorns and more recently The Deathtrip. Urarv (“Ancient Heritage”) is his most recent endeavor, originally conceived in 2003 during his stay in a mental institution and now finally flowering in thorns through a debut album named Aurum (released on September 17 by Svart Records), in which Aldrahn is joined by bassist Sturt and drummer Trish (whose work in Asagraum I’ve written about previously). 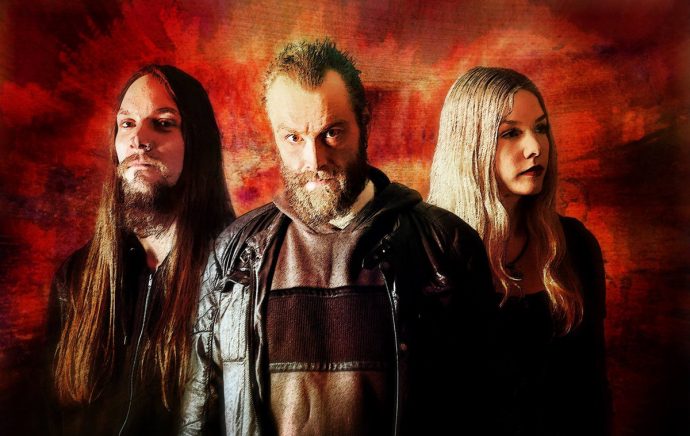 Aldrahn has explained his goals for Urarv in this way (though I recommend you also read his recent interview at Invisible Oranges, which goes deeper into Urarv and far beyond it as well):

“We want to tap into uncharted territories to see what lies hidden under the rocks and dead horses and beneath the cold vastness of uncertainty. We’re traveling to remote regions of metal music and mental space with this music. Although our message is one of emotional putrefaction, we want to help listeners find a way through the black hole.”

Urarv’s resistance to convention is a big part of the album’s appeal, at least for those of us who hunger for intriguing new tastes no matter how much we might still hunger for the familiarity of comfort food. But, to be clear, as I hear it, this music isn’t deliberately putting a thumb in the eye of convention. It’s just that conventions and expectations haven’t circumscribed the inventive impulses and ideas that led to these creations.

Let’s take the final track, “The Red Circle“, as an example. Aldrahn’s voice is a magnetic presence, a scalding fury matched by the torrents of blasting drums and the swirling tornado of shimmering guitar intensity and vibrant, mercurial bass behind it.  However, the song also bounds and lopes; pulsating chords exert a grim hypnotic force; Aldrahn’s voice morphs into different shapes but never loses its shattering intensity; and in the final minute and a half, the music transforms into a ghostly mist.

(Thanks to Miloš for urging me to listen to Aurum.) 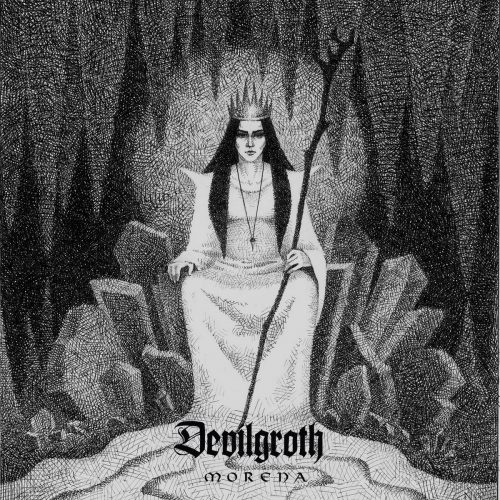 Like Urarv, the origins of the Siberian black metal band Devilgroth are connected to a mental institution, the “Orlovka” facility in Voronezh, which housed the band’s original vocalist and lyricist Sleyd. He separated from the group after their 2014 album Altar, and the band is now a duo consisting of Aarsland (voсals, guitars, bass) and Celestial (drums). Their new full-length, Morena, was released on August 27 by the Kazakhstan label Red Truth Records.

I don’t remember encountering Devilgroth before Conor O. urged me to listen to Morena but this album has floored me.

At the outset I said I would focus on only one track from each of the full releases included here, but in this case you should listen to the introductory track before diving into the one I picked, which follows it, in part because of the sharpness of the contrast. When you do come to “Nav’“, you’ll soon be enveloped in an immense storm of dramatic sound whose deep grinding riffs and thunderous drumming are pierced by fire-breathing vocals and brain-spearing leads.

The music becomes no less dramatic, and the pinging leads no less penetrating and alluring, as the pace slows. Further rhythmic changes lie ahead, along with a panoply of dark, powerful riffs. There is an ominous, staggering grandeur about the music, and a high level of riveting intensity in the music’s jarring rhythms, terrifying vocals, and cold, cruel chords.

The entire album proves to be a revelation. Don’t stop with “Nav’“. 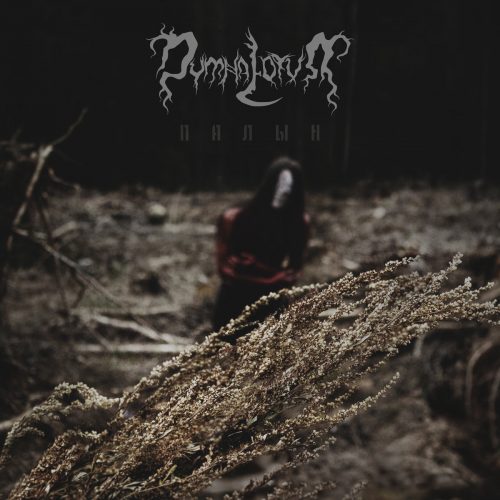 Dymna Lotva make their home in Minsk, Belarus. They released a first album last year and followed it this past August with an EP named Палын (Wormwood, in English) which takes the Chernobyl nuclear plant disaster as its subject matter. The band characterize their music as an intersection of doom metal, post-black metal, and depressive black metal, “inspired by real stories of grief”. The lyrics are in Belarusian, but translations are available on Bandcamp.

Dymna Lotva have set the album’s Bandcamp stream to launch with the title track, though it appears fourth in the running order. That was a good decision, because the song is tremendous (though you really wouldn’t go wrong if you chose to begin anywhere else).

The song intertwines the urgent, pulsating surge of the guitar and drums with the slow, weeping sound of a violin… and then the surge subsides, the drum beat becoming solemn, tortured shrieks replaced by growling whispers, the strings deepening the atmosphere of bereavement. When the power rises again, flickering guitar notes appear. Another subsidence comes and a cold alabaster beauty gleams from the sound. The violin tugs hard on the heart-strings.

In a previous edition of this column on the first day of August, I wrote about the first excerpt from the debut album of this Texas trio, which consists of guitarist/vocalist Dave Tillery (Embalmed, Gruesome Fate), lead guitarist Cody Daniels (Giant of the Mountain), and drummer Matt Thompson (King Diamond). That debut album, Unholy Wings, will be released on September 30 by Via Nocturna.

Wings of Dahak have now released a lyric video for a second advance track, this one named “Moment of Release“. They describe it as “the fastest and shortest song on the album, distinctly different from the primary blackish doom feel the album exudes throughout”.

The track’s velocity and intensity reflect the events in the part of the album’s conceptual story-line described in this song, which captures “the moment in time that the great evil, Azhi-Dahak, summoned by the greed and dishonor of man, escapes the confinement of unworldly chains and mountainous earth, and spews forth massive destruction across the land in the blink of an eye”.

There is indeed a strong feeling of ravaging ferocity in the music and the vocals, together with images of a fearsome power rising from its keep. The sound is immense… and the guitar solo in the song is breathtaking. 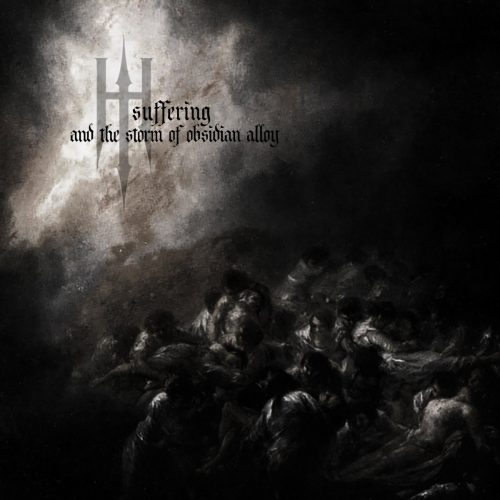 The extensive releases of this New Jersey solo project (whose creator calls himself Heretic Prime) have ranged (in his description) from gothic industrial music to aggrotech and EBM to atmospheric metal and electro-industrial sounds. The latest EP, Suffering, and the Storm of Obsidian Alloy, explores a particular approach to merging the creator’s favored elements of black metal and EBM. It was released on September 10.

“Of Intoxicating Agony” begins the album. It is indeed a representation of agony, and it is indeed intoxicating. The symphonic keyboard melody that soars above the black heaviness of the heaving riffs and deep bass thrum manages to be both despairing and mythic, raising pain and the catastrophe of terrible loss into beacons in the heavens. The vocals are incinerating.

(Thanks again to Miloš for linking me to this release.)

Andavald is unusually obscure, even by the standards of obscurity that often apply to the bands whose music I select for these columns. They have no releases, no presence on the web, and seem to have said nothing about their work that I’ve been able to find, nor have I been able to identify the members’ identities. They’re based in Iceland, which seems to have more black (and black-ish) metal bands per capita than any other nation on earth — but most of them are so good that when I hear about a new one I always feel a compulsion to investigate.

Andavald haven’t released anything yet, but Nordic Underground did capture their performance of two songs at the Norðanpaunk festival in Iceland last month. I learned of the videos thanks to a message from starkweather, who described the music as “quasi melodic, icy dissonant, mid-tempo to slow black metal” with a “twin vocal attack”, almost with “a post/shoegaze quality in terms of how they are stacking the guitarwork” and featuring a “simple, steady drum style closer to classic Black Sabbath than any classic black metal”.

The two songs in the videos are “Hugklofnun” and “Afvegaleiðsla“. There’s a depressive quality to the haze of guitar melody and shimmering leads in “Hugklofnun”, and the repeating drum and bass patterns lock in like manacles. The combined effect, notwithstanding the skin-splitting intensity of the vocal tandem, is spellbinding. You become lost in a dimension of despair.

Andavald make use of similar techniques in “Afvegaleiðsla“, with a similarly sorcerous and soul-slaughtering effect, though it also includes a simple, repeating sequence of melodic notes that’s almost bright (and certainly very memorable).

Surely we won’t have to wait long before Andavald (or some astute label) make their music available in a form other than these videos. Please? 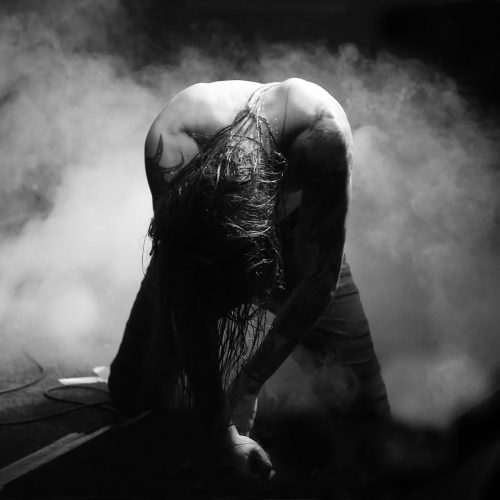 To close, I have a new video for a new Bandcamp single called “Pestilence Shall Come” by the six-piece Australian band Advent Sorrow. Andy Synn reviewed their last album for us — 2015’s  As All Light Leaves Her — and I picked a song from that album for our 2015 list of Most Infectious Extreme Metal Songs.

Compared to their previous releases, Andy wrote, the last album saw the band “shedding the symphonic grandeur that permeated their debut EP in favour of an all-round darker and more desperate form of borderline DSBM-style sonic despair”. Advent Sorrow themselves describe their music as “torturous black metal”, “the sound of hopelessness and violence”, “the soundscape of a soul carved of fear and isolation, the product of a life devoid of nurture”.

I intentionally placed this song after the Ironhand and Andavald tracks, because I thought it made for a good complement to those, even though the sound is different. “Pestilence Shall Come” is remarkably intense, from the searing pain in the vocals and the wash of desolation in the chords that swirl about them to the staggering force of the drums when operating at speed (though the drum rhythm is just as often simple and deliberate). And… there is also a soaring symphonic grandeur to the song that only magnifies its emotional power.