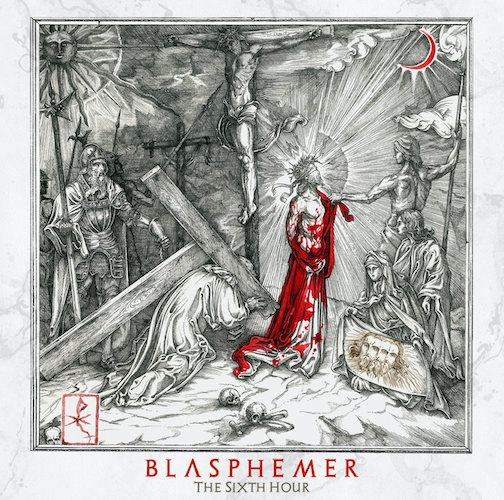 (This is Vonlughlio’s review of the latest album by Italy’s Blasphemer.)

This time around I have the opportunity to do a small write-up about the Italian band Blasphemer’s third album, The Sixth Hour, which was released on January 24th via Candlelight Records.

This project was given birth in 1998 by Simone Brigo (Guitars) and Paolo Maniezzo (vocalist up to 2017) with the intention to express their artistic vision, and their thoughts and views of organized religion, hate, and death, in a Brutal Death Metal setting. 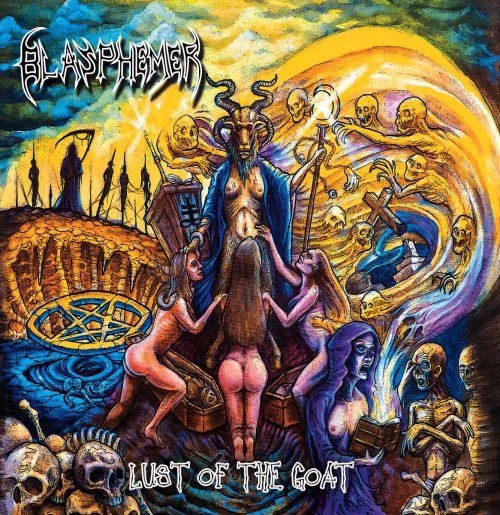 The British band Blasphemer, whose roots go back to 1990, returned to the field of battle with a self-titled album in 2017 after a 20-year gap in their musical output. The story of what happened to the band after their auspicious beginnings is recounted in this NCS interview. Fortunately, as that interview foretold, Blasphemer have let much less time pass between releases since then, with a second album now due for release by Grind Scene Records on November 30th.

While last year’s self-titled album was a roughly 50/50 mix of old Blasphemer compositions and new ones, Lust of the Goat brings eight newly-written tracks, one of which (“Child Catcher”) debuted last month, and we’re bringing you another one today. This new track, which closes the album, is “Nazarene“. END_OF_DOCUMENT_TOKEN_TO_BE_REPLACED

Yes indeed, the Icelandic band Svartidauði, whom I’ve had the great pleasure of seeing live both in Reykjavík and here in the U.S., have a new album coming our way. Entitled Revelations of the Red Sword, it will be released by Ván Records on December 3rd, six years to the day after the advent of their debut album Flesh Cathedral. This morning, along with that announcement, the band provided a stream of a new song called “Burning Worlds of Excrement” — which could double as a headline for the daily news. END_OF_DOCUMENT_TOKEN_TO_BE_REPLACED 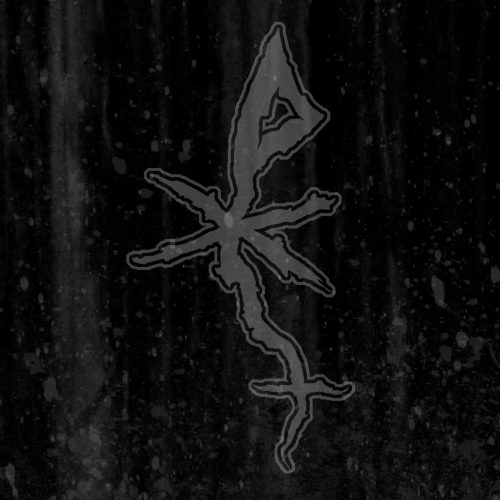 Originally formed in 1998, the Italian brutal death metal band Blasphemer have released two albums so far — On the Inexistence of God in 2008, and 2016’s Ritual Theophagy, which we premiered and reviewed here last October. That last album left an especially deep mark, delivering a full-bore blaze from the beginning right up to the final track (which takes a different turn) — an utterly ferocious, unrelentingly savage, mercilessly brutal onslaught, and also an eye-popping, jaw-dropping exhibition of technical fireworks.

Since that album, Blasphemer’s line-up has undergone some change, with original guitarist and backing vocalist Simone Brigo (also a member of Beheaded) and bassist/vocalist Claudio “Clod The Ripper” De Rosa joined by guitarist and backing vocalist Nicolò Brambilla (Ekpyrosis) and drummer Davide Cazziol (Helion, Mortui Corpus). They’ve recorded a new promo single which is available today as a free download at Bandcamp, and we’re helping spread the word. The track’s name ie “Jesus Is Stripped of His Garments“. END_OF_DOCUMENT_TOKEN_TO_BE_REPLACED 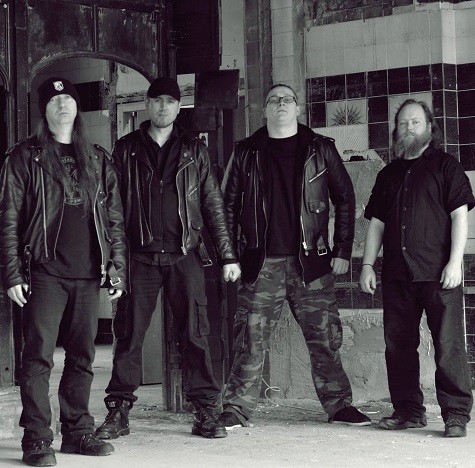 (KevinP brings us another episode in his series of brief interviews, and this time he quizzes guitarist/vocalist Arno Cagna and drummer Dan Mullins of the UK’s Blasphemer, whose self-titled debut album was released in January of this year.)

So you’ve been around 25 years (since 1992) and you just finally got around to releasing your debut album.  Amuse us with the explanation why it took that long?

Arno:  The band actually formed in 1990.  Our first demo was released at the end of 1992.  From 1992 to 1995 we released several demos and received positive press in the fanzines of the day.  That led on to us receiving 5/5 demo reviews in Terrorizer magazine in the UK in 1994 and then being voted best unsigned band by their readers. So you would have thought our first album would have been released in the 1990s. It wasn’t to be though, as around 1995 the project as Blasphemer was put hold. This was due to an unreleased demo that fell into the hands of a record label. END_OF_DOCUMENT_TOKEN_TO_BE_REPLACED 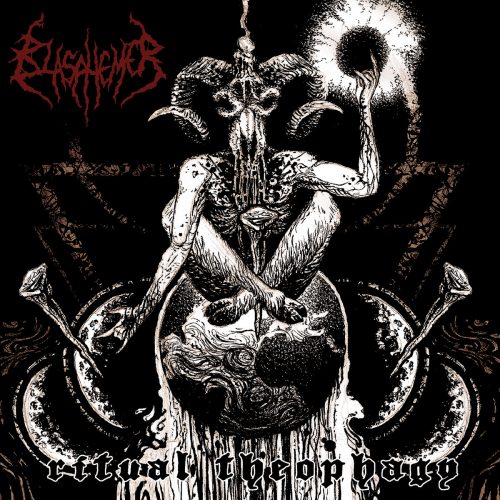 Ritual Theophagy is the second album by Blasphemer, a death metal band from Muggiò in the Lombardy region of northern Italy. It follows by eight years the band’s first album, On the Inexistence of God, and a 2010 EP named Devouring Deception that we praised in a review (here). Ritual Theophagy is already available through the band and Comatose Music, but we’re now bringing you a full public stream of the album for the first time.

Blasphemer throw 11 songs at you in the space of about 28 minutes, with only one of the songs reaching the three-minute mark. And from that, even if you’re unfamiliar with Blasphemer‘s take-no-prisoners approach to death metal, you might deduce that Blasphemer traffic in speed… and you would be right. END_OF_DOCUMENT_TOKEN_TO_BE_REPLACED 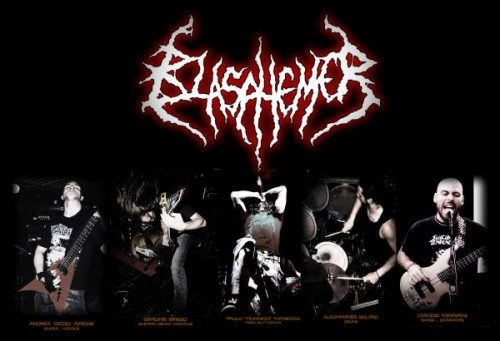 Blasphemer is a 5-piece band from Milan, Italy. The band came into existence in 1998, but because of years of “drinking and fucking around” (their words), they didn’t buckle down and release a full-length album until 2008’s On the Inexistence of God (which was produced by Stefano Morabito at 16th Cellar Studio, who has done similar work for Hour of Penance and Fleshgod Apocalypse). They’ve also now recently released a 5-song EP on Comatose Music called Devouring Deception that includes a remastered version of a previously released single (“Cloaca of Iniquity”), a cover of a song by Broken Hope (“I Am God”), and three new original songs.

Principally on the evidence of the 2008 LP, Blasphemer seems to get categorized with bands like Severed Savior, Deeds of Flesh, and Defeated Sanity under the banner of Brutal Death Metal. The Marco Hasmann cover art of the EP (which you’ll see after the jump) points in that same direction — a winged monstrosity admiring his handiwork after eviscerating a voluptuously nude angel.

Some brutal-death aficionados might continue to classify the EP under that banner, but we hear something a little different. Yes, the music is like a horde of army ants cascading through your brain with pincers snapping voraciously — but with choreography. The sound as we hear it is a bit closer to Fleshgod Apocalypse than likes of Deeds of Flesh usually deliver, and as most of you long-time readers know, that’s high praise here at NCS.  (more after the jump, including a Blasphemer song . . .) END_OF_DOCUMENT_TOKEN_TO_BE_REPLACED