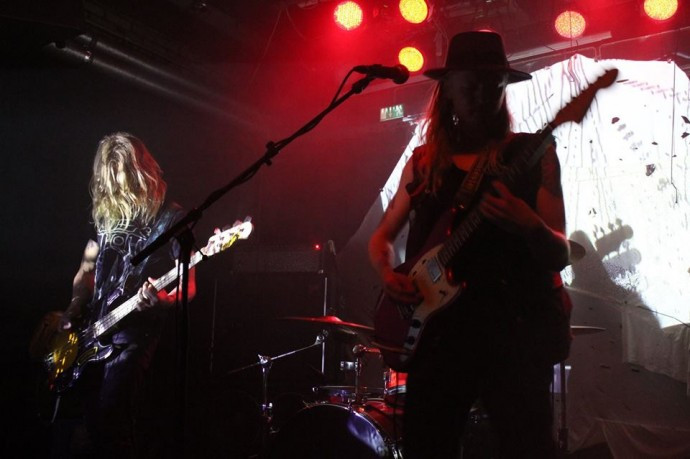 (Comrade Aleks rejoins us with an interview of members of the Finnish band Tombstoned, whose new album II is set for release by Svart Records on April 22.)

I was lucky enough to get promo of new Tombstoned album II, which turned out to be a pleasant surprise as I had never heard about them before. Born in 2010, this doom metal outfit (some may add “psychedelic” to this definition) already had an EP Searching/ Let Go (2012) and a self-titled full-length record (2013). The band acts in the form of a power-trio, with Olavi on bass, Jussi on guitars and vocals, and Akke as the drummer.

Their classic doom metal shapes really have psychedelic nuances and a few recognizable features of ‘70s rock music, taking into account that all the instrumental parts are extremely catchy (taste “Pretending to Live” or “Haven’t We Seen All This Before” and you’ll have a general view what Tombstoned are about). Oh, one more thing – good news for those who secretly love The Cure, because sometimes the intonations of Jussi’s vocal parts remind me of Robert James Smith, and that sounds cool!

Enough talk from me! Let’s give space to Jussi and Olavi to tell us how to get Tombstoned. END_OF_DOCUMENT_TOKEN_TO_BE_REPLACED

Interestingly, although winning Wacken Metal Battle gave Hamferð the option for a label contract with Nuclear Blast, they turned it down “to be able to continue their work without unwanted influences”. END_OF_DOCUMENT_TOKEN_TO_BE_REPLACED