The first band that I happily came across while recently perusing the net is Plasmoptysis. I had never heard of these guys until today but boy, what the hell have I been missing. Their stuff is great, like a mix of old school Bay Area Thrash mixed in with good ole American Death Metal. Interestingly enough, they’re from Indonesia.

A lot of critical metal fans will be a bit disappointed and yes, while I may agree it sounds a bit cliche in a genre that’s going into its 30’s, you’d be hard pressed to find many groups in ANY genre without similarities to their peers. These guys pull it off well, and execute massive pounding upon your skull that will scramble your brain. This is the stuff you listen to when you workout, or for the nerds out there who play Halo, CoD or Gears of War.

This next group is categorized as Mathcore/Hardcore, which will have many metal fans rolling their eyes. I know it’s a craze right now in the scene, but goddamnit! there are good deathcore bands out there. Forget the word core. I wish I could erase it from this genre, so people would stop trolling and flaming each other and bands (some of them) who don’t deserve it.

However you feel about this mostly misunderstood sub-genre, Car Bomb hails from this side of the sea in Long Island, NY and serves a mash of different styles with strange time signatures and a lot of tempo changes (ala Meshuggah and Ion Dissonance). Their band name instantly makes me think of Irish Car Bombs, and, oddly enough, if you listen to their album Centralia from start to finish, it will make you feel like you’ve had 10 of them. 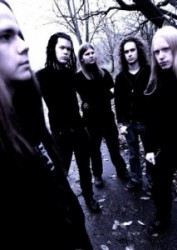 Canopy is a group from my make-believe home-away-from-home (also the birthplace of Opeth), Stockholm, Sweden. Listed on many blogs as one of the top metal releases of 2010, their newest album Menhir is anything but the typical melodeath that I love and crave so much.

The album begins with a gentle acoustic introduction that will lull you into a trance. About a minute and a half or so into the intro, it explodes into a melody of heaviness — a lot of the same sound as we’re accustomed to with bands of this nature, but then, what’s this? Another minute into the song it explodes even more, exposing the hardened guts of what this band is all about: Blending dark, heavy, melancholy sound with a sort of twisted beauty. I saved the best for last! This little gem is a blast from the past. Yeah, The God That Never Was came out in 2006. So what? Wanna fight about it? Anyway, Dismember comes from, you guessed it, SWEDEN! Apparently, these guys have been around since 1988. Where the FUCK have I been? Hey, sometimes I miss these things.

Dismember are an awesome treat to fans of old school death. This album definitely sounds like Entombed and Death had sex, but Death totally forgot to wear a condom and they had an illegitimate child, but Death refused to pay child support, so Dismember grew up all angsty and had an Oedipus complex. Interestingly enough, the lead singer is George “Corpse Grinder” Fisher in disguise. (Kidding, but really, no goatee and he could pull it off)

[EDITOR’S NOTE: Long-term readers of NCS will know we’re ardent admirers of Canopy. We can’t take credit for Rob’s discovery of the band — he did that on his own — and we’re damned sure not going to object to a reminder of how good they are.]