Feast your ears on the tunes after the jump. Or, more accurately, allow the music to feast on your ears.

I’ll make an effort to keep the introductory verbiage for each of these bands brief. For background about Xerath and a chance to hear the first song they released not long ago for their next album, check out our earlier post here. The second song debuted yesterday in one of those “exclusive” streams, this one featured by an excellent (and excellently named) metal blog called Gun Shy Assassin.

The song is called “Nuclear Self Eradication”. While it preserves Xerath’s reputation for employing “cinematic symphonic arrangements” in the creation of metal, this song ratchets up the aggression factor with flamethrower guitar solo’s and a blazing pace. This being Xerath, it’s also loaded with groove-heavy start-stop rhythms. Crank up the volume and go for it:

II will be released by Candlelight Records on May 3. 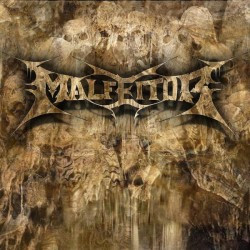 Malfeitor is a Swedish death metal band that first came together in the mid-90’s and recently re-formed and began to create new music. We’ve already featured the first two new songs from Malfeitor’s new work in previous posts (most recently, here), and now we have a third. As long as these dudes continue cranking out music that’s this killer, we will continue to throw their bat-winged offspring your way.

Malfeitor is continuing to work on songs to flesh out a full-length release. We hope they’ll continue this interesting experiment — releasing each new song as it’s finished. We’d get the album when it’s complete anyway! But even if they stop at some point and then unleash the balance when the album is finished, we’re going to enjoy this while it lasts.

So here’s the most recent track. It’s called “Death, the Dead and Me”. It’s just as fucking scary as the first two:

(Just in case this YouTube link doesn’t work properly, here’s the track as it appears on Soundcloud): 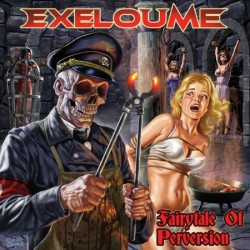 This band from Norway have recently signed a deal with the Swedish label ViciSolum Productions. Their debut album, Fairytale Of Perversion, will be released on Friday, May 13. It was produced by Rune Stavnesli (Keep of Kalessin, Bloodthorn) and mixed/mastered by the multi-talented Dan Swanö, (ex-Edge of Sanity, Bloodbath, Nightingale).

The album will also feature guest appearances by Andy La Rocque (King Diamond), who contributes lead guitar on “Ignorance Is Bliss” and the same Dan Swanö, who contributes additional vocals on “Our Poisonous Creation”. The artwork was created by Ed Repka (Death, Atheist, Megadeth), and as you can see it’s awesome, in a very florid, pulp-fiction kind of way.

I’ve heard three songs from this album so far, and all of them kill.  The music is a mix of thrash and death metal. It’s beautifully played, intricately arranged, and pleasantly unpredictable. Not surprisingly, given the production talent behind this release, it also sounds great. Here’s “Our Poisonous Creation”: 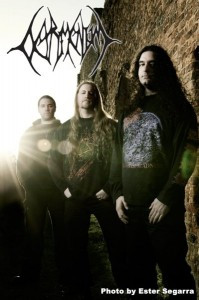 We’ve been fans of this band since 2009, when they released their album Embracing the Deformity. Since then, line-up changes have ensued, with original members Jon Butlin and Paul Wilkinson carrying forward, joined on drums by the jaw-dropping Steve Powell ( who plays with Anaal Nathrakh in live performances, among other bands).

Detrimentum has just today released a third song from the album called “Mine Is the Glory . . .”. Like the first two, it’s a riveting listen — a dark, hard-charging, rhythmically dynamic cross-breeding of death- and black metal. The instrumental work continues to be top-shelf, as does the song construction.

Malfeitor and Detrimentum are both unsigned at the moment, and both are looking for label support. In due course, unless we miss our guess, some perceptive, enterprising souls are going to jump at the chance to sign these bands, because both of them definitely gots the goods. Remember, you heard ’em first here.

P.S. Fuck me, I just discovered that Detrimentum put up yet another new song for streaming. I won’t delay this post further with any kind of description. Here it is:

6 Responses to “A TETRAHEDRON FOR THURSDAY”