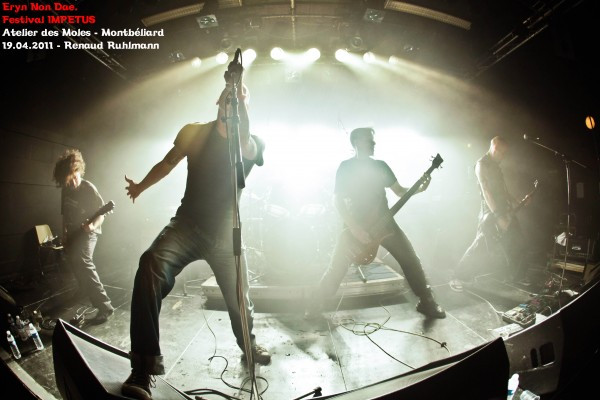 Sorry to be so rude in my choice of words. I blame the music I’m about to play for you. Let me try that again:

It’s time for you to shake off the somnalent after-effects of your Saturday-night slumbers and become fully alert. Is that better?

So, maybe you really aren’t ready to wake up and would prefer to remain dozy and slothlike for a while longer. If so, do not watch the videos I have collected to begin this sleepy Sunday. The music will not allow you to remain soporific. Or somnalent. Or slothlike. Or other words beginning with S.

For our five-alarm music today, we have an offering of new and old music videos. First up is a new performance video from a French band of which we are big fans here at NCS — Eryn Non Dae. After that, an evil song from Black Hole Generator (Norway), with an official video that’s almost as disturbing as the music. Then, two more new videos — one from Egyptian-born Nader Sadek and the other from The Generals (Sweden). And finally, I’ve got a new song from a UK band called The Soulless (formerly Ignominious Incarceration). The styles of metal are diverse, but all this music will whomp you in the noggin.

If you’re not awake and banging your fucken head after hearing all these songs, then, as a trained medical professional, I believe I can clinically classify you as comatose.

Last year, we published no fewer than four posts about this band from Toulouse, France. Those posts included a review of the band’s 2009 Metal Blade release, Hydra Lernaïa, an interview with the band, and two updates that included videos of live performances. The last post about them in 2010 includes links to all the others. We also posted an update in March of this year, reporting that the band were at work on their next album, with plans to record it in August. We’ve paid lots of attention to END. because the music they make is such a head-scrambling rush of envelope-pushing metal.

In April, END. played at the Impetus Festival in Montbéliard in eastern France. Late last week, the band released a pro shot video from that performance, featuring a song from Hydra Lernaïa called “Blistering Hate”. It’s blistering. See for yourself: 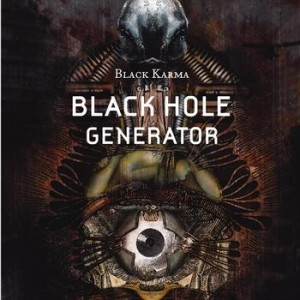 About a week ago, we published a post about a Norwegian band called The Konsortium, whose members are largely anonymous. On Friday, we got a comment on that post from a reader going by the name RagE, as follows:  “Great find! Reminds me of Black Hole Generator.” Well, I hadn’t heard of Black Hole Generator, but impetuous creature that I am, I quickly went to YouTube and found a video of a song called “Black Karma”.

Why did I do that? First, because I like what I’ve heard from The Konsortium, and RagE was comparing Black Hole Generator to them. Second, it’s just a cool fucking name, isn’t it? BLACK HOLE GENERATOR!! (with caps lock). With a name like that, I figured the music just had to be good.

It turns out that Black Hole Generator is from Bergen, Norway and includes only two permanent members — Bjørnar E. Nilsen (Vulture Industries) and Dreggen (Deathcon, Aeternus, touring member of Taake). When they perform live, they fill out with a touring line-up that includes current and former members of well-known bands such as Immortal, Gorgoroth, Enslaved, and Sulphur.

As far as I can tell, the band has only released a single EP, called Black Karma, in 2006. They still seem to be active, but that’s a long time without a new release of some kind. In any event, what I found on YouTube was an official video from the title track to that EP. The song drives ice picks right through your skull. The guitars vibrate in a tremolo swarm, or moan with grim melody; the bass jackhammers a quasi-industrial rhythm; the drums pulse in a cascade of blast beats; and the vocals are shrill and disturbed.

And the video flickers and pulses in sync with the music, flashing a multitude of disturbing images. Persons prone to epileptic seizures should not watch this.

Black Hole Generator’s MySpace page is at this location. 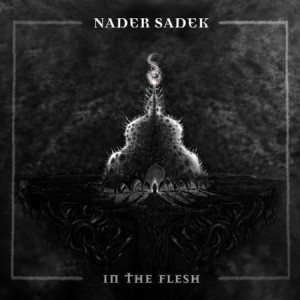 Nader Sadek is an Egyptian-born visual artist (not a musician) who has worked with metal bands in the past. Last week he released a debut album of his own called In the Flesh on Season of Mist. This event grabbed my attention for two reasons — first, because it’s a rare example in metal where the composer and the musicians are largely separated, and second, because of the identities of Sadek’s collaborators on the album: former Morbid Angel vocalist Steve Tucker, Mayhem guitarist Rune “Blasphemer” Eriksen, and Cryptopsy drummer Flo Mounier.

But that’s not all. Both Csihar and Travis Ryan (Cattle Decapitation) contribute vocals to the record, and guitar solos are provided by Thor Myhren (Morbid Angel), Mike Lerner (Behold…the Arctopus), and Tony Norman (formerly of Monstrosity).

Sadek says that he wrote about 30% of the music (principally the melodies), despite his absence of musical training, and worked with Rune Eriksen on the arrangements. He wrote one song entirely by himself — “Nigredo in Necromance”. Sadek created the album as the soundtrack for a series of related music videos — ultimately, one for each track on the album. So far, he has completed two and is now working on a third.

What I’ve got for you is the second video, for the song “Sulffer”. It features a character played by vocalist Steve Tucker, “waist-deep in the primordial waters of creation.” In Sadek’s words, “Stalactites hang from the ceiling of the cave like slow-drip syringes. Flashes of yellow crystal embedded in the rock walls suggest a fool’s gold, sulphur. A byproduct of the petroleum-refinement plants heard in the opening 20 seconds of the video, down the processing chain sulphur makes its way into food and pharmaceuticals as a preservative. The effort to preserve life through a petroleum byproduct points to the central paradox of my In The Flesh concept album: the resurrection of dead matter through petroleum extraction, a resurrection that fuels new cycles of death and decay (for is not sulphur a key component of gunpowder?).”

Visual symbolism aside, I really like the song. Check it out:

You can catch the first video for the album, for the song “Nigredo in Necromane”, plus an interesting interview with Sadek, at this place. 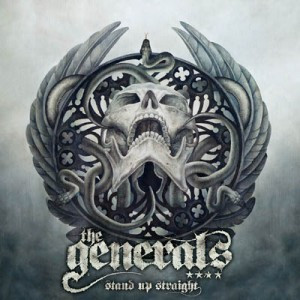 This Swedish band came together in 2002, recorded a demo, and then released a debut album last year on Metalcentral Records called Stand Up Straight, which is what my mother used to tell me constantly. The album was recorded at the famed Sunlight Studios by Tomas Skogsberg (Entombed, The Hellacopters, Dismember). Skogsberg has been quoted as saying that The Generals’ demo, which convinced him to record the album, was the best by a Swedish band since Wolverine Blues.

That was pretty much all I needed to see — that, and the fact that The Generals play “death ‘n’ roll”, which is a style of death metal I’m pretty fuckin’ fond of. So, I watched the new video released by the band last week for a song called “One Eye Red”. It sounds like a cross-breeding of Entombed and Motorhead, and it doesn’t take long to trigger the headbang reflex. My only complaint is that I’d like it to be about two minutes longer; my bobbing head wanted more of that thumping, downtuned riffage. Go for it: 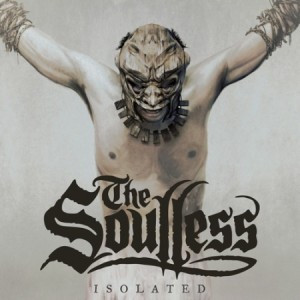 This UK band used to be called Ignominious Incarceration. Under that name, they put out an EP (Deeds of Days Long Gone) and a 2009 album debut on Earache Records called Of Winter Born, which I thought was quite good — a satisfying mix of gut-crunching melodic death metal with a technical flair.

Then, in September 2010 the band announced it was changing its name to The Soulless, commenting that it would be easier to say and easier to remember than Ignominious Incarceration. Hey, I can’t argue with them there. But, in retrospect, the band may be wishing they’d stuck with their original name.

They were scheduled to release their new album (Isolated) on May 16 in Europe and on June 7 in North America, when Earache Records was served with a demand to discontinue all promotion and marketing of the album because the band’s new name infringed on the name of a long-running, Ohio-based death/thrash band called — wait for it — Soulless.

Maybe the UK band and Earache thought that putting a “The” in front of Soulless would make it seem totally different from the name of the Ohio band. Good luck with that dudes.

Regardless of how that name dispute works out, the music of THE Soulless sounds pretty damned good to my ears. Last week the band released the first song from the new album. It’s called “Clones”, and you might want to hear it now in case some court orders the band and Earache to eliminate from the web everything that bears the name “The Soulless”:

That’s all I’ve got. Feeling awake and alert now? Or do you feel like just going back to sleep. Well, either way, enjoy the rest of your fucking day as best you can.