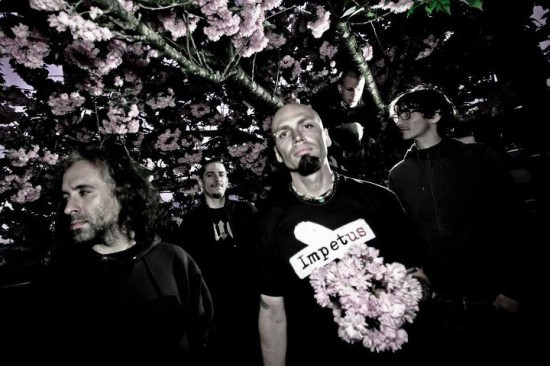 Here’s the second part of a post I started earlier today featuring a divergent assortment of new music and videos I heard and saw over the weekend. In Part 2, I’ve got a new song (and video) from Eryn Non Dae. (France), a recent live video from Iskald (Norway), and a new song from Dischordia (U.S.-Oklahoma).

In 2010, we published no fewer than four posts about this band from Toulouse, France. Those posts included a review of the band’s 2009 album Hydra Lernaïa, an interview with the band, and two updates that included videos of live performances. The last post, from June 2010, includes links to all the others. And then we’ve posted about them twice this year (here) and (here). Do you think we’re overdoing it? Obviously, I don’t think so. I think they’re worth all the attention, and then some. They’re one of the growing number of bands from France who have put that country on the worldwide map of great current metal.

The cause for today’s attention is a new song (yippee!) from a new album (ki-yay-motherfucker!) that’s in the works and planned for release next year. The song is called “Scarlet Rising”, and the band was caught on film performing it at the Impetus festival in Montbéliard, France this past April. (more after the jump . . .)

It appears the video clip will be included on a DVD of the festival, and both the sound and video quality are pro-level. The new song is a scalding, harrowing, acid-drenched crusher that’s tightly executed by END. on stage. WANT MOAR.

Iskald is a band I discovered through one of Andy Synn’s SYNN REPORTS on this site (here). Over the weekend I caught a live performance video of the band performing “A Breath of Apocalypse” in Graz, Austria at the Explosiv! festival this past summer. The sound quality is good, and although the video is darker than I’d wish for, it’s also decent.

The song is way more than decent. It’s from the band’s 2008 album, Revelations of Reckoning Day. It’s loaded with power and groove, rhythmically diverse, apocalyptic in tone, and featuring a cool bass-led interlude. Very nice, non-traditional black metal. Check it out:

Over the weekend, Oklahoma City’s Dischordia had a release show for their debut EP, Creator, Destroyer. Coincident with that, they also released a new song (“Dark Passenger”) for streaming on YouTube, and that’s the last stop on this Monday rollercoaster ride.

This is the only song from Dischordia I’ve yet heard, but it sure as hell did grab my attention. It’s a flamethrower gout of death metal, mixing hefty slabs of brutality with plenty of instrumental flash. I got a particular kick out of the drum barrage and the two guitar solos, but the whole song is satisfyingly punishing.

Another song from the album, the title track, was released previously, and I’m about to give that a shot, too. It can be heard here.