We originally featured this unsigned Melbourne, Australia band with the mouthful of a name back in March 2010, focusing on a 2007 demo called The Aurora Veil. We checked in with them again in October, having learned that they had completed their debut album, Portal of I — a 7-track behemoth with a total run-time of more than 1 hour 11 minutes. In October, the band also released one of the new songs for streaming — “And Plague Flowers the Kaleidoscope” — which fuckin’ floored me. It’s a long, but remarkably multi-faceted piece of music.

We heard from the band yesterday with a bit of news. As reported on their Facebook page, the band has parted ways with their drummer, Dan Presland, who was involved in recording both the Aurora Veil demo and the forthcoming Portal Of I album. The band is already rehearsing with a new drummer, and we hope the loss of Presland (who’s quite good — he won the Australian finals of the World’s Fastest Drummer competition) won’t be a setback. At least it won’t delay the release of the album, since that’s already finished.

In an offsetting bit of good news, the band’s lead guitarist Benjamin Baret has been allowed to return to Australia after protracted wrangling over obtaining a visa. Baret lives in France, and his imminent return to Australia on Thursday of this week appears to be the prelude to release of Portal of I and touring in support of it. The band is still in discussions with labels, and so we’re not yet able to provide a specific release date — but you can be sure we will as soon as that’s set.

So, why are we spending time with this bit of news? Go past the jump and listen to “And Plague Flowers the Kaleidoscope” and you’ll understand (or be reminded, if you’ve heard it before). It’s not like anything else I’ve heard this year — and it makes me so damned curious to hear the rest of the new songs when the album drops next year. Also after the jump, a scorching new track from Devolved . . .

As you can see from this player, Ne Obliviscaris now has a Bandcamp page, and of course you can keep tabs on their doings at Facebook. 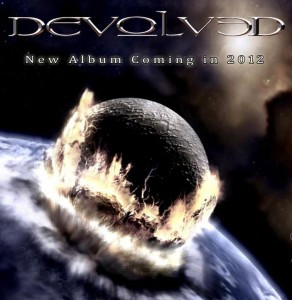 Devolved is another band we’ve been following for about the last two years at NCS. They started in Australia but relocated to Los Angeles in 2005. So, they’re from “down under” today only in the sense that Los Angeles is below . . . uh . . . where I live in Seattle. Devolved are now recording a new album, projected for release in 2012.

Since Devolved released their 2011 album Oblivion on Unique Leader (reviewed at NCS here), they’ve had yet another change in vocalists. The new guy is Mark Haggblad, and as you’ll hear in a minute, he sounds great for this band’s style of music. The band also have a new guitarist in Florida-based Mark Hawkins (Robots Pulling Levers). He also sounds great.

Come to think of it, it appears that drummer and band co-founder John Sankey (ex-Divine Heresy) is the only original member left. Fortunately, he has been the driving force behind Devolved for a long time, and he is primarily responsible for writing all the music, lyrics, and arrangements on the new album. Also, he sounds great, too.

How do I know this? Because Devolved have released a demo version of one of the new tracks called “Collateral Damage”. The new song is a fiery blast of jolting riffage, weaponized drumming, and distorted, hair-singeing vocals. It retains some of the band’s industrial influences, but it’s primarily a high-voltage charge of tech-death that will get your blood pumping. It’s the first song on the ReverbNation player below.  For more on Devolved, here is the link for their Facebook page.

One Response to “NEWS FROM DOWN UNDER: NE OBLIVISCARIS AND DEVOLVED”