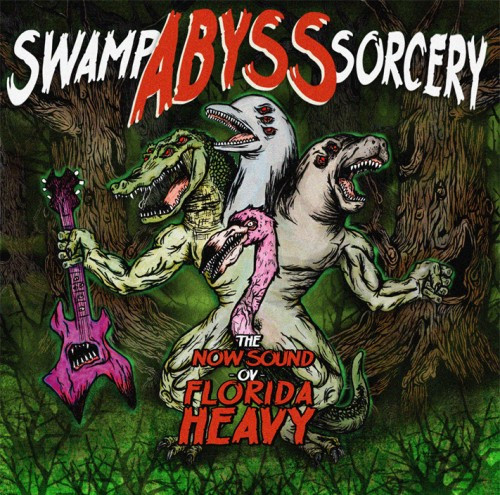 According to the National Park Service, Florida’s Everglades swamp is “the largest subtropical wilderness in the United States.” It’s home to a wide variety of rare and endangered species, many of whom you would not want to meet up close and personal, including alligators, crocodiles, cottonmouths, Boa constrictors, Burmese pythons, rattlesnakes, and poisonous toads.

But there are other, far more menacing creatures in Florida and they’re crawling out of the abysmal swamps to eat your face.

I’m referring to the metal bands whose music is collected in a killer comp that’s available for free download on Bandcamp. Naturally, it’s called Swamp Abyss Sorcery, and it was packaged up by Satanik Recordings (who also released that Prostitute album we praised not long ago). The comp includes music by a few bands we already knew about and liked here at NCS, including the tar-choked, grungy, inexorable sludge metal of Shroud Eater and the crusty blackened thrash of Hot Graves. But man, they’re just part of the nasty menagerie of slavering  creatures crawling and flying out of this download.

I’ve embedded the Bandcamp player after the jump so you can sample the sounds. Seriously, there’s some mighty fine shit to be had here. To do the download, go HERE.