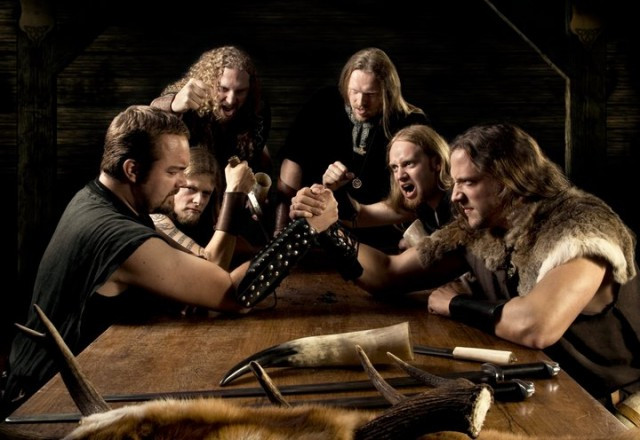 (You remember Trollfiend, don’t you? He used to hang around these parts more often before he started his own metal blog, ALSO, WOLVES. In February, he graciously (and glowingly) reviewed Batavi, the new album by Dutch folk/pagan metal band Heidevolk. The review is here. Subsequently, he conducted this e-mail interview with Heidevolk’s vocalist, Joris den Boghtdrincker. Wait for the insightful Q&A about growing Viking beards . . .)

Your vocal arrangement is pretty much unique. How did that come about? Was it chance or planned?

Me and Jesse, our previous singer, met up at a concert and after a few beers we came up with the idea of a choir-like vocal style for a metal band. It wasn’t long before we got in touch with other guys who wanted to start a folk metal band so we decided to join forces. We took our mics to the rehearsal room and started experimenting with combining our vocals. Ah yes, the good old days of 2002!

How many drinking horns do you own?

One. I used to have two but the other one got lost at Ragnarök festival in Germany. I wonder to this very day if it was because of an overzealous cleaner, or if it was stolen. It hasn’t popped up on E-bay so far. I’m still trying to come up with a fitting curse for the thief in case it was indeed stolen. Any suggestions? A drinking horn can cause a lot of nasty injuries and embarrassment when not handled properly, you know. That reminds me of the time our old guitar player Sebas mistook a blowing horn for a drinking horn. He only found out after he poured the beer in.

In an interview you did for the Death Metal Baboon blog, you said your new album Batavi was going to have a more “metal” sound.  I thought you were pretty damn metal already, but there’s no denying that Batavi has a more aggressive, heavier sound than, say, Uit Oude Grond.  Is that a direction you plan to pursue further?

There’s really no telling what direction we’re going to go with on the next album at this point. Might be faster, might be more folk, might be gloomier. I can safely rule out all things that have anything to do with synthesizers and female vocals, but other than that we’re basically a bunch of musical honey badgers if you catch my drift. 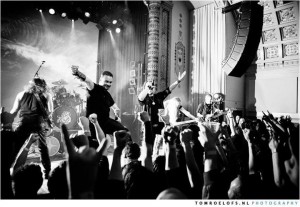 When wearing furs, do you prefer wolf or bear? Is there a store somewhere that you can go to for pelts, or do you have to hunt and kill the animal yourself?

Bear is so 500 BC! Wolf fur looks way better, but they’ve become rather scarce so I’d never want them to be shot to make us look cooler than we already do. You can buy stuff like that in Scandinavia and eastern Europe, but I’d only wear it if I had killed the animal with my own bare hands trying to save a damsel in distress. Women can handle themselves just fine these days, wolves are few and far between in the Netherlands, and I’d probably run for the nearest tree when confronted with one, so I’ll just stick with clothes made from plants.

When on tour, what is your beer of choice? Are you able to find ‘beers from home’ when you’re on the road?

Most of us aren’t picky drinkers but beers like Grolsch, Hertog Jan, and Jupiler are among our favourite prey. I can also recommend Lasko Zlatorog from Slovenia and Hansa Fatøl from Norway. We never played in Norway, but should we play there someday that’s what we’ll be drinking. It’s best to come prepared, you know?

Speaking of touring, is there any chance we’ll be seeing you in North America any time in the near future?

We told our booking agency we’d really like to play there, so I hope they can make it happen someday soon! It would be fantastic to see the States and Canada, and there’s quite a few people of Dutch descent so it would be cool playing for them too! What beer should be put on our rider?

In the review I did of Batavi I said that I think North American fans aren’t as into folk, pagan or Viking metal as much as our European brothers and sisters partly because we don’t have the same connection to our past. How important to your music is that connection? Would you ever consider doing an album inspired by some other culture, or is Dutch history the primary force behind Heidevolk?

You may have a point, but although Europeans may be sitting a little closer to the fire I personally see no reason why people in North America (or any other part of the world for that matter) cannot feel connected to their roots in the old countries. A lot of people here seem disconnected from- or uninterested in their backgrounds too.

Of course it helps when these things are passed on to you in one way or another, but everybody can dig for his roots on his own too. I’d be the last person to tell other people what they should or should not do, but getting to know my people’s past has enriched my life tremendously. Even though other cultures fascinate me too, the whole concept of Heidevolk is rooted in our own background, so to us it’s fundamental for our music and lyrics. This is what we do. 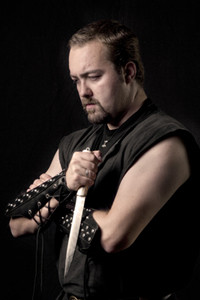 I am attempting to grow a Viking beard. Any tips?

Well whatever you do, don’t shave!

Do you consider yourselves a ‘folk’ or ‘pagan’ metal band?  How important is that distinction?  Do you see such names as a positive identifier for fans of a certain kind of music or as negative stereotypes?

It’s not an exact science. To me ‘folk metal’ represents music inspired by folkloric themes and folk music, whereas ‘pagan metal’ has more focus on mythological themes and a harsher sound. We started out as a folk metal band, but incorporated more and more pagan elements over the years. I guess we’re hybrid. The distinction is no big deal to me, I’m not too concerned to stick to a definition of a genre as a band. To be honest I am more into bands who describe themselves as pagan metal, as I have come to associate a lot of the folk bands with tacky music and an insincere attitude.

Are there any other up-and-coming Dutch bands you think the rest of the world absolutely needs to hear?

Mondvolland, who started out as a folk metal band, seem to have thrown the rulebook out the window with their latest songs. They’ve made quite an interesting change of direction, so that’s definitely a band I’ll be monitoring! Check out the Pestvogel EP, you can download it for free!  [Editor’s Intrusion: we reviewed Pestvogel here.]

Although I am a native English speaker, most of the music I listen to is not sung in English. Do you feel that without a good grasp of the language, fans like me are missing out on the full experience? Or do you think that as long as they dig the music it doesn’t matter?

As a musician it’s all about expressing the feelings we get from our sources of inspiration, rather than preaching or giving people a message that they can only interpret in one right way. A listener experiences, interprets, and ultimately decides what the ‘full experience’ is, not us. A painter wouldn’t tell someone how to look at his paintings. We always include liner notes so people can get a general idea of what the songs are about.

Do you feel that pancakes (which were invented by the Dutch) are adequately represented in the rest of the civilized world?

No, which sucks for the rest of the civilized world really. Being a huge fan of pancakes myself, I can only encourage those of you out there who are not yet familiar with this rare Dutch culinary highlight to grab every chance you get to eat one!

In folk metal there seem to be two ends of a spectrum, where one end is serious “we are goddamn Vikings” and the other end is beer-swilling drunkenness. Do you think humour is important in folk metal or do you feel like bands such as Alestorm cheapen the genre?

There is a bandwidth between the profane and the spiritual between which all sane people must levitate. Overindulgence in either earthly or pious matters will make you look like a fool in my eyes. I don’t judge bands by the same standards, though. Some are just there for the sake of entertainment and others are trying to convey a more serious message. I  guess it’s safe to say Alestorm – a band I don’t consider to be either folk or pagan – belongs to the first category. We’re good friends with them and they do a hell of a job entertaining people with a load of nonsense!  As for bands who do sing about more serious matters, I think there’s always room for humour just as long as the topics are treated with dignity and respect. 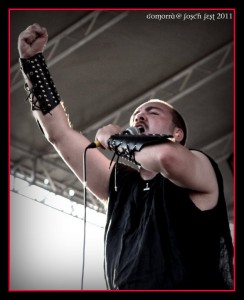 If you could organize your own festival (with Heidevolk headlining, of course) what would you call it and what other bands would you want on the bill?

Our other vocalist Mark has already come up with a name: we could call it the Bring Your Own Knife festival. I think the bill will feature bands like Manowar, Mötley Crüe, W.A.S.P., and of course Gernotshagen, XIV Dark Centuries, Primordial, Kampfar, Skyforger, Menhir, Hades (Almighty) and a whole lot of others. In addition, we would definitely fly in Dream of Nebiros from Mexico, who still hold the title for the most hilarious song title. It’s going to be a two-month festival.

That’s about it! Thanks again for taking the time to answer these!

Anytime, Trollfiend! It’s been my pleasure. Thanks for your interest in Heidevolk! Hope to play on your shores someday soon!

6 Responses to “AN NCS INTERVIEW: HEIDEVOLK”