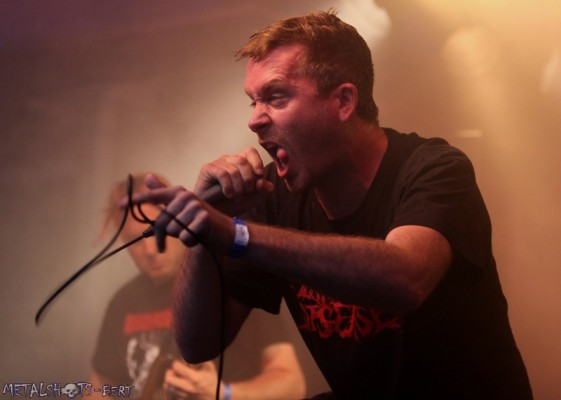 I didn’t write our review of Cattle Decapitation’s new album, Monolith of Inhumanity. That’s because I’m too busy taking care of the really important shit around here, like writing posts about Angela Gossow’s abs. But that doesn’t mean I disliked the album. Far from it. In fact, I think it’s the best album Cattle Decap have ever done and it’s one of the best albums of the year. So there: I guess that’s my review.

One part of what makes the album such a riveting listen from beginning to end are Travis Ryan’s vocals. The dude is a vocal chameleon, or perhaps a vocal schizophrenic. It’s as if he’s inhabited by multiple personalities, each of which expresses himself in a distinctive (and thoroughly insane) manner, and all of whom sound fucken killer.

Today, Cattle Decap unveiled a studio report that focuses on the vocal tracking for Monolith of Inhumanity. I guess it’s kind of putting the horse after the cart, since studio reports usually precede album releases, but I’m glad they released it because it’s very entertaining to watch. And I say that as someone who really doesn’t watch studio reports very often because I’d rather be listening to the damn music, y’know?

In addition to Ryan, the video includes the recording of the gang vocals on “The Carbon Stampede” by The Cephalic Carnage Community Men’s Choir, consisting of all current Cephalic members and alumni Jawsh Mullen and Zac Joe. It also seems clear from the video that producer Dave Otero had a lot to do with Cattle Decap’s stretching of their talents on Monolith. For which we owe a hearty THANKS MOTHERFUCKER!

Check out the video after the jump. It’s fun (and thanks to TheMadIsraeli for tipping me to this.)

One Response to “CATTLE DECAPITATION STUDIO REPORT IS QUALITY ENTERTAINMENT”