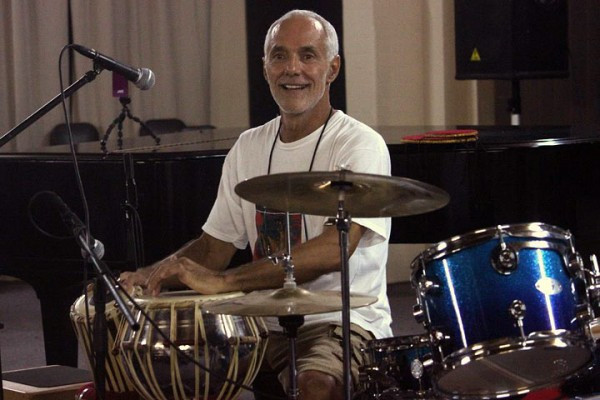 Percussion is an important part of almost all forms of music. Of course, it’s vital to metal, and it’s not limited to the drums. I may be stretching the dictionary definition of the word percussion, but I’d go so far as to say that in genres of extreme metal that use distorted down-tuned guitars and bass, those instruments are used more for percussion and rhythm than for creating melodies.

The presence of percussion instruments in all the world’s cultures stretching back many thousands of years suggests there’s something about the appeal of beat and rhythm, the patterns of sounds and silences, that’s innate in human beings, something we’re born with rather than something we’re taught. Maybe it comes from the beat of the heart we heard in the womb, or maybe it’s a puzzling product of natural selection, but whatever the explanation, the human affinity for rhythm — and especially for percussion — seems like an essential part of who we are (even for spastic white-bread dudes who can’t dance to save their lives).

In this post I’ve gather some fascinating videos of some fascinating people doing fascinating things with percussion, and what they have in common is that they’re using their hands and fingers to strike a variety of different instruments (and machines) directly. The music isn’t metal, but it’s metal, if you know what I mean.

I learned about Efrain Toro because my wife and I had the pleasure of meeting and spending a little time with his daughter and her new husband on their honeymoon last spring while we were on vacation. Efrain Toro is a Puerto Rican percussionist and music teacher who has some interesting ideas about rhythm. Much of what I’ve read about his theories is over my head and I suspect would mean a lot more to people who, unlike myself, have some actual musical training. But from what I’ve read about him, he seems to be regarded as one of the best percussionists in the world, across a wide range of musical styles and types of drums.

His resume (which you can read in detail at his profile on the DrummerWorld site) is really damned impressive. He has performed and recorded with a striking variety of musicians and bands, as well as recording albums of his own. He has written 16 books on the theory of rhythm. He has worked for six years as a clinician, product specialist, and designer for the Roland Corporation. And he is considered an expert in MIDI technology.

He has recorded a number of video interviews (collected here) explaining his theory of rhythm, with demonstrations that involve many other well-known percussionists. But being just an ignorant fan, what I like best are the videos I’ve seen of him performing on a percussion instrument called the cajon. Check these out:

Going back to the point I made earlier about percussion instruments not being limited to drums, this next video (filmed in July 2012 at TEDGlobal) features two amazingly talented practitioners of what’s called “percussive guitar”. One of them, Usman Riaz, is a 21-year old Pakistani musician who learned the style of playing by watching masters of the art on YouTube. He’s followed in the video by one of those widely recognized masters, and one of Usman’s heroes, Preston Reed. And then at the end, the two of them jam together.

Thanks to NCS reader Utmu for sending me the link to this. I’d never seen this kind of guitar playing before, and it’s a real trip. The short interview at the finish is pretty cool, too — and there’s one more jaw-dropping duet that comes after it, so don’t leave the video before it’s over.

For more info about this duo, go here.

Abraham Orellana, better known as AraabMuzik, is an American hip hop producer and performer who first rose to fame via the internet, making live beats and instrumentals using a machine called the Akai MPC (Music Production Center, formerly known as MIDI Production Center). The following video is a live club performance. My jaw dropped again watching this, especially the shit that he starts doing right after the 1:00 mark.

I found one other video, kind of in the same vein, that I thought was impressive. This time the performer is Jeremy Ellis, and he’s using a device called the Maschine Mikro:

Alright, that’s all the percussion I got for now. We’ll get back to metal in today’s next post.

P.S. For those with sharp eyes and sharp memories, I mentioned the cajon not long ago in a review (here) of the new album by Ukrainian heathen dark metal band Khors — because they used the cajon in one of the very cool instrumental tracks on that album.