As a genre term, “blackened death metal” is imprecise, which of course doesn’t distinguish it from all other genre terms. For example, I’ve seen it used to describe the two subjects of this post, despite differences in their sound. I happen to be thinking about these two bands because of new things I’ve seen from both of them in the last 24 hours. I’ve also been thinking about the fact that Western Canada and New Zealand seem to be breeding grounds for many of the best “blackened death metal” bands on the planet — hence, my use of the word “axis” in the post title. More thoughts below . . .

As previously reported, this excellent band from Edmonton, Alberta, have a new album entitled Embers and Revelations due for release by Relapse Records on October 9 (pre-orders are already being fielded here). I first discovered them in December 2010 (and wrote about them here) through a tip from NCS patron SurgicalBrute. The band was started by frontman Vetis Monarch in Bangladesh before his eventual migration to Canada, and since then Weapon have become consistently stronger with each new release.

Obviously, the backing from Relapse is going to help spread this band’s name around at an accelerated pace, and I have a feeling that fans are going to eat up this new album like famished wolves at a fresh kill. What I’ve heard from it so far are a teaser clip that we featured in a post earlier this month and now the title track from the album that got its premiere at Pitchfork.

That new song is one of the best Weapon assaults I’ve heard yet. It is indeed a fusing of elements from both black and death metal, combining sick, gut-ripping guitar chords, blasting drums, and voracious low-end vocals. It also includes a scything tremolo melody and booming groove. Awesome music, which I strongly recommend you check out at this location. Weapon’s Facebook page can be found here.

“Blackened death metal” can also be used to describe a different kind of music, a style that some people call “war metal” and I’ve called “apocalyptic death metal” and “apocalyptic prog” (because of the ultra-violent, inhuman atmospheres of dread and catastrophe that the music creates). I’m thinking of bands such as Blasphemy, Mitochondrion, Axis of Advance, Antediluvian, and Rites of Thy Degringolade, all of whom are located in Western Canada (and while thinking about Western Canada, I’d include Auroch in the category of “blackened death metal”, though they’re stylistically closer to a band like Weapon than war metal).

While excellent war metal / apocalyptic death bands are scattered throughout the world, there seems to be another particularly heavy concentration of them in a place you’d reach at the other end of  an axis drawn from Western Canada southwest across the Pacific: New Zealand.

We’ve written previously about Diocletian and Heresiarch (who share certain band members), and now we need to pay attention to . . . 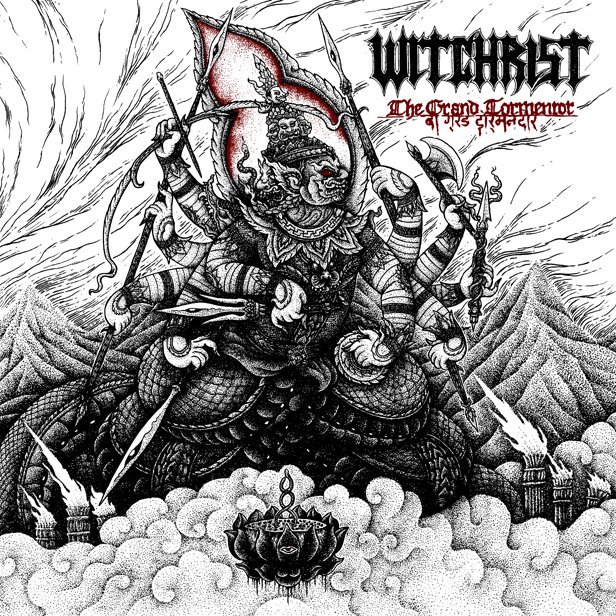 Witchrist have been recording music since 2008, and their debut album Beheaded Ouroboros (2010) garnered a lot of praise from aficionados of radioactive music. Witchrist shares a member (drummer Cameron Sinclair a/k/a Necrobastard) with Diocletian and Heresiarch, as well as an affinity for chaotic, harrowing, soul-wrecking sonics.

We’ve actually paid some attention to them already. In a guest post back in January, SurgicalBrute told all of us to be on the look-out for the band’s projected 2012 album, The Grand Tormentor, and it did indeed emerge in June (and is being sold by Osmose Productions here). And I am an asshole because I haven’t yet heard it.

What I’ve heard (and seen) is the band’s recently released official video for “Wasteland of Thataka”, which appears on the new album. I also found a YouTube clip of yet another song, “Exile”. Both of these clips are below. Witchrist deliver raw, jagged, horrifying blasts of death metal with flensing, blackened riffs and a core of tarry doom. I’m sure liking what I’ve heard so far.

Witchrist from B Southwell on Vimeo.

You can stream two more tracks from The Grand Tormentor at CVLT Nation, and you can find Witchrist on Facebook here.

17 Responses to “THE AXIS OF BLACK DEATH: WEAPON AND WITCHRIST”