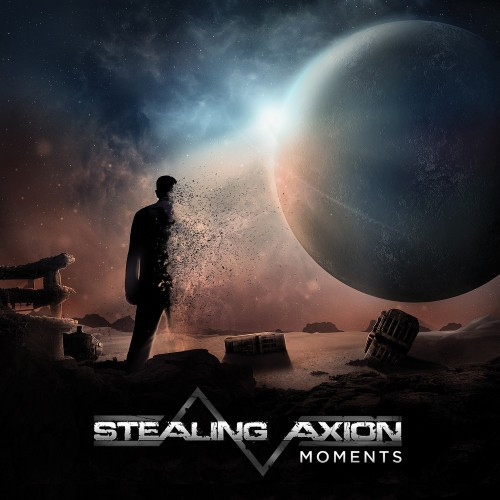 (TheMadIsraeli follows up our full-album stream of the debut album by Stealing Axion with this review.)

I have been so hyped for this album it’s hard for me to even quantify.  Stealing Axion absolutely wowed me with their self-titled free EP (which I reviewed here); it combined progressivism, the best groove in the Meshuggah/Textures school of thought, and a refined sense of dynamics between brutality and melody.  The band demonstrated that they knew how to write really fucking good metal and how to hit a broad spectrum of notes while carrying all of it off equally well.

In my mind, Moments is the quintessential modern metal album, demonstrating the best of what modern groove has become in heavy music.  I am going to warn NCS readers, this album is DEFINITELY an exception to the rule, with close to a 50/50 split of brutal and clean vocals going on here.  As with all exceptions to the rule though, I TRY NOT to review something that breaks our mantra unless it’s really fucking good.  Moments IS really fucking good, I assure you (unless you’re just a kvrmudgeon).

A few facts you need to know about this album before I begin: It’s a concept album about the end of the world.  Because of its particular story, the song flow is a bit askew from what you might expect (e.g., the album starts with one of the softest songs).  It is LONG (77 minutes), and a lot of the longer songs are peculiarly structured.  You won’t get the payoffs you’d typically expect on what feels like a buildup, and songs don’t end on the notes you’re absolutely convinced are coming, but by the same token some of the moments of brutality on this album completely wreck your intestines when you least expect them to pop up.  This is a truly progressive album. 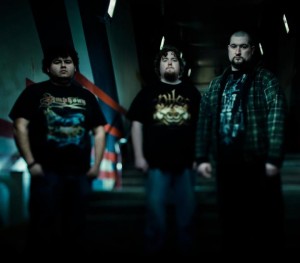 Stealing Axion’s sound, in its essence, can be described as follows:

There are hints of Meshuggah, Textures, Hacride, and like bands  EVERYWHERE, in the best way possible.  Much of the riffing on the album channels these bands; this is through and through a progressive groove metal album (NOT A DJENT ALBUM, THERE IS A DIFFERENCE).  The riffs rely on the punch of the low-tuned guitars and the rather twangy tone achieved in them thanks to the particular guitar/bass tone combo (and btw, the bass tone on this album is fucking badass).

The drumming is heavily syncopated and highly technical (the groove emphasis gave drummer Blake Ferris a great deal of room for adding flourish).  There is, of course, the expected ambience, the clean guitars that hang over the distorted sections, the clean/brutal vocal layering, and an emphasis on using expansive slow grooves to deliver crushing fatalities.

It’s what the band does with these elements and how they mix, match, and contort them that gets me.

The first song, “Mirage of Hope”, is the kind of opener that may throw people off, considering it’s not as heavy as most of what follows it.  Its verse riff is a melodic, yet semi-twisted affair, where the notes are slightly bent out of tune to give it just enough grit while Dan Forbrich wails over the music with his powerful vocals.  I’d say that he pretty much employs death metal vocals over the band’s music, something that is definitely odd considering its instrumental content.  This is counterbalanced by the complex and thick walls of clean vocal harmony from Josh DeShazo that go on in the other parts of the song.  It’s got a catchy theme, too, an open-note palm-muted machine-gun rhythm with a melodic lead over it that’s pretty tasty.

The next song “Solar” is a bit different.  A waltz-tempo number with a moody verse punctuated by a bass line that throbs like a human heartbeat.  The riffs when the heaviness kicks in are sludgy and cognitively dissonant as all fuck.  This is punctuated by the clean vocal lines that fall in and out of key with odd notes that still fit.  It all builds up to a riff that’s brutal and sounds disoriented and confused, in a way, with harmonic dissonance brought in with the bass playing odd harmonies (it’s awesome that the bass is audible enough on this album to pick that stuff up).  The song ends with a total Meshuggah Destroy Erase Improve moment that induces teeth-gritting wall-smashing. 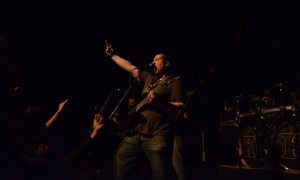 “Everything Or Nothing” kicks the brutality up a notch.  After a soothing acoustic intro and what feels like a pretty mellowed-out melodic idea, the guitars kick in and after carrying on for a bit, the song’s simple, groovy-and-grinding-as-fuck-verse riff kicks in.  This song is a steamroller that just mows down the listener, flattening you and then eviscerating the corpse into chunks for good measure.  The coup de grace on this yummy groove sammich, however, is the song’s outro: a droned low-tuned atom bomb that competes with Meshuggah’s heaviest moments.

“47 Days Later” doesn’t relent one iota either.  Its cadence sounds like it would be employed by Lamb of God and it has the hammerhead impact of Fear Factory.  The riffs are unbelievably fat, machine-precise, and noodily.  I also highly enjoy the intense burst of black metal blasting fury midway through the song.

“The Unwanted Gift” fades in with a flesh cutting arpeggio that is soon accompanied by pronounced rhythmic chugging to give it some impact.  Musically, this is probably the most simplistic song on the album, but it’s effective because the riffs are catchy and the clean vocal lines really stand out.  Very nice, heavily fusion-influenced lead guitar work in it as well.

“Eventide” is one of the softest songs on Moments despite being one of the few that makes exceptionally noted use of the 8-string low end.  Only one part in this song includes brutal vocals, with the rest being all clean singing, and it’s structured more like something of a ballad.  It’s undeniable, though, that this song is hypnotic.

“Collapse” is a bone-grinding groove-machine 8+ minute epic.  It’s full of dissonant riffs, eerie atmospheres, and polyrhythms out the ass that twist your brain into the shape of an ankh.  This song is all about the build-up to its last three minutes:  Rage-face-inducing brute-force groove.

“It’s Too Late Now” is definitely the softest song on the album.  Beginning with tranquil keyboards and introducing itself further with shimmering clean guitars, the song feels like and sounds like a lamentation.  The melodies are calming, yet there is a slight unease throughout the whole song.  The song peters out and moves into “Sleepless”, a track that is heavier but still uses loud and soft dynamics to create a build-up to the album’s finale.

“Moments Part 1” and “Part 2” are not the same song, but two epic-length numbers that brutalize yet pull emotion from the listener through the force of their conviction.  “Moments Part 1” is full of twisted, catatonic riffs that punch through you with the force of a piledriver until the song’s drama-filled four-minute prog-fest midsection.  It features lots of guitar solos, dramatic melodies with fusion shifts in key, and a brutalizing breakdown that ends all of it amongst a menagerie of horror-filled guitar feedback and dissonance. 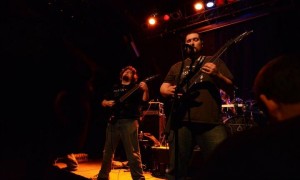 This is where “Moments Part 2” kicks in, with a concrete-splitting intro that calls back immediately to the old days of Meshuggah — a titanic blast of caustic drums and guitar/bass chugs that cut through your very bones into one of the heaviest riffs on the entire album.  The riffs continue along the lines of the Fear Factory-esque vibe of the previous song, but hit with even more ferocity and frantic desperation.  The song’s first solo sounds like what must happen when a brain goes through the most violent of seizures.  What follows is a soaring display of guitar acrobatics over an extremely long solo section.  The ensuing next six minutes are absolutely enrapturing. Whether it’s the melodic sections filled with complex vocal harmonies or the sections that jackhammer your solar plexus into shards, you can’t stop listening to it.  The song ends with a quiet, somber piano outro that hits an odd, disorienting, and fearful note.

Moments is more than simply an impressive debut. This is pushing the envelope on a style I think many have pronounced dead by this point.  Not yet.  Not with bands like Stealing Axion around.

I usually do that bullshit where I talk about each member’s performance, but that’s really pointless here.  This band, at its core, is a collective of insanely talented, insanely aware musicians.  Hearing songwriting this good, this convincing, and this absorbing is rare.

Also, the mix by Acle Kahney of TesseracT fame fucking rules.  So clear, so thick, so heavy.

One of my top 10 picks of the year.  YOU MUST buy this.  They definitely deserve the money.

EDITOR’S NOTE: The Moments CD can be pre-ordered here or here (U.S.) or here (EUR). You can connect with Stealing Axion on Facebook via this link. Our full-album stream is at this location.