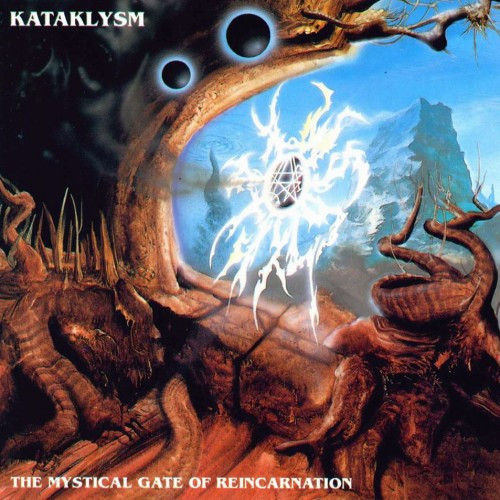 (In this post, TheMadIsraeli begins his reconsideration of the music of Kataklysm. To see what this is all about, check out his introduction to the series here.)

It’s time to begin our journey into the music of Kataklysm.  I really couldn’t think of a benchmark for how far back I should start in reconsidering a band’s music, but in this case I figured the band’s debut EP The Mystical Gate of Reincarnation was a good place to begin.

I feel it best to start by noting the line-up differences between then and now.  Kataklysms’s current line-up is Maurizio Iacono (vocals), Jean-Francois Dagenais (guitar), Stéphane Barbe (bass), and Max Duhamel (drums).  Iacono and Dagenais are founding integral members of the band, but they had a different drummer at the time of this EP (Ariel Saied), as well as someone else who handled the vocal duties by the name of Sylvain Houde.

Sylvain Houde played a huge part in what made early Kataklysm what it was, as he had one of the most overwhelming bestial voices out there.  Iacono played bass at this time, providing backup vocals here and there.  Dagenais’ guitar style was also quite a bit different.  The mix for the time (’93) is really good for an underground death metal EP.

The style going on here is sludgy, messy, but most of all bestial.  The fast-as-fuck-full-of-riffs-and-transitions style of writing is something pretty atypical of death metal at the time. You could hear this kind of shit on the early Cryptopsy, Suffocation, or Immolation releases as well, and it works.

This EP also has a rather blatant grindcore feel to it, with a speedier, more chaotic sense of things almost falling apart.  This is at least my first impression as I listen to the opener “Frozen in Time”.  It’s melodic, but there is violence behind it, and Houde’s vocals are just overwhelmingly… demonic sounding; the melodic riffing becomes an epicenter of entropy.  There is of course, riffing that just completely sacrifices all semblance of melody for sinister vibes, which is quite welcome.

“Frozen In Time” is pretty all over the place as well. I’m over two minutes into its more than seven minute run time, and it has yet to repeat a riff.  I’m finding myself entertained though, and it gets me energized.  Turns out it never repeats a single part for all seven minutes and twenty two seconds of it.

The rest of the EP is like this, and certainly paints a completely different musical portrait compared to the band you hear now.  The EP also includes what in my opinion is one of the best Kataklysm songs ever (and the first of theirs I heard way back in 2001), “The Orb of Uncreation”.  This song… I don’t even know how to describe it.  It really does sound like the gates of hell are being opened; you see damned souls flying out of it, screaming like banshees in agony.  The thing that makes this EP for me, though, is the vocals, so overwhelmingly insane.

This is the Kataklysm I first heard, and I still love this shit to death.  This is a rather crazy debut EP, even by the brutality standards of 1993.  The riffs are sinister, the vocals are overwhelming, and the drumming is impeccably unrelenting.

What do you guys think?

5 Responses to “HIGHER CRITICISM: KATAKLYSM’S “THE MYSTICAL GATE OF REINCARNATION””