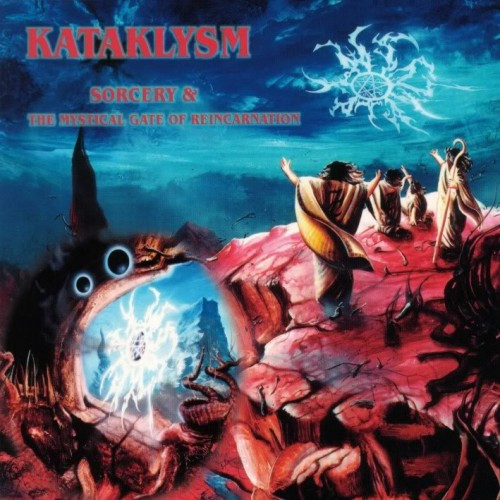 (In this post, TheMadIsraeli continues his reconsideration of the music of Kataklysm. To see what this is all about, check out his introduction to the series here.)

As you can see, this cover is for a version of Kataklysm’s 1995 debut album Sorcery that includes the EP I just reviewed.  There is actually an EP before this album called Vision the Chaos that only has two songs on it, but I decided not to bother as the Kataklysm fandom doesn’t seem to give two shits about it either.

Sorcery is the band’s first fully fledged album, and one that within its first seconds immediately distances itself from the style of hyperblast insanity found on The Mystical Gate of Reincarnation.  The first thing you’ll notice is that the band has actually tuned their guitars UP from their EP days, moving from C to D (for all the guitar geeks out there who care), and the tone of the music has an overall sort of blackened edge to it.  The mix is very trebly, very harsh to the ears in comparison to The Mystical Gate…, which was rather well rounded for a mix at its time.

The music is also far less manic, still as deadly but with a more precise yet varied attack.  The thing about this album that will throw people off, I think, is that the band almost sounds as if they didn’t know what they wanted to bemusically.  Some of these songs are blistering death metal mammoths that are all over the place and have more of an emphasis on alien or unconventional melodies, while those numbers are completely contradicted by trailblazers that are purely melodic death metal.

Houde’s vocals are still a major factor I can’t get over.  I don’t understand why he didn’t go on to join other bands, because this man had some of the most pissed as fuck sounding vocals I’ve heard.  His voice is so putrid and disgusting, yet he puts such rage behind it.  I wouldn’t be surprised if he quit Kataklysm because he ruined his voice.

But that aside, the music on here is really good.  It’s a bit different, maybe a bit more experimental than most death metal bands at this time (I’d qualify this as tech-death myself, as it’s quite structurally all over the place and some of the riffs on here are web weavers), but this is nonetheless a rather captivating album.

I only find the production a bit grating, which as I said tends toward a raw, harsh, blackened edge.  I think a black metal influence was intentional, though, as a lot of the melodic riffs, tremolo picking and heavy in nature, feel like black metal in their character, and Houde’s vocals often break into black metal style banshee wail territory.  On the other hand, it’s rather interesting that Iacano uses a grindcore bass tone on this album.  I’m pretty sure you’ll be immediately reminded of the burly stone-splitting tone of Napalm Death’s Shane Embury.

Sorcery is, in my final thoughts, an excellent death metal record and one of exceptionally high caliber for its period.  I can definitely see why Kataklysm would’ve had a rabid fandom back in this day and age.