Though the band last played here 11 years ago, there was very little rust to be found on them, as they bled their instruments dry of every hypnotic riff and spiralling, dissonant lead they could wring out of them. 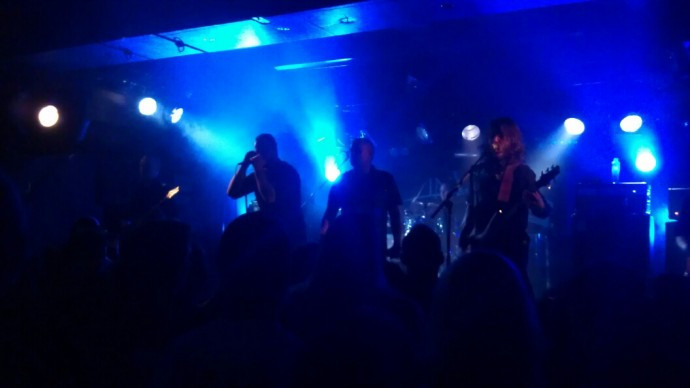 Up next was the proggy, multi-layered melodic death metal of In Vain, down in the depths of John Dee. One of the bands I was most looking forward to of the festival, In Vain actually only recently grabbed me as a convert, so this would be my first experience of the group in the live arena, as well as my first chance to hear material from their just-released third album Aenigma (a copy of which I bought and will be reviewing soon, don’t worry).

Complex melodies and interwoven harmonies soared over hammering kick-drum rolls and taut, blackened tremolo runs, the band bringing an impressive heaviness to the venue (particularly during an electrifying run-through of “The Titan”), matched by the gleaming intricacy of their multi-part vocal harmonies.

Coming across as something akin to the melodic death metal counterpart to Vintersorg, this impression was only strengthened by the guest appearance on “Image of Time” of Borknagar vocalist/keyboard-player Lars A. Nedland (Vintersorg’s bandmate in the aforementioned group, and also appearing on the Saturday as one of the brains behind Solefald). The only real issue was that supposed ‘main vocalist’ Andreas Frigstad is steadily becoming more and more marginalised, particularly on the newer material, with more focus falling on the vocal interplay of Nedland, Haland, and Wikstol, as well as on Nedland’s impressive death-roar.

Still, the band put on an effortlessly impressive show, and have such a host of captivating songs to their name that they certainly left the audience wanting, demanding, more. 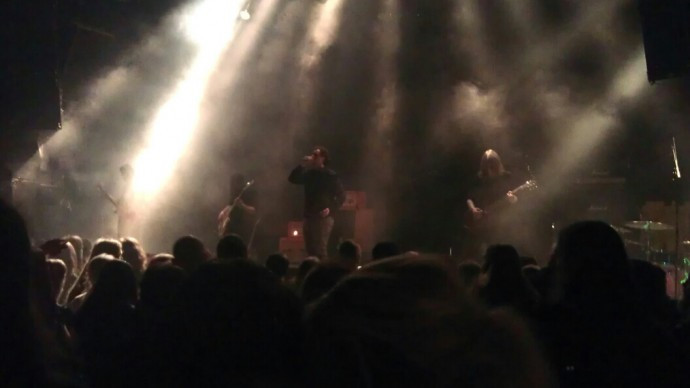 Sweden’s Witchcraft (filling in for the absent Ghost) were next to take the main stage, and were a band who – apart from the name and a vague notion of their genre – I was completely unfamiliar with before they started playing. Obviously a band apart from most of the others on the bill, their psychedelic retro doom-rock had an utterly timeless appeal, existing in total denial of trends or the prevailing winds of change, and forging a path based on pure old-school love for heavy rock/metal.

Frontman Magnus Pelander was possessed of an absolutely mesmerising voice, which settled in perfectly with his laid-back, easy-going stage presence, allowing his keen grasp of melody and delivery to really reach the audience. The smooth, smoky vibe of the band was a definite change of pace for the festival, but a welcome one all the same, particularly when both guitarists took turns to deliver one soulful, soaring solo after another. 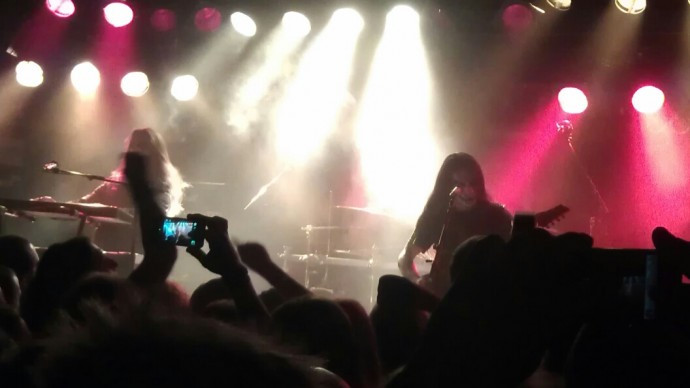 Back down in John Dee I chose to give Dutch symphonic black metal types Carach Angren another chance, as although the band have never done anything for me, I know a lot of people do like them, something attested to by the fact that when I left the venue the staff were operating a one-in, one-out policy.

Why did I leave? Because the band were pretty awful, all things told. Lots of people might like them, but I really don’t understand why. If they’re black metal then they’re the most lightweight version I’ve ever heard (and that’s not only because the band is composed simply of a keyboardist, a drummer, and a guitarist/vocalist). Really, they’re more of a LARP-friendly power metal act with embarrassing pretensions toward darkness. Perplexingly popular and disappointingly dull. 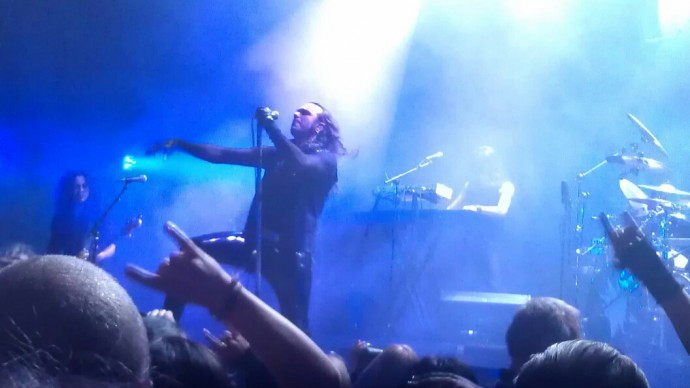 Following this I also decided to give Moonspell another chance, a band I’ve seen before but who’ve never really captured my attention properly. Tonight though was certainly their night, as the band were clearly in tip-top form, from Fernando Ribeiro’s wounded, gothic howl, to Miguel Gaspar’s stomping kick-drums and clever, creative fills. Though the band operate with only a single guitar (along with the requisite bass player and keyboard player), they performed with no noticeable lack in “crunch factor”, delivering their majestic, esoteric songs with a lithe heaviness and a strained, tense aggression.

With a special set built around their first full-length album Wolfheart the band clearly had the crowd eating out of the palm of their hand, even more so when they brought out Carmen Simões of fellow Portuguese goth-metallers Ava Inferi to duet with Ribeiro.

Maybe it was just the combination of right time, right place, right mood, but this time the band definitely won me over, although – as I commented at the time – the sensation that we were watching “evil Nightwish” (not intended as an insult at all) was a bit hard to shake! 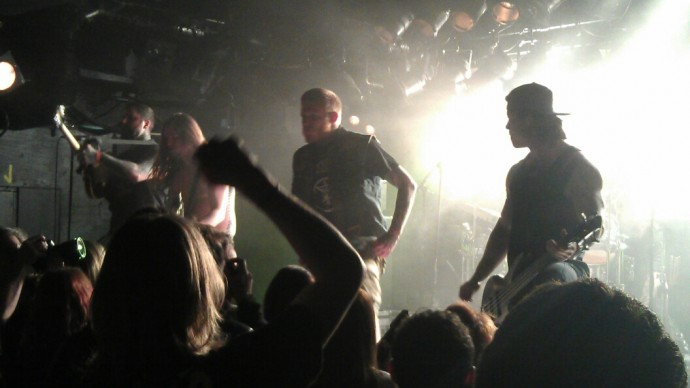 Purified In Blood were the last band to perform on the John Dee stage, and another of those bands of whom I had been peripherally aware of for a long time, without ever actually encountering their music properly. Their thrashy, death-inflected and Hatebreed-inspired metalcore was the perfect tonic to reinvigorate flagging spirits, and the group absolutely tore through a set of bullnecked, belligerent beatdowns and powerhouse metallic anthems, no quarter asked, and none given. 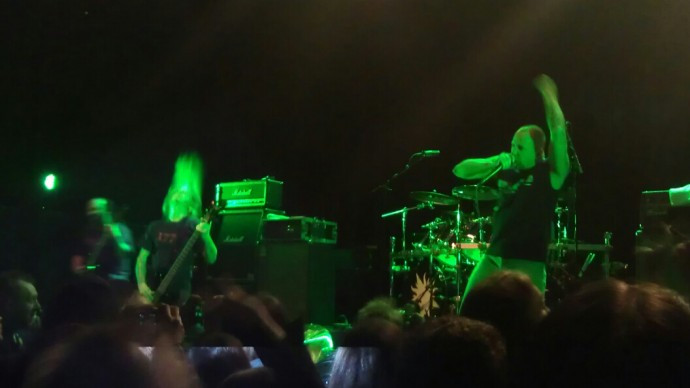 Headlining the evening was the baddest of all badass death metal bands, New York legends Suffocation. With little to no preamble, the band took the stage and proceeded to tear the Rockefeller a new blowhole, storming through cuts from across their 25-year career, ranging from knee-cap shattering classics like “Catatonia” and “Liege of Inveracity” to more modern skull-crushers like “Cataclysmic Purification” and “Rapture of Revocation”. Melding scathing shred-work with pulverising riffs like only they can, the unholy triptych of Boyer, Hobbs, and Marchais were in near-flawless form, bobbing, weaving, and headbanging like men half their age, without missing a note on their tortured strings, while Dave Culross was, is, and probably always will be, an absolute monster behind the kit.

Moreover, it was a real pleasure to see Frank Mullen in his natural element, fronting the band he was born to front. Wearing an ear-splitting grin he marched up and down the stage, delivering his demonic bellow as if it were the most natural thing in the world, all while performing his now-signature karate-chop hands and blasting finger-guns. His obvious enthusiasm and love for the genre is utterly infectious, as is his bluntly spoken between-song banter, always humble, and frequently hilarious. His bit about having a family to support, as well as a 20-year-old daughter to look out for, was a perfect mix of pathos and playfulness.

Suffocation are true kings of the death metal scene, managing to be just as impressive, and just as relevant when they run through a newly minted prime-cut like “As Grace Descends” as when they pull out a stone-cold classic like “Funeral Inception”, both songs fitting seamlessly into the set, as if they were written only moments, and not decades, apart. When Suffocation are on form they’re damn near untouchable, and tonight they were definitely on form.

Stay tuned for more pics and more random musings from Day 3 of Inferno 2013!