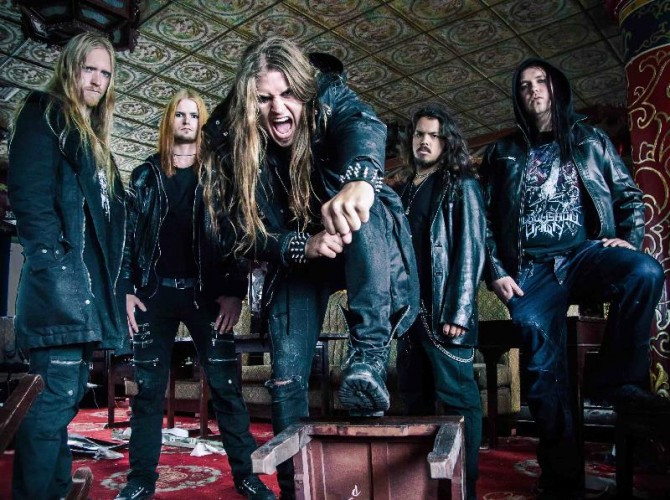 The last time we featured Gothenburg’s Deals Death (here) was way back in April 2012. Their debut album on the Spinefarm label (Elite) had recently been released and they had just premiered a video for the song “Collapse”. In typically eloquent fashion, I wrote that “it pushes all those ‘Fuckitall, let’s headbang!’ buttons.”

Now we have a new video, and a new album on the way, with a September 13 European release date. The album is named Point Zero Solution, and the video is for the title track. And guess what? It pushes all those headbang buttons again.

The video was directed by Patric Ullaeus, who’s a real pro at this kind of thing, so it’s a slick production. Lots of fireballs and contrasts between light and shadow, and of course plenty of opportunities to admire (or get jealous over) frontman Olle Ekman’s impressive physique. The song plays to Deals Death’s strengths, which is to say it’s a thundering gallop of wild-eyed, flame-maned Gothenburgian stallions, all pounding hooves and compulsive riffs, with Ekman’s glass-scraping howls and brief keyboard notes rising above the fray.

I’ve had one spin through the album and enjoyed the hell out of it, but then again I’m still a sucker for high-energy Swedish melodic death metal, and that’s what Deals Death deliver.

Point Zero Solution can be pre-ordered here. The Deals Death Facebook page is at this location. The video is below.