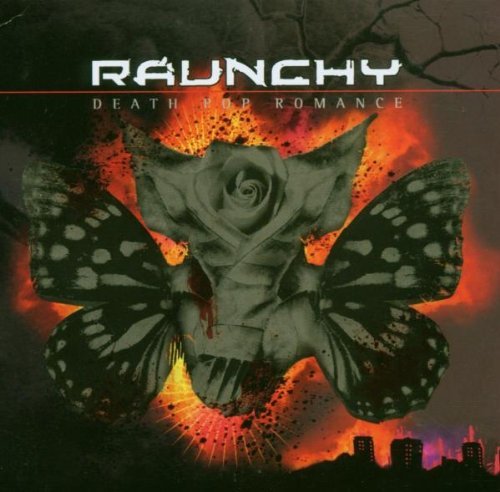 (We all forgot that when DGR joined the NCS staff he was subjected to a mild form of hazing — we challenged him to review the entire discography of the Danish metal band Raunchy. He, however, did not forget, though he did take his sweet time on the follow-through. This is the third part of this raunchy hazing; the first review can be found here and the second review here.)

Raunchy continue to make big shifts in their careers by this point. We’re actually achieving something big here, because we’re starting to move into an era where the Internet really came into its own as a music-covering force, and I can actually try to dig deep into what happened without the wayback machine kicking out gibberish in the shape of a middle finger.

Death Pop Romance has a few things interesting in terms of Raunchy’s history:  This was their first release as part of a new contract with Lifeforce Records, their first disc that put them on the two-year album cycle, and their first disc with vocalist Kasper Thomsen. As usual, I tried to get some perspective from the various NCS hooligans in regards to this disc, in my own stupidity forgetting that this whole thing was supposed to be a joke on me. I got a singular “its pretty good” and my personal favorite response so far, which was just, “You’re seriously doing this?”. There were no dire “abandon all hope!” sort of messages, so even though the disc adheres to the Dimmu Borgir styling of “three words that sound good but make no sense together!” album naming, I’m curious as to what Death Pop Romance has in store.

As has been the case so far, some of this will be stream of consciousness and other bits will be written after a few listens. I made one cursory spin prior to typing this specific paragraph so I already have some minor thoughts but have yet to dig deep or even try to differentiate each song – it almost feels like I have a fifty-minute blank space, and no alcohol was involved to accomplish that. 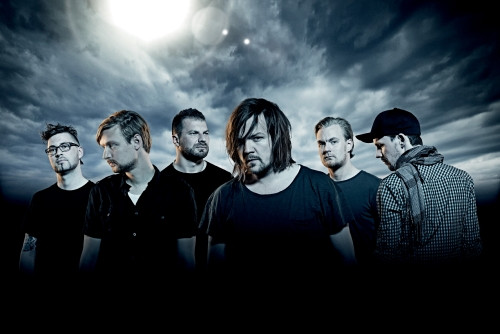 Death Pop Romance seems to be the disc where the “metalcore” descriptor in Raunchy’s many genre listings seems to be coming out strong because wow, do a lot of these songs fit right in with that scene. A couple of the songs on Death Pop Romance even have full-blown breakdowns and at one point it seemed like the band were on the verge of becoming Atreyu for thirty seconds. There’s no more accidental Fear Factory present in this band anymore, just knife-sharp guitar leads and full-blown hardcore screaming.

Jeppe Christensen, the group’s keys player, really steps forward to pick up a lot of the clean vocals on this one – especially when they can double up with Kasper’s screaming. Kasper is a pretty good screamer on this disc, and the combo of the two (plus Kasper’s own singing) is a pretty good replacement for previous vocalist Lars. It adds a whole new element to the band.

The craziest sounding thing about Death Pop Romance is that it actually seems to be the “heaviest” that the band have been so far. Both guitarists, Lars Christensen and Jesper Andreas Tilsted, seem to be shredding away and trying to cram a bunch of leads into each song, whereas before it seemed like both were there as rhythm only. The lead-off section of “Remembrance” where both guitars follow the keyboard intro sticks out as an example.

There’s also a ton of double-bass pedal work on this CD, something that it seems the mastering team on this disc were determined to bring forward as much as possible. It feels like the guys took the formula for Confusion Bay and decided, “Okay, like this but darker, heavier, and angrier”. It’s a little less original, but it sends a clear message of what Raunchy were intending to do back in 2006. It feels like with Death Pop Romance the band were attempting to become a more traditional heavy metal band, still carving out an identity.

One of the unsurprising things about this disc was that the song “Phantoms” was the one that got a music video. That is one of those songs that you hear and immediately go, “There is no way they didn’t try to get this one out there”. It’s a mid-paced tune and could pass for Haven-era Dark Tranquillity in the opening with the echoing guitar and key wall behind it. In addition, the fact that much of the song consists of clean singing and plays with the good-cop/bad-cop formula pretty straight meant that it was probably one of the most approachable songs on the disc. Not even I, in my infinite jadedness, can deny that the chorus of that song is super-powerful, especially in the second verse when the vocals start to canon off of one another.

You might remember from my ramblings on the group’s second disc Confusion Bay that I jokingly mentioned that the band love them a cymbal swing beat, and I’m surprised it took until “City Of Hurt” (on the back half of this album) for it to pop up. But drummer Morten Toft Hansen came through for me on that one by planting one of those fuckers right in the intro. He’s another one who really seems determined to absolutely crush it throughout Death Pop Romance though.

Two songs that have really stuck out so far on this end have been “Persistence” and the album’s second track, “Abandon Your Hope”. Death Pop Romance also has a really strong opener in “This Legend Forever”, which has a guitar lead and key section straight out of Soilwork’s playbook. It’s worked for that band multiple times and it works pretty well for Raunchy. You can tell that “Legend Forever” was supposed to be a statement that Death Pop wasn’t going to play it light.

In comparison to Confusion Bay, I actually enjoy Death Pop Romance about as much, because they feel like two sides of the same coin. One is the heavier spectrum of the other. and although it seems like an obvious path for a band to have gone down, it still works out really well for them. It’s the disc where the melodeath and metalcore categorization for the band really come out. My only thing is that maybe Death Pop Romance doesn’t age as well as Confusion Bay because, unfortunately, metalcore riffs have a tendency to date themselves; if you have followed the music long enough, you can almost pinpoint the exact year something came out by listening to it.

I do think that Death Pop Romance, despite the title and the band’s name, is actually a pretty vicious, biting dog of a disc. I’m sure, though, that the lack of consistency between albums still probably had an effect in making Raunchy a bit of a hard sell. They seem to be very successful over in Europe but they must have had issues reaching the Americas, because I’ll own up to not really knowing of the band until A Discord Electric came out, and even then, as I described in the very first one of these posts, I saw the name Raunchy and probably dismissed it outright. Three albums in, and they still seem to be a chimera of differing styles, which had to be pretty freeing for them but, likewise, probably made it hell to get them out there to people.

This has been a pretty fun bit of discovery, though, because I’ve found two discs so far in Confusion Bay and Death Pop Romance that I actually enjoy quite a lot. They both have made excellent first impressions and are still holding up with multiple spins throughout the day.

Up next is Wasteland Discotheque, which I can tell I’m probably going to get real tired of misspelling along about the second paragraph in. I know barely anything of this disc, other than it includes a cover of the song “Somebody’s Watching Me” and the return of vocalist Lars Vognstrup for a song; which is pretty cool since he appeared on the first two discs.