So here we are finally, Waiting For the End To Come.  When I reviewed the entire Kataklysm discography, it was an interesting exercise, not only for myself but I hope for our readers as well, to rediscover what the band had produced over the course of their long career  Now here we are, with what the band claims is their most technical, most punishing album yet.  Does it deliver?  This is the question that nagged at me after having listened to Kataklysm’s admittedly up and down catalogue.

Quite simply, this may be the band’s best effort of their current, mostly melodic death, direction.  With less groove, more blast beats and blackened scathe, and of course their blistering death metal brawn at work, Kataklysm appear to have crafted an album solely to start pits, invoke murderous thoughts, provoke raised fists in defiance of life itself.  Some of the best songs the band have ever written are on this disc, not to mention that this is the first Kataklysm album I’ve actually had the compulsion to buy in physical form. 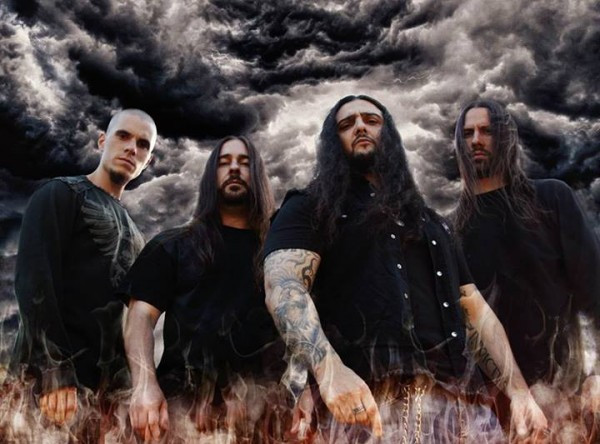 “Fire” is definitely a whole new breed of intensity for the band.  After a funeral hymn of a guitar riff fueled with frostbitten vitriol, the liquefying G-force of the high speed melodic machine gun spray is overwhelming.  The band immediately have a different vibe, bringing a rather God Dethroned/Hail of Bullets sort of majesty to their melodic parts (which was already immediately apparently in the first single “Kill the Elite”), while adopting an animalistic level of bravado during the band’s trademark grinding grooves.  “Fire” sums this up pretty well, probably one of the best opening tracks the band have ever written.  Never has having gasoline dumped on you and having it set aflame sounded so powerful and gallant at once.

The album also burns with an insidious malevolence beneath its dignified air.  It rears its head quite often, sometimes for moments, sometimes for full songs, such as the spine-splitting sledgehammer-blow groove of “Like Animals”.  Other songs, however, maintain a balance. “If I Was God… I’d Burn It All”, which is possibly one of the band’s best songs ever, dances gracefully between ferocious death thrash, regal melodic death, and Fear Factory industrial precision. It is definitely one of the new songs thst should become a live staple.

Waiting for the End to Come is at its best when it’s releasing torrents of slightly blackened melodic napalm.  “Fire” (as mentioned before), “Kill the Elite”, “Under Lawless Skies”, and “Elevate” are the stuff that really catches my ears on this record.  My favorite song on the record, though, is probably “Empire of Dirt”.  It provides the most adrenaline-surging speed rush that the band have delivered in quite some time.

At the end, of course, you either like Kataklysm as they are now or you long for older days and hate what they’ve become.  If you like what the band have been doing in their later years, this is their best album since In the Arms of Devastation”, and it might actually be better.  Definitely a blast to listen to, and one that’s highly recommended.

4 Responses to “KATAKLYSM: “WAITING FOR THE END TO COME””