“Heaven Shall Burn are what you get when you force Earth Crisis and Bolt Thrower to conceive a child, and then have that child raised by At The Gates and Carcass, while supplementing their intellectual development with a steady diet of Kant, Marx, and Baudrillard.” That’s what Andy Synn wrote when he reviewed this long-running German band’s 2013 album, Veto, and it does make a kind of demented sense.

Veto was (and is) an excellent album, and I’ve been surprised that it hasn’t received more of the love it deserves on year-end lists. Perhaps it was hampered by being released relatively early in the year. But regardless, it was universally loved by those of us at this site, and it’s a stockpile of strong candidates for this Most Infectious Song list. However, the one (original) song that stands out most strongly happens to be the one we had the pleasure of premiering here at NCS — “Godiva”.

I say “original” song, because the album includes another highly infectious track that I reluctantly omitted from the list only because it was a cover — a cover of a Blind Guardian classic, with Blind Guardian vocalist Hansi Kürsch contributing vocals to the track. It may be the best of many strong covers HSB have recorded over the years, and so I’m including “Valhalla” below, along with “Godiva”. Enjoy.

Speaking of universally loved, we published not one, not two, but three separate reviews of this Finnish band’s 2013 album, Beyond. As in the case of HSB’s album, it came out relatively early in the year, but it has proven to have serious staying power. And, like Veto, I’m surprised that it hasn’t appeared on more year-end lists.

There ought to be some kind of law against stuffing a single album with so many undeniable melodic hooks and neck-snapping rhythms, or at least some requirement that they be shared with bands who slave away for years and never come up with anything as good as any song picked randomly from this album. It was a foregone conclusion that something from Beyond would be on this list; the tough question was, which one?

Every fan of this album has his or her own favorite, and it’s a given that by choosing only one, I’ll be incurring the wrath of some while pleasing others. But choose I did, and the choice is this one. “There is a tree (far away) / Living in me….” 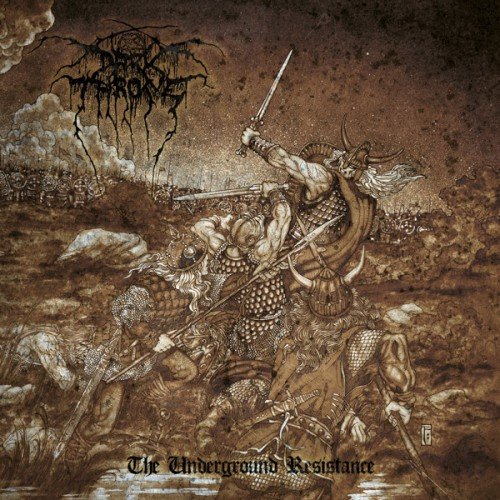 Darkthrone’s 2013 album The Underground Resistance is one of many you will see on this evolving list that we failed to review (even though our man BadWolf interviewed Fenriz about the album last January). That doesn’t mean we didn’t like it. We only have so much time, and we also fuck up. The album has been well-reviewed elsewhere, and I’d recommend this one at Angry Metal Guy if you still haven’t given it a spin.

The song I picked from the album, at BadWolf’s urging, is not only the most infectious song on the album, it’s also the longest. Yet despite its length, it’s a complete kick in the head (and the ass) from beginning to end. It’s also as good a representation as any you could find of the musical space where Fenriz and Nocturno Culto now happily dwell — and how much fun they’re having there. I’ll quote from that AMG review and then let you listen for yourselves:

“‘Leave No Cross Unturned’ is 13 minutes of shameless Mercyful Fate worship. Fenriz busts out some high notes that would make the King proud, although whoever is singing the rest of the song sounds kinda like Ron Royce from Coroner. (Also, I’m pretty sure the lyrics rhyme ‘assholes’ with ‘espressos.’ Awesome.) ‘Leave No Cross Unturned’ more or less sums up Darkthrone‘s mission statement at this point in time: to play metal that is old-school as hell, yet just as blasphemous as their early material, and have fun doing it.”

19 Responses to “OUR LIST OF 2013’S MOST INFECTIOUS EXTREME METAL SONGS: PART 1”