I ran into Raggi later and he explained that the set was all new music, and they hadn’t finished the lyrics yet. Okay, that’s one choice. Azoic’s 2012 Gateways can be found here:

The all-female trio Kaelan Mikla identify themselves as “poetry-punk” on Facebook. To my ear, poetry punk sounds a lot like roughened riot grrl; it’s pleasingly heavy on the bass, but a style of screaming that I never got into.

Nevolution had a fun, dirty sound that occasionally veered into Red Fang territory, but with vocals and lyrics that are best described as radio-friendly. They have a MySpace page: 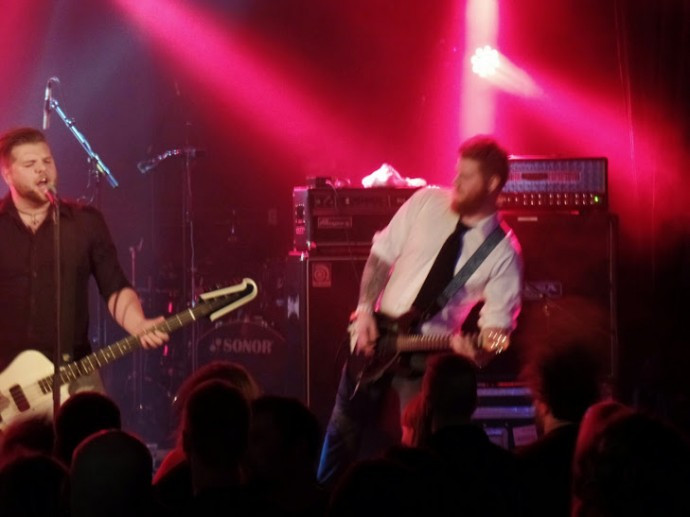 The day got unequivocal when Carpe Noctem took the stage. Islander quite accurately called them “ravaging and riveting” last September (here). Their set at Eistnaflug was black metal leavened by a hefty dose of death, with an almost gothic presentation that, rather than cheesiness, lent the proceedings gravitas. 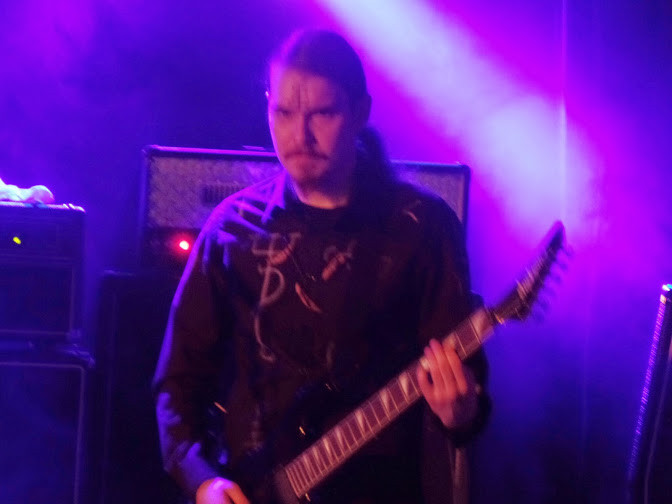 Skepna is the perfect accompaniment to a backyard summer barbecue. Solstafir’s drummer included them in his 2013 year-end list for NCS. As he explained it, one of HAM’s founding members started Skepna with the intent of being a garage rock band. And that’s what it is.

Half of Malignant Mist was familiar from Azoic, but the bleach-blond singer, Ingólfur Ólafsson, was new to me. I would soon develop a Pavlovian response to that hair, though, as it heralded some of the most enjoyable sets of the weekend. Malignant Mist plated a searing jambalaya filled with all kinds of chunky sub-genre goodies. Cliches about second helpings apply. 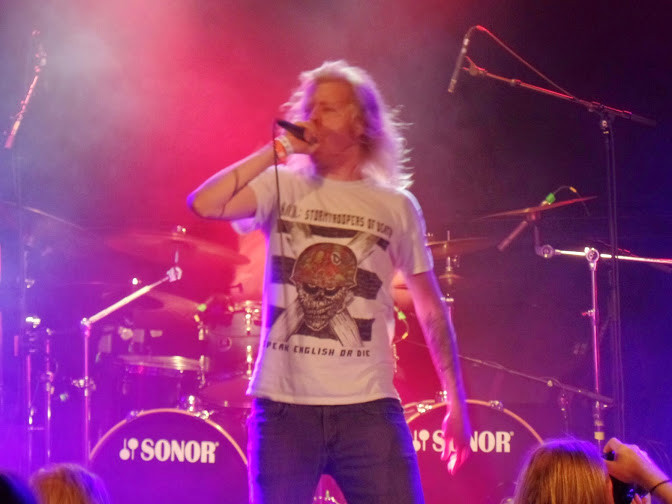 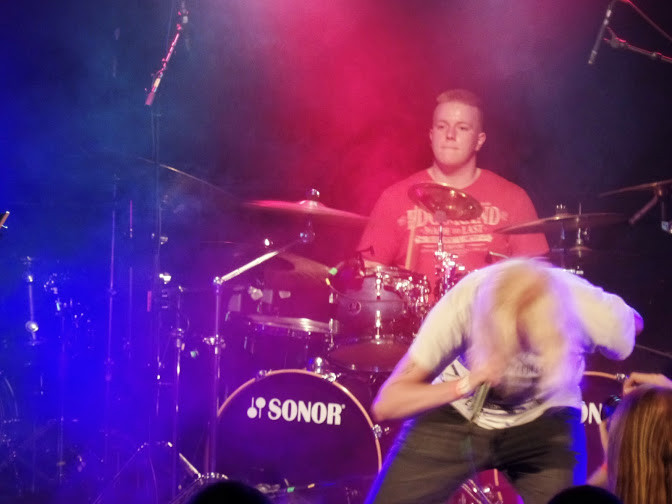 Are you getting stylistic whiplash yet? About this time on Thursday I was, and the next band only made it worse. Islander called Strigaskór Nr. 42’s 2013 album, Armadillo, “an exuberant burst of creativity, and it often sounds like the inmates are in charge of the asylum.”

A trip to the supermarket indicated that the band’s name means “Size 42 Sneakers,” and the music was as playful as these clues indicate. But aggressive riffs and a heavy, ball-swinging low end balanced the quirkiness. Hella fun. 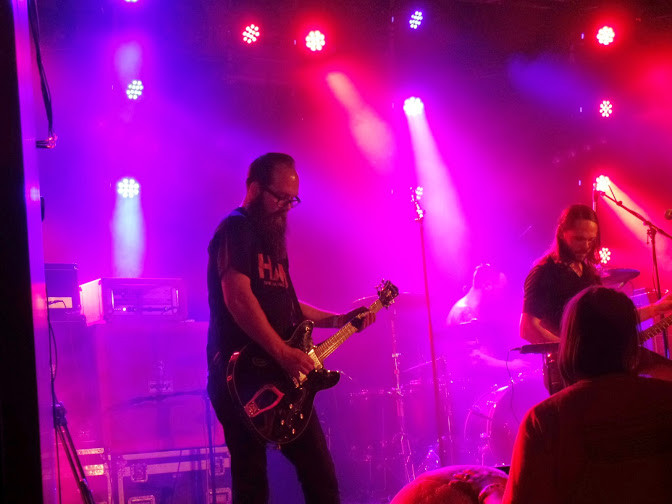 This was my third time seeing Angist, and they never sounded better. At smaller venues in Reykjavik, I always felt that their dense death metal sound was too big for the space; at the festival venue, Egilsbuð, the music unfolded to reveal details lost in the mud of club show sound systems. They’ve progressed since recording Circle of Suffering, and it’s a shame that they are being grown ups and only proceeding with the new album as money becomes available. It’s already on my list of top albums for whatever year it finally comes out. 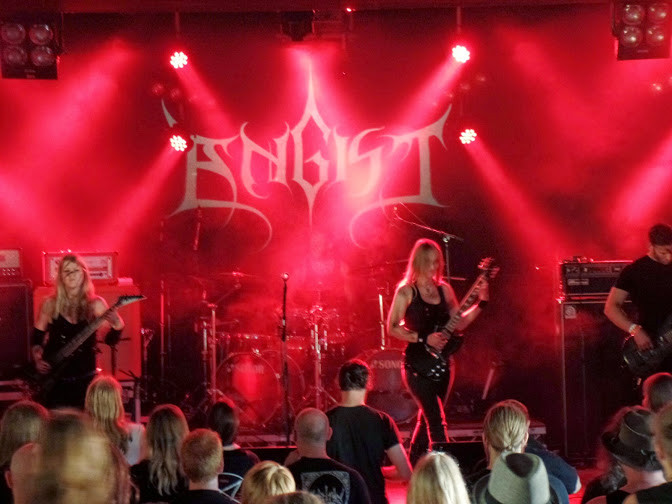 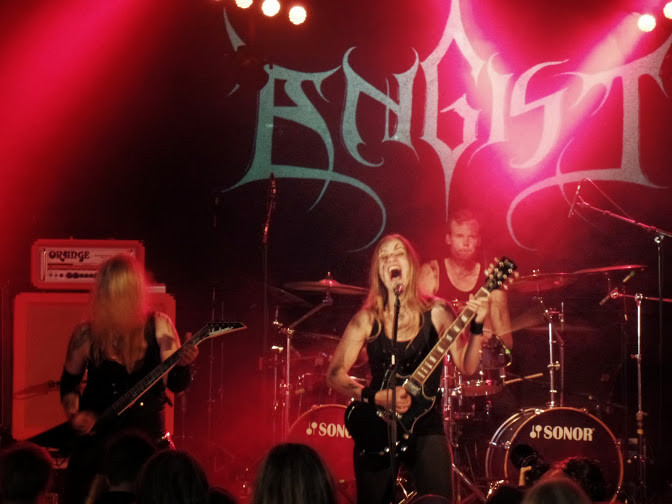 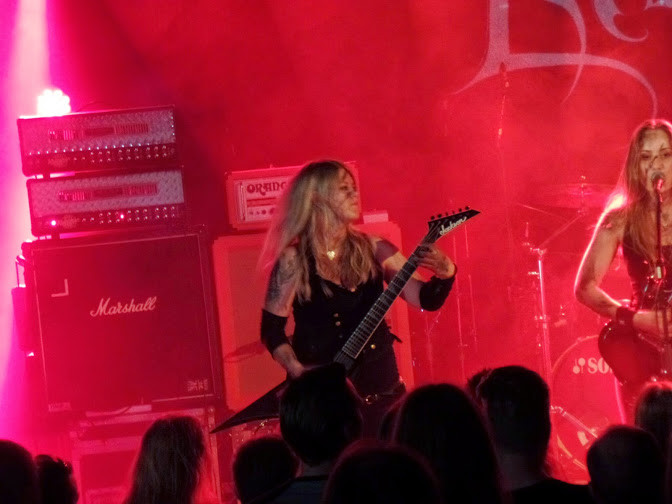 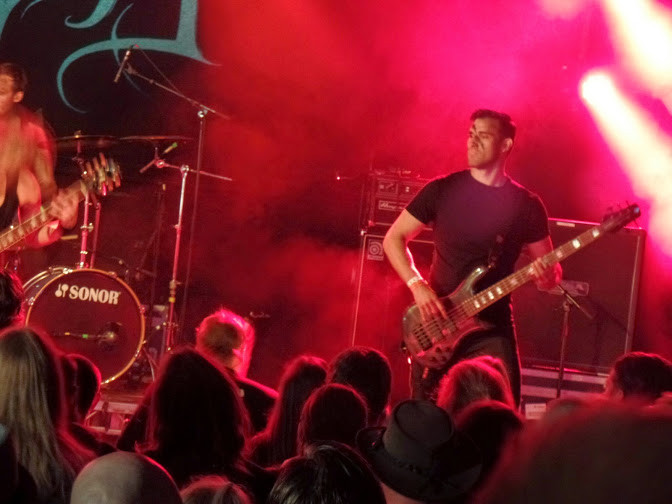 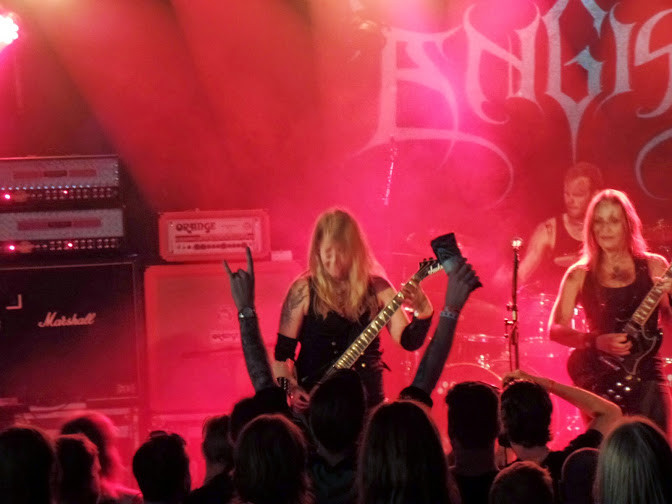 Eistnaflug is as famous for its bonhomie as its music. As you walk around the festival, you notice a lot of hugging. You also notice that people tend to press full beer cans into your empty hands. This is especially humanitarian because a glass of beer inside the venue costs $9. I present this cultural aside by way of excuse for having missed Innvortis. I’m told it’s a punk band with Skálmöld’s bassist on guitar. But I was standing outside, chatting pleasantly with new friends, Tuborg in hand. 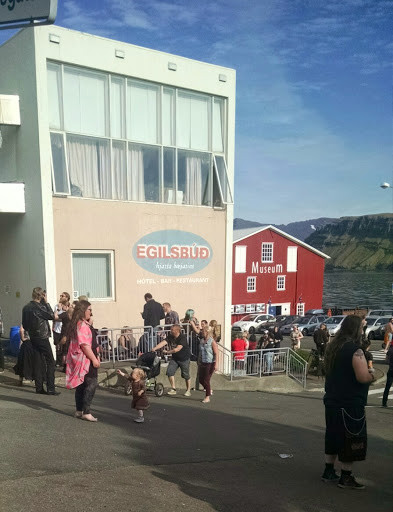 The first time I saw Momentum I felt like a physicist reading Relativity in 1920. The world as I knew it was upended by barbed riffs that took all the wrong turns and songs that ended upside down. Like particles and waves, they were both crushingly heavy and melodically clean-sung. I’ve listened the hell out of their Neurosis-ish album Fixation, At Rest, so their Eistnaflug set was not the same mindfuck as that first experience, but it was still worth a trip to Iceland.

(Editor’s note: Last Friday, Dark Essence Records announced that it had inked a deal with Momentum and are preparing to release the band’s second full-length album, The Freak Is Alive. The title track is below.) 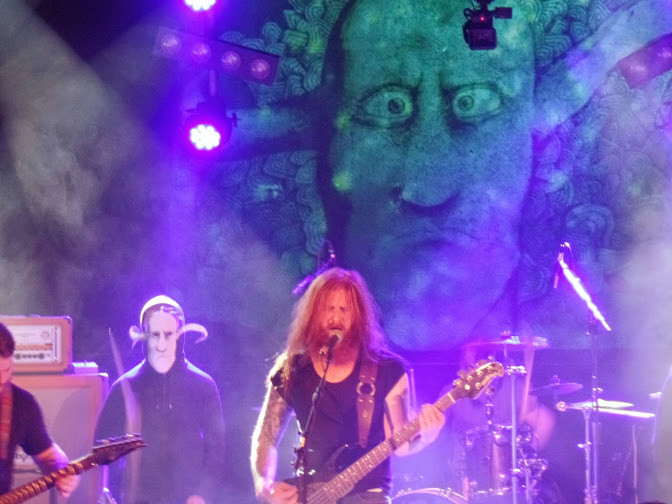 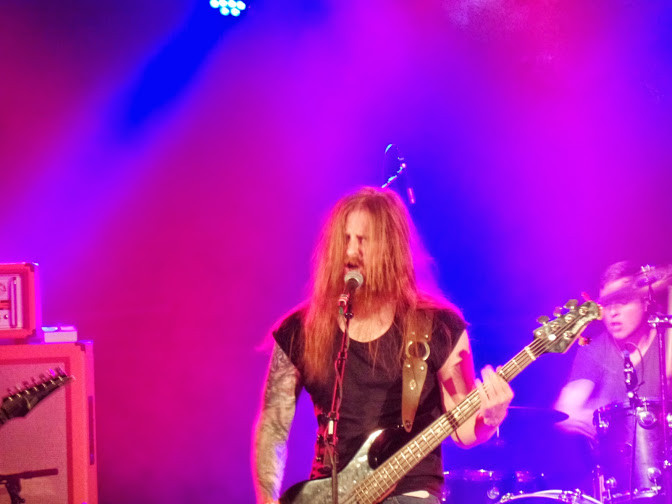 If Momentum is relativity theory, Sign (pronounced seeg) is time travel. Frontman Ragnar Zolberg has devoted his prodigious talent to recreating a style of music long forgotten by most of the world. Although many might say it’s best forgotten, Sign does it as well as anyone else did back in the days when Skid Row was the epitome of cool. 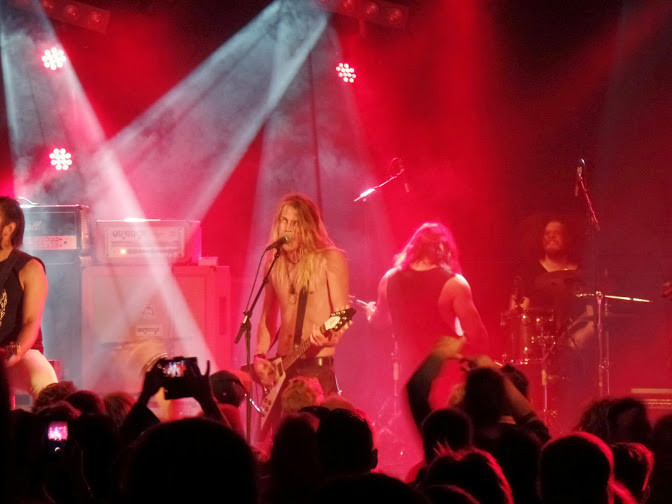 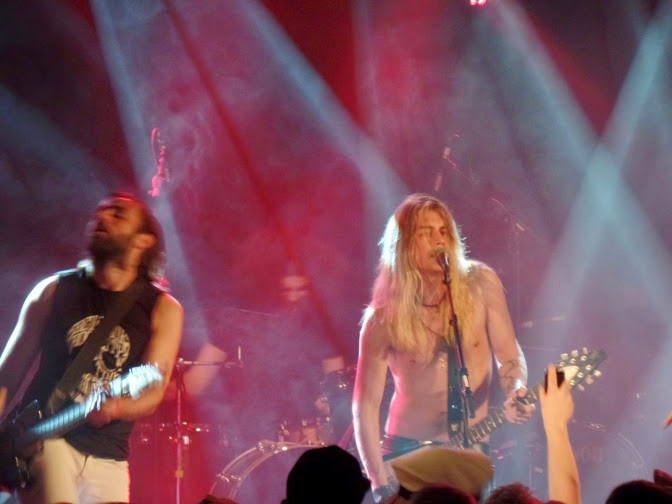 The air in the packed venue was starting to get a little chewy with the mosh-pit sweat of a dense crowd of campers. I had consumed nothing but skyr and beer for at least 14 hours, during which time I watched ten progressively lengthy sets. Gasping for air, I went outside, where a friend informed me that my luggage, lost since Monday, had finally arrived. Consoling myself that I had already seen At the Gates, I ran to shower and put on clean clothes before hiking up the hill above town for some fresh air. On the campground I met some friendly folks who pressed a Tuborg into my hand, and we talked until the midnight dusk became dawn again. 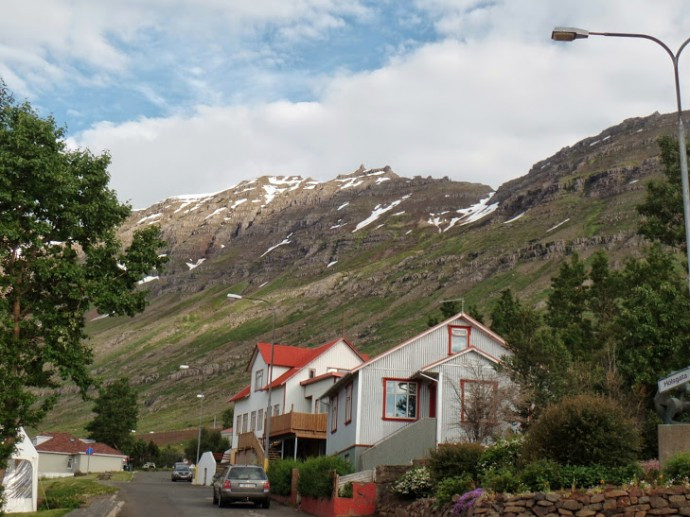 instead of At the Gates…

It was only the next day that I realized I’ve actually seen In Flames. And now that I have confessed to both confusing the leaves on the Gothenburg shamrock and a high school crush on Sebastian Bach, I think I’d best quit. Anyway, I might be a dork, but Eistnaflug is as good as festivals get.

One Response to “AN EISTNAFLUG REPORT: PART 1”