Rumor has it there’s some holiday tomorrow, with lots of talk about happy and jolly. I’m not feeling it myself. I’m more in the mood for head wreckage. I found these new songs over the last 24 hours that do the job nicely — music that’s full of power and passion, and no joy.

Last month we had the pleasure of premiering (here) a new song by a Finnish horde named Devouring Star from their forthcoming debut album Through Lung and Heart, on the Daemon Worship label. Since then two more songs from the album have been revealed, the latest one just this morning. Austin Weber described the song we premiered as “an apocalyptic ode to true worshipers of the dark arts, teeming with sourness and bitter pain and delivering a bludgeoning and a sense of horror comparable to few.” The new song is no less decimating.

“The Dreaming Tombs” is an unmitigated onslaught of percussive hammer blows, howling riffs, and wretched vocal extremity. The music swirls like a cyclonic vortex, broken in places by a massive doom-drenched stomps. It’s bleak, black, brutally ferocious music that very effectively creates an atmosphere of calamity and collapse.

Below, I’ve embedded not only the Soundcloud player for the new song but also a Bandcamp player that includes all three songs from the album that have premiered to date. Through Lung and Heart will be released on February 1, 2015, and can be pre-ordered on CD and vinyl via the following Bandcamp link:

“Oh, hear the gospel of the slit throat;
How all words vanish in complete harmony.
And they speak in perfect silence.
More than was ever given for them to pronounce.”

Until yesterday I had never heard of the one-man Polish band Stworz, but then I saw that Tr00 Nate had ranked their 2014 album at No. 12 on his year-end list. That peaked my interest, and then in short order I saw on Facebook an enthusiastic recommendation by Austin Lunn (Panopticon) for another Polish band named Kres, whose debut album includes vocals by the sole member of Stworz (Wojsław), who is also involved in the band Wędrujący Wiatr (their debut album was included on Austin Lunn’s 2013 year-end list at NCS). As far as I can tell from my researches, Kres is the new project of Unvit (Uniewita), a former member of the Polish band Fall.

The new album will be released by Werewolf Promotion, although I’m not sure of the album’s name or its precise release date. But I think the album will be worth hearing based on one song that’s up on YouTube. The song’s name is “Na krawędziach nosy”. It pairs grinding, sludge-filled low-end riffs with the ripple of guitar melody, explosive torrents of super-heated passion with hard-rocking jams, soaring tremolo chords with melancholy arpeggios. The vocals are bursting with emotion, as befits the intensity of the music. A really excellent introduction to an album that’s suddenly leaped onto my highly anticipated list for the new year. 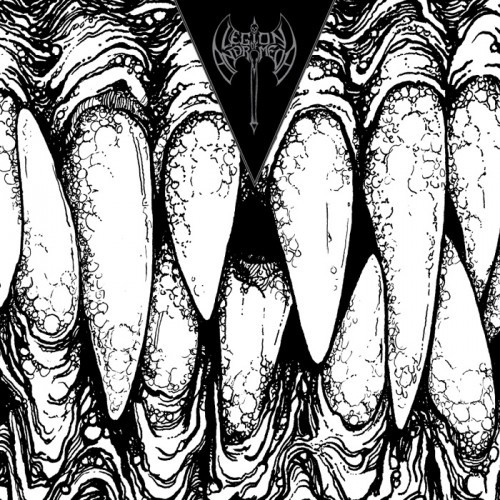 Iron Scorn is the title of the debut album by a band named Legion of Andromeda whose members consist of Japanese instrumentalist “M” and Italian vocalist “R“. It was recorded and mixed in Chicago by Steve Albini (Neurosis, High On Fire, Nirvana) and features toothsome artwork by Tony Roberts (Conan, Electric Wizard, Unearthly Trance). It’s projected for vinyl release on February 20, 2015, by At War With False Noise in the EU and Unholy Anarchy in the US.

The band identify such diverse acts as Big Black, Suicide, Godflesh, Ildjarn, Swans, Khanate, VON, and Pan Sonic as their influences. Two songs from the album are currently streaming on Bandcamp, “Overlord of Thunder” and “Scourge of Pestilence”. Both of them are corrosive loops of ugly, squalling noise, completely caked in distortion and infiltrated with pulsating streams of dissonance. Monstrously tyrannical vocals utter unfathomable and unhinged proclamations over the groaning, moaning, jackhammering riffs and machine-generated punishment. It resembles a remorseless urban demolition project that chose not to evacuate the residents before hammering their towers to smithereens. 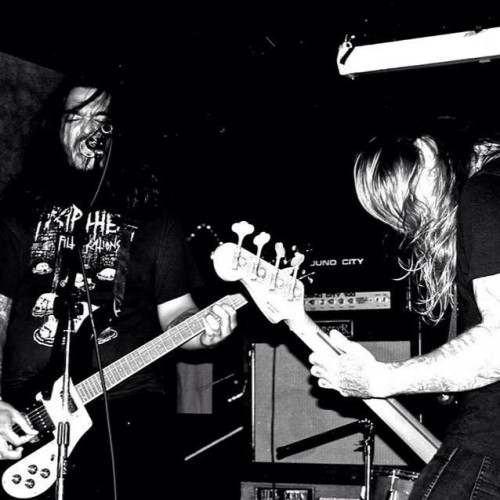 Worship are from Salinas, California. They released an EP in 2013 named Book of Beasts (a free download on Bandcamp), and they’ve apparently now recorded a debut album — and I know this because the band messaged us about a new song from the album named “Under the Black Sun”. I like it.

There’s an alien quality to the slow, dissonant opening of the song, in which huge sludge-filled riffs do the dirty work, but that doom-drenched beginning is followed by an accelerated ass-kicking, just as fuzz-bombed in its sound but considerably more destructive. It’s a pulverizing piece of music, part sludge, part crust, and loaded with venom.

I’m not sure about the title of the new album or when it will be released, but I’ll add that info here when I find out. In the meantime, check out these links — and listen to the song below.