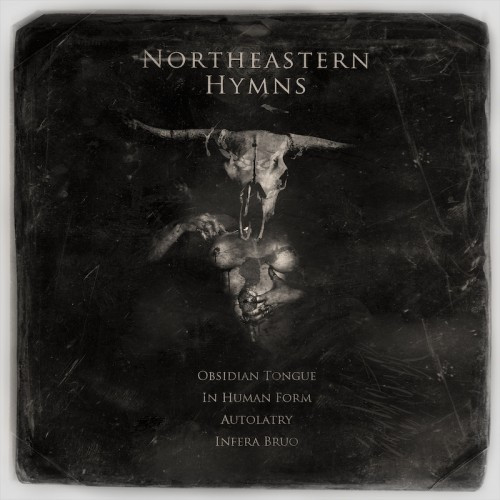 Three of the bands — Obsidian Tongue, In Human Form, and Infera Bruo — make their homes in Massachusetts, while the fourth — Autolatry — hail from Connecticut. In each case, these long songs mark the bands’ first recorded output since albums that appeared in 2013. In each case, there is a connection to the genre of black metal, but other musical elements are more dominant. And together, they provide a tremendously multi-faceted and tremendously engaging array of musical creativity and instrumental talent.

Under the banner of Obsidian Tongue vocalist/guitarist Brendan Hayter and drummer Greg Murphy have produced two albums to date, 2012’s Volume I: Subradiant Architecture and 2013’s A Nest of Ravens In the Throat of Time. Their 15-minute song for the split is entitled “The Lakeside Redemption”.

It’s a majestic, emotionally powerful piece of atmospheric music that fans of Agalloch should find especially appealing. It moves from storm waves of raking riffs, rippling melody, and pounding percussion to softer, almost ethereal passages of reverberating guitars and slow, meditative interludes that glisten like sunlight on a forest stream. Harsh vocals that slash and scar like an ice storm share time with strong clean vocals, and the song includes affecting, melancholy melodies that make the music memorable. A great follow-up to the band’s impressive 2013 album.

Along with a couple of splits and an EP, In Human Form’s last release was their 2013 debut album Earthen Urn (reviewed here). Their track on the split, “The Illusion of Intellect”, provides an immediate contrast with Obsidian Tongue’s opener, with a bright, entrancing guitar duet with cool jazz overtones consuming the first two minutes. And then all the instruments come in, and the music transforms into a prog-metal romp that verges on the experimental.

While the vocalist gargles and rasps the lyrics (sometimes transitioning into the braying of spoken words), the rest of the band take you on a roller-coaster ride of rapidly changing tempos and time signatures, and the music includes a variety of small touches (including what sounds like a flute or other wind instrument) that keep the listener off-balance — but thoroughly engaged at all times. It’s a head-spinning rush of kaleidoscopic sounds that takes more than one listen to fully appreciate.

Autolatry’s last release was their second album, 2013’s Native (reviewed here). It was a diverse array of music that revealed a band full of instrumental talent and bursting with musical ideas. “Brother” is a further sign of the band’s creative exuberance and an absolute joy to hear.

On this outing the connection to black metal is only a slight one — perhaps a certain raw jaggedness in the throat-abrading vocals (though they wouldn’t be out of place in a hardcore band either) and bursts of blasting drums and tremolo’d riffing. But in the main, the atmosphere of the song feels like an explosion of life and light (albeit with a grinding heaviness as well), and the instrumental intricacy is more in line with a prog-metal jam.

And I do mean “explosion”. After the slow solo guitar strumming in the introduction, the energetic intensity of the song jumps into the red zone and drives hard all the way to the finish. And it’s a wonderful display of both instrumental mastery and song-craft — the music is complex  but without losing the thread of the melody or the flow of the song. Somehow, 15 minutes goes back in the blink of an eye. I never felt impatient nor did I begin to lose interest, In fact, the first thing I wanted to do after the song ended was play it again.

We last heard from Infera Bruo in 2013, when they released their “debut” album Desolate Unknown (which followed a 30+ minute 2011 demo). Their song for the split, “Reversing Tides”, begins with flashing acoustic guitar and a building shrill of feedback that paves the way for slashing riffs and galloping percussion. The song is a balanced mix of black metal and progressive metal, melding venomous intensity with a richly textured tapestry of instrumental color and emotional variety.

Like the other brans on this split, Infera Bruo’s members have impressive instrumental skill, and they use it to excellent effect in “Reversing Tides”. They also have a knack for intelligently juxtaposing the soft and the heavy, the light and the dark. The song takes hold of your mind and carries it away, as if transported by larks in flight. But the song is also plenty heavy and drives plenty hard.

Northeastern Hymns is available today as a digital download via Bandcamp (see the first link below), and a limited cassette release is projected for April through Acephale Winter Productions.