Some days you wake up and you want some soothing, pretty music. I’m talking about soothing, pretty METAL music, because obviously I’m not a completely tasteless moron who left his nuts at the checkout counter of Abercrombie & Fitch. But some days you wake up in the mood for filth. You just want to bathe yourself in a slurry of warm fecal matter, pus, and fresh afterbirth. You know what I’m talking about, so don’t deny it.

Well, that’s how I felt this morning. And while I was waiting for the bathtub to fill and lighting the scented corpse-flower candles, I went looking for some appropriate musical accompaniment. Here’s what I found.

This morning Profound Lore posted that cover art up there, the one with a photo that looks very much like what’s filling up in my bathtub, except with bones. I don’t like bones in my bath because sometimes they get stuck in my hidey-hole as I’m lowering myself into the broth.

Profound Lore says it’s the cover of an album named Suicide Euphoria by a Philadelphia band named Pissgrave that’s going to be released in August. They say Pissgrave are a “depraved violent raw death metal band”. That sounded appetizing, given my morning yearning for filth, so I went in search of some Pissgrave music.

There’s nothing streaming from Suicide Euphoria yet, but I did find that last year Graceless Recordings released a debut demo by Pissgrave on tape. The artwork for that thing looks even more gross than the cover for the new album, which I took to be a good sign: 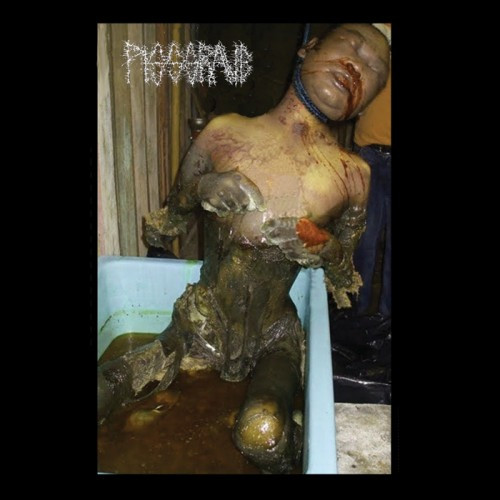 I also found one song from the demo on Bandcamp, where of course it isn’t available for digital download, because apparently digital is to true filth as detergent is to your shit-stained underoos — they just don’t mix very amicably, and why would you want to mix them?

The one song is Track 7 from the demo, “Sadistic Telepathy”. Eviscerating, grime-caked riffs; spleen-rupturing drumwork; rancid, monstrous vocals; gruesome atmosphere — what’s not to like? This is so deliciously disgusting that I may drink my special bath fluids instead of immersing myself in them. 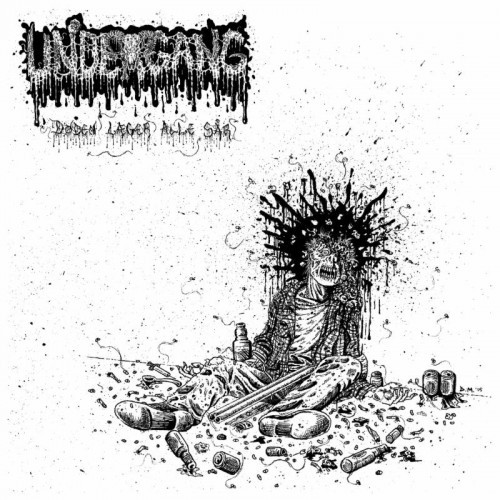 Back in November 2012, my friend MaxR from Metal Bandcamp wrote a review that I posted on our site (here) of a debut album named Indhentet Af Døden by his Danish countrymen Undergang. He used words like “rotten, filthy, disgusting, nasty”. That reads like the menu at a restaurant where I’d like to get my breakfast after I have my bath.

It turns out that Undergang have a new album coming out July 10 on Dark Descent entitled Døden læger alle sår. Almost two weeks ago Noisey premiered a song from the album named “Kogt i Blod”, and I finally listened to it this morning on Bandcamp.

This has got the filth coming out of all the orifices. At first it’s slower than the flow of coagulating blood, a death/doom horror show in progress — and then it accelerates into a grisly juggernaut of death metal malevolence. You want gruesome, buzz-saw, down-tuned riffs? You want grinding bass lines and galloping/knee-capping percussion? You want abyssal vocal terror? Well, duh, of course you do, and Undergang will fix you right up. Fuckin’ Grade-A old-school mayhem here.

You can pre-order the album now on Bandcamp (link below).

While I was over at the Dark Descent Bandcamp page listening to that Undergang track I noticed a listing for a rough mix of a song called “Torn Forever From the Light” by a band named Ruinous that debuted on June 2. Ruinous features guitarist Alex Bouks (ex-Incantation, ex-Goreaphobia, Funebrarum), drummer Shawn Eldridge (Disma, Fulebrarum), bass-player Jay Lawrence (ex-Goreaphobia), and vocalist/guitarist Matt Madeiros. That collection of names is pretty much a guarantee of filth, and so I listened to the new track.

This song punched all my filth pleasure centers, as well as my kidneys. I think I have a collapsed lung now, too. It’s crushing and dismal. It includes some sickeningly sweet guitar solos. It has riffs that are infectious (and I mean that in both senses of the word). It has vocals that range from unhinged shrieks to tyrannical roars. It’s overpowering, cleverly constructed, and viciously executed.

Dark Descent says that Ruinous will be recording their debut full-length this summer. Highly anticipated, like what’s waiting for me in my bathtub.

“Torn Forever From the Light” is a name-your-price download on Bandcamp, so what the fuck are you waiting for? 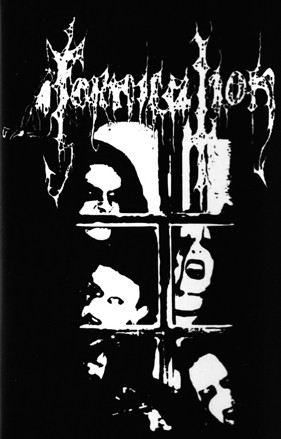 Fornication are a French band whose releases go back to 1999. Some friend of mine on Facebook recently put up a link to a Fornication song named “Disabled” that proved to be a nice helping of black metal filth. It’s one of five previously unreleased tracks recorded in 2002 that now appear on a self-titled EP released earlier this year (on tape, of course) by Battlesk’rs Productions (www.battleskrs.com).

This is a cool fuckin’ song — mid-paced shrieking black metal that’s heavy as lead, thoroughly evil in its atmosphere, and as catchy as ebola (but less likely to make you bleed out from your hidey-hole).

The Fornication EP is being exclusively distributed by a distro named Necrocosm: 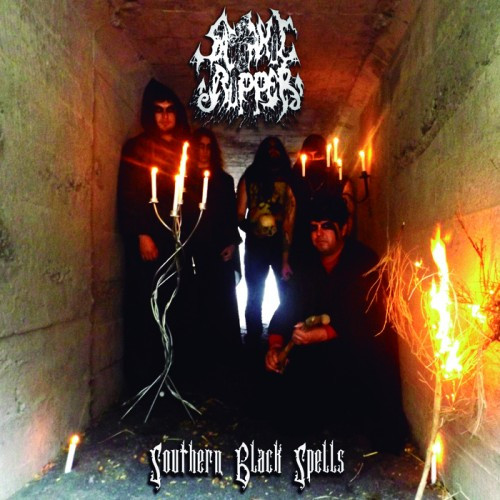 Satanic Ripper are from Chile. Last year they released a debut album on CD named Southern Black Spells via Apocalyptic Productions. On June 22, Blood Harvest Records will release a vinyl edition of the album, and that announcement is what drew me to their music.

The whole album is available for streaming and download on the Blood Harvest Bandcamp page, where the vinyl can also be ordered. I intend to listen to the entire album, but this morning, in my frenzied exploration for filth, I only got as far as the album’s first track, “The Flight of the Witch”. I had to sit through a minute and a half of eerie, quasi-ambient intro music before getting to the goods — but the goods are good.

And by “good” I mean black thrashing bedlam that lives up to the band’s name. The music whips like a tornado around your head, driven by chaotic riff-swarms and drumming that lives in the red zone. When the song’s rhythm transitions about mid-way through into a rocking beat I thought my head was going to come off, and the guitar solo that erupted after that was so maniacal that I began frothing at the mouth (figuratively speaking).  And then there’s a bone-grinding bass solo followed by a section that crawls like a fat maggot, something more in the vein of death/doom than what preceded it.

In a nutshell, this is an excellent, dynamic piece of filth (I forgot to mention that the vocals are rancid enough to curdle milk). 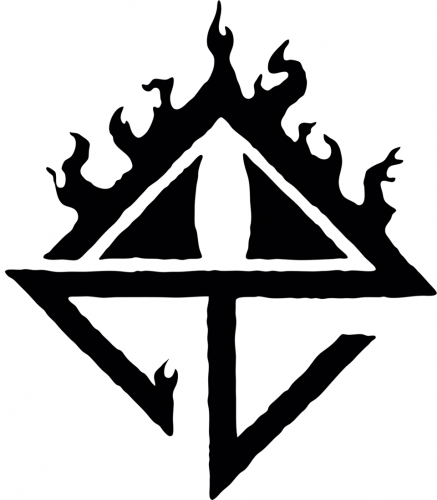 Just as I was about to wrap up this round-up I noticed an exciting piece of news from the world of filth that seemed like a fitting conclusion to this post: the Swedish black metal group Craft have now signed to Season of Mist, which will be releasing their forthcoming fifth album. If that doesn’t make you want to take off your clothes and dive into the nearest cesspool, I don’t know what would. I’ve got my pants off already. Or maybe you’d just like to commit murder.

8 Responses to “YOUR FILTH FOR THE DAY: PISSGRAVE, UNDERGANG, RUINOUS, FORNICATION, SATANIC RIPPER — AND SOME NEWS ABOUT CRAFT”