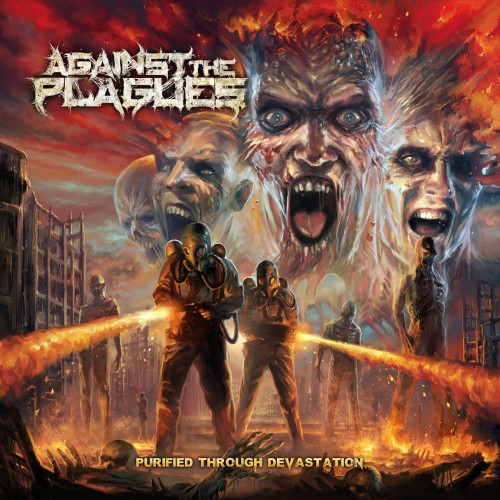 (Andy Synn reviews the new album by Against the Plagues.)

Here in the great and glorious republic of No Clean Singing we’ve been watching the career of Chicago-based multi-national metallers Against the Plagues with an appraising eye for some time now. Though their debut album (so good they named it, and released it, twice!) didn’t exactly set the world on fire, there was still enough potential inherent in it to ensure that the group deserved a second look when the time finally came for them to release their follow-up The Quaternion (reviewed HERE), which was most definitely a major step-up for the group (if not exactly a step outside their comfort zone).

However, not long after the EP’s release the band’s line-up effectively imploded, leaving drummer Varyen as the last man standing in the aftermath. Thankfully, he refused to give up on things and, over the course of the next three years, recruited an entirely new line-up in order to work on what would eventually become the group’s second full-length album proper, Purified Through Devastation.

Now, some may feel slightly short-changed by the fact that Purified Through Devastation re-records the entirety of The Quaternion (all four tracks) – which would be wholly understandable, to an extent. However, I’d like to reassure those people that the versions present on this album far exceed those originally put out on the EP, as the entire album itself positively crackles with a real sense of vitality and energy over and above anything the band have done before.

Granted, it doesn’t exactly break the mould, or reinvent the wheel… or whatever other cliché you might be thinking of… but then again, it doesn’t really have to. Against the Plagues are clearly more focussed on being (to paraphrase a certain Canucklehead) “the best there is at what they do”.

And while they’re not quite there yet… they’re definitely on their way. 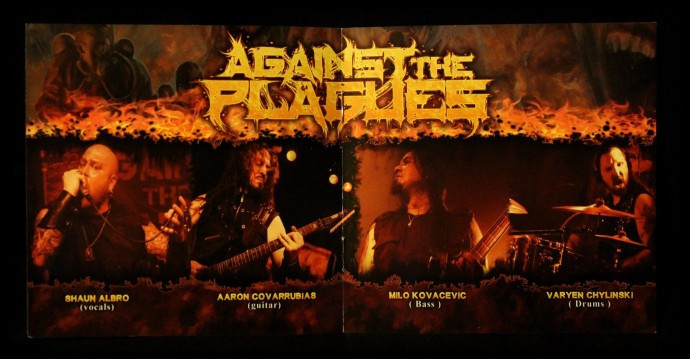 The basis of the band’s sound is largely still the same – hefty doses of Morbid Angel and Immolation worship mixed in with lashings of blackened melody and keyboards reminiscent of mid-period Dimmu Borgir and latter-day Old Man’s Child – though this time around the punchier, more powerful production and better integration of the keys (employed more for atmosphere than symphonic bluster) makes for a far more cohesive and impressive listening experience than the often uneven mix-and-match songwriting found on their first album.

Opener “Man’s Modern World” (originally previewed at this very site late last year) blasts its way out of the gate in a frenzy of machine-gun drum work and big, bruising (subtly melodic) Death Metal riffage, with Shaun Albro’s formidable growl/snarl delivering all the commanding venom and fury the music requires.

The production, though clean, has some real heft to it, enhancing and illuminating every bassy twang, juddering kick pattern, and purpose-built, high-yield riff with a suitably crisp sense of clarity and depth, and although the song runs a hair over seven minutes in length, it never seems bloated or indulgent as it whips past with barely a pause for breath.

“All Flesh Had Corrupted”, the first truly “new” song on here, has a real modern-day Vader/Immolation vibe to it, with just enough tweaks to make it feel refreshing and invigorating, and packs an impressive amount of heavy, hook-filled riffery into its 4:58 run-time.

The reworked/re-recorded “Praetorian Icon” is a blackened, trem-filled blast-fest of epic proportions laced with numerous melodic and subtly disharmonic touches, including a coldly brooding mid-section which adds a welcome touch of variety to the song’s tactically-precise ballistic assault.

The menacing mid-paced chuggery, contorted tremolo lines, and perpetual, rolling drum work of “Theokratia” brings back some of that Puritanical-era Dimmu Borgir menace that the band had largely stripped away on The Quaternion, deploying some frankly irresistible (and punishing) staccato hooks in the process.

The whiplash-inducing assault of “Extermination Event” (the album’s shortest, and perhaps simplest, song) lives and dies by the strength of its razor-sharp, titanium-clad riffs and massive, shamelessly graphic hooks, providing a pleasantly direct shot of deathly metallic adrenaline to your system – although the somewhat throw-away interlude track “Falling Further” which follows it does sap the album’s momentum somewhat.

Thankfully, the lurching, Immolation-esque “Enblightened” is up next, providing one of the downright heaviest (and best) cuts on the album – which is certainly saying something, as this is far from a lightweight collection of tracks in the first place. It’s an incredibly intense listening experience, and one that’s bolstered by some stunningly aggressive salvos of blackened venom, along with an undeniable ear for darkly seditious melody.

The whole ungodly affair concludes with the chattering, gatling-gun riffage and bombastic drumming of “Enemy Herein”, allowing the band one final opportunity to unleash their particular brand of hyper-modern, hyper-intense Death Metal devastation with all the implacable power and pinpoint accuracy that the band have become known for.

Although you could argue that the band’s sound is not the most original in the world, it would be a mistake to write them off because of that, as it’s clear the quintet are doing their very best to make this sound their own, twisting, tweaking, and refining it to suit their own particular needs and vision, regardless of what others might think.

And I tip my hat to them for it. Not every band has to “realign the paradigm” (or whatever buzzword-y terminology we’re using these days). Sometimes it’s enough to just be very, very good.

And Against the Plagues are proving themselves to be very, very good indeed.

Purified Through Devastation was released by Non Serviam Records on December 18 and can be acquired here or here. The album features cover art by Pär Olofsson.

2 Responses to “AGAINST THE PLAGUES: “PURIFIED THROUGH DEVASTATION””