Apex Predator-Easy Meat hit almost exactly one year ago, and DGR reviewed the album the next month, beginning with a mythic story that had an anti-climactic finish as a shamanic figure uttered after a convulsive trance: “Napalm Death are an important band”. And then he came full circle at the end of that review: 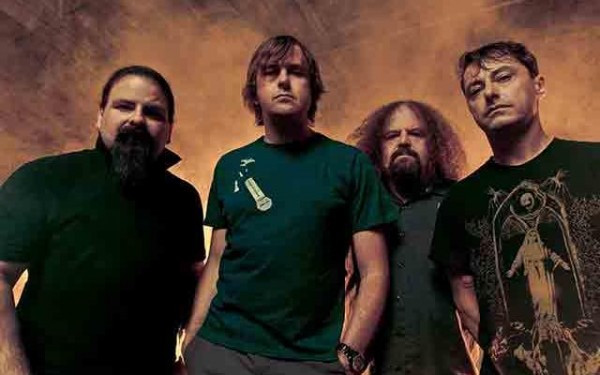 “Napalm Death are an important band and Apex Predator keeps them as relevant as ever. They’ve once again drawn from the shitshow that we refer to as society and fueled another hugely angry album, one that is a high-speed assault that makes you feel like a piece of shit for not doing anything about it. Yes, Napalm Death have been doing this forever, but the fact that they still can — and do so with ease — means that they’re going to remain at the top of their genre for a long time to come. As long as they do, it will be some comfort knowing that there is still some honest fury left in metal.”

DGR also remarked, quite correctly, that there’s a lot of infectious music on the album, as well as a lot of honest fury. And he and I are on the same page about the one that’s most infectious. I’ll let him tell it:

“‘How The Years Condemn’, one of the songs that was released as a teaser before Apex Predator hit, has a bit of a metalcore tinge, given its heavy punk-rock-derived guitar part. The song’s driving guitars have an up-and-down rhythm and a bobbing drum section that are amped up high on the heaviness scale and it results in an insanely catchy deathgrind slab. It’s hard not to get excited during the opening section as the band roars, ‘We are not invincible/Nor are we indestructible!’”

A lot of us here at NCS are big fans of this Seattle-based band, and some of us have become friends with folks in the band as well. This doesn’t create a conflict of interest — it was more a matter of our affection for the people just providing one more reason to rally behind the music, which was already a rallying cry.

Austin Weber reviewed the band’s 2015 album Regression for us, and concluded this way:

Even with their first full-length release, Theories are already at a level few grind bands reach, which makes it scary to think what new kind of bestial insanity they may reach with further evolution. Regression is not only a superbly performed assault on your senses, but more importantly, one with more substance and memorable moments than you will find on most records within the genre. Highly recommended.

And our former NCS comrade BadWolf also penned some enthusiastic words about the record over at Invisible Oranges, including these:

The ethos “more is more” informs Theories’ take on the genre: more guitar solos per song, more disturbing vocal samples, more ignorant breakdowns than the typical-blast-then-pause grind record. Scott Hull of Pig Destroyer and Agoraphobic Nosebleed mixed the album, and punched every instrument into the red. The bass sounds like a guitar and the guitar sounds like the death squeal of some huge cybernetically enhanced boar. Drummer Joe “Grindo” Axler’s snare drums sound as if they could break coconuts, and his cymbals sound like they’re made of Gillette razorblades. Even by grind standards it’s an intense listening experience.

Yes, it definitely is intense — and memorable. And once again, DGR and I are in agreement that “Shame” is not only one of the stand-out tracks on Regression, it’s also one of the most infectious of the year.

P.S. Theories are now on tour in the U.S. with Decapitated and Black Breath. To get the latest on the schedule, go here:

We praised the living shit out of the 2015 album by these Polish grind veterans — The Insolent. KevinP named it one of the albums of the month for last May (here), calling it a “true gem”. Dan Barkasi named it to his own list of “Essential Entries” for the same month. I gushed about their performance at Maryland Deathfest the same month. And DGR gave it these words of acclaim in his review:

“The Insolent is high-minded viciousness, an album that hints at a bunch of different things happening under the surface but on top is like three trains all destined for collision — and a huge chunk of The Insolent is that moment of impact.”

“It’s a furious burn that then makes a jarring turn for the amibent and weird, before going back to burning and then finally smoldering until the end of its run.”

And once again, both DGR and I agree (I guess one of us must now be considering a psychiatric consultation) that The Insolent is also home to one of the year’s most infectious extreme tracks: “Used To”: