This is one of the songs that reared its head after I had originally planned to post this collection. Actually, it didn’t just rear its head — it kicked down the door, busted up the furniture, and then set the place on fire. 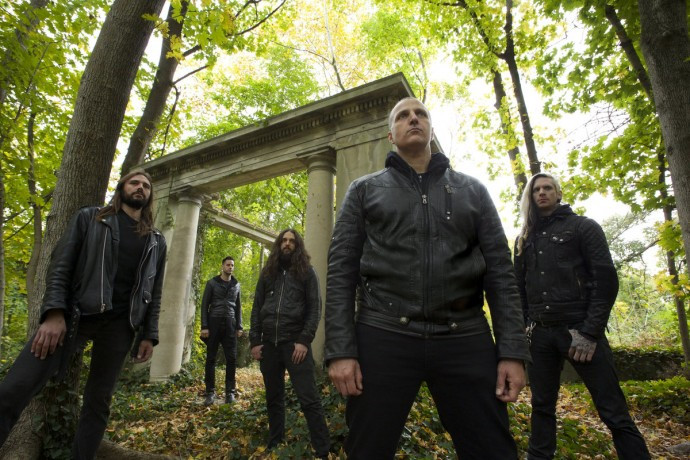 The song is “Deceiver” and it comes from the new five-track EP by Tombs, All Empires Fall, which will be released by Relapse on April 1. This band hasn’t made a misstep ever (by my lights), but I was still curious to hear what their music might sound like after the addition of Fade Kainer (Batillus, Theologian) as keyboardist and second vocalist.

Man, when the drum tumble and bass grinding begins, you can feel it straight down your spine. The serrated riffs rock like a hellish dance. The vocals are savage. The serpentine melody is searing. The whole thing is damned infectious… but mainly damned. Some interesting changes going on here, but I sure like the song. 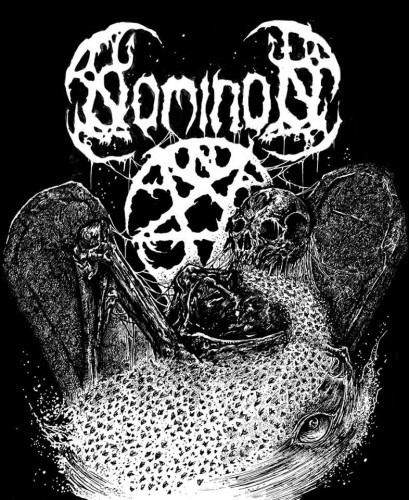 Two days ago Hexed Cemetery released a limited-edition pro-tape called Chaos in the Flesh…Live! that captures a live performance by Sweden’s Nominon at the Death Kills Festival in Stockholm, Sweden, in February 2015. It’s a 50-minute, 12-song set that ends with a cover of Motörhead’s “The Hammer”, but all I’ve heard from it (so far) are two tracks that Hexed Cemetery put on Bandcamp for streaming. Those two songs kill.

For those new to this band, they’ve been practicing their vicious art since the mid-’90s, though guitarist/bassist Juha Sulasalmi seems to be the only remaining original member. I’m also sad to say that in late December Juha announced that the band would be “on hold” indefinitely. But this music is something fierce to hold onto in the meantime — electrifying, thrashing, skull-cleaving, ferocious stuff. And the sound quality is great. Check it below, and prepare for serious neck sprain.

Chaos In the Flesh was mixed and mastered by Javi Bastard (of the excellent Graveyard) at Moontower Studio in Barcelona, Spain, and it features artwork by César Valladares. There might be other editions of the album released in the future for those who aren’t tapeheads. 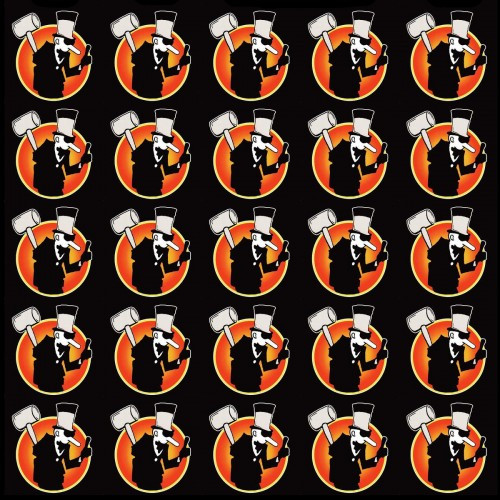 So I’m assuming that lots of people are familiar with the first two bands in this collection, and from here on I’m going to focus on bands who may be a bit more obscure, beginning with this EP from a bunch of multinational maulers named Sledgehammer.

Unlike almost everything else in this post, this music isn’t hot off the presses. Your Arsonist was originally released in 2004, but it just appeared days ago on the Bandcamp site of Holy Terror, the label run by Dwid Hellion from the almighty Integrity — and it’s downloadable for the ridiculously reasonable price of $1.

The reason it popped up on Holy Terror is that the band was a kind of hardcore supergroup featuring Dwid on vocals and — as far as I’ve been able to discover — guitarist Birger Finaut (Death Before Disco), guitarist Matt Halsberghe and bassist Hans Verbeke (both members of Liar), and drummer Tim Jult (Congress, Empathy).

That’s a lot of backstory that you really don’t need in order to appreciate the music, but I thought it was interesting. But really, all you need to know is that “Londons Burning” will kidney-punch you so much harder than The Clash did, and the rest of the songs are just as viscerally invigorating. And kidney-punching. You might see blood in your piss afterward. And for some of you what I mean by that is MORE blood. 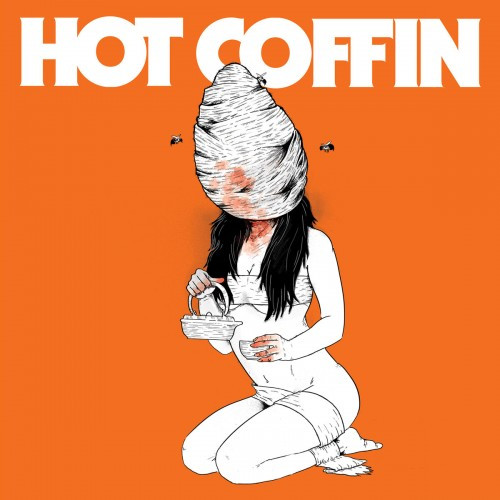 I got an e-mail about this next release and I just happened to take a look because I had the time, right then, to go right to the music (a regrettably rare occurrence, given the flood of e-mails we receive, half of which don’t have a goddamn thing to do with heavy music).

The song is “Whistle, Hawk & Spit” — and yes, I admit that name had something to do with why I went right to the music — and it’s by a Milwaukee band named Hot Coffin. It will appear on a self-titled album (their second full-length) due for release by Third Eye Industries on April 1. But the music is no fucking joke.

It will help if you have a taste for punk and hardcore, but even if you give the sideways squint-eye at that idea, I think you still might find this song cool because of the raw, fucked-up grit of the vocals and the unexpected pulses of shimmering melody that surface unexpectedly in the midst of some viscerally convulsing chords and beats. It won’t take you long to decide. 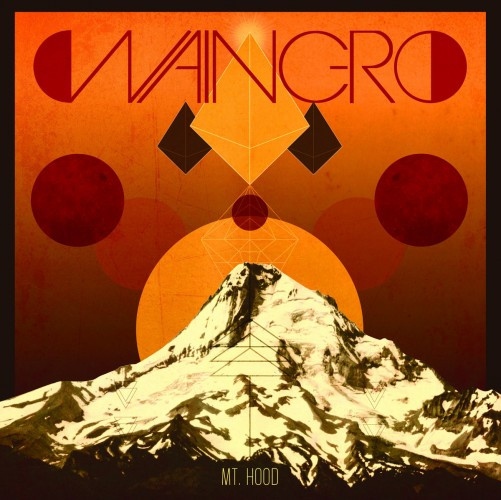 I was drawn to the following video because it was made by Brian Sepanzyk, who has made other videos we’ve featured here in the past for bands such as Baptists and Rotting Hills. His latest creation is for a song called “Black Eagle” by Vancouver’s Waingro. The song is off an album named Mt Hood, which came out last November.

Have you ever been the only sober person at a metal show where everyone around you is in varying stages of fucked-up? Have you ever been that person and gotten in a worse and worse mood because of it? Have you ever just said, fuck it, and played Russian roulette for someone else’s entertainment with a couple of dudes wearing pillowcases on their heads and finally found a reason to cheer up, just a little?

I haven’t yet listened to all of Mt Hood, but I’m leaving the Bandcamp stream below the video so I don’t forget. 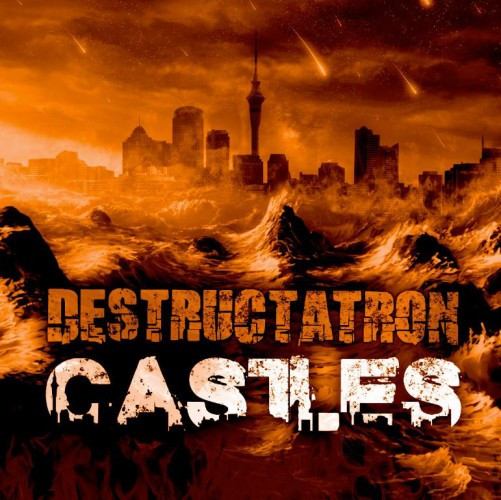 Come on! How can you resist a name like Destructatron? It sounds like the name of the worst of the Decepticons, lying long buried in the Oort Cloud, just waiting to be revived from a millennial dormancy in order to wreck havoc on Earth.

This Destructatron was unearthed somewhat closer to home, but only somewhat, since they come from New Zealand (I kid!). On the 10th of December they expelled a single named “Castles“, which seems to be their first output, and it has caught my fancy, because it applies a jackhammer to the atlas and the axis of the human cervical vertebrae, which is where the real damage can be done.

But here’s a tip from someone who’s heard the whole song: It’s more than you might think it’s going to be if you base your judgments solely on the first two minutes (though those are some nice two minutes). 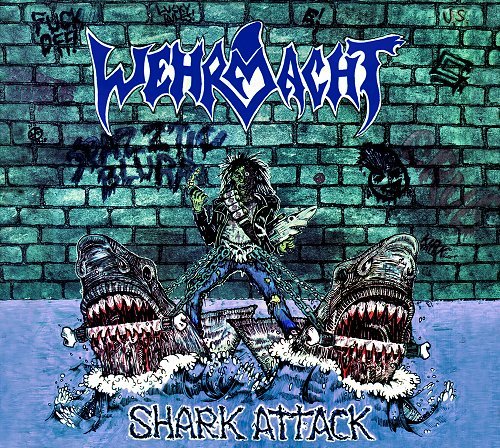 To close this round-up, I have another backward leap. At first I didn’t know it was a backward leap when I heard the song, but after further reading I figured out that “Jabberjaw” first appeared in 1987 on an album called Shark Attack.

Why did I get an e-mail about Shark Attack and “Jabberjaw” only yesterday? Because the album is being reissued on February 20 by Dead Center Productions, in remastered form, with goodies such as old photos, band liner notes, and… wait for it… lyrics translated into Russian.

After further research, I discovered that Wehrmacht is from my neck of the woods, way up here in the Pacific Northwest. Metal-Archives says they’ve been around since 1985, and their last release was a couple of live tracks on a 2014 split with Distintegrator.

But this song is from 1985, and it’s got the sort of raw, primitive, thoroughly ass-kicking sound that lots of current bands try to emulate, but this is apparently just the way it came out almost 30 years ago. Thirty years ago, motherfuckers! Thrash your fuckin’ reproductive organs off…