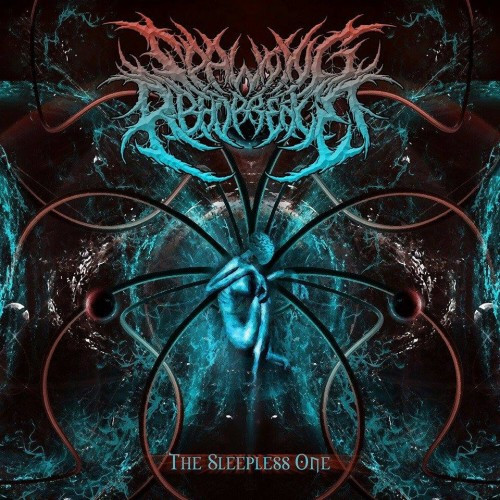 (DGR reviews the new second album by Spawning Abhorrence from Leeds in the UK.)

Spawning Abhorrence initially landed on my radar in two ways. Firstly, we premiered their song “The Writhing Rhethoric” from the band’s then-upcoming disc The Sleepless One way back in the yonder days of 2015, and two, I would later discover that a couple of the members of Spawning Abhorrence are also part of the black metal band Inquinamentum — whose releases Void and Lost/Risen I happen to enjoy tremendously.

The combination of those two factors and Spawning Abhorrence being a death metal project pretty much assured that I would be giving the group a look-see.

Their album, The Sleepless One, wasn’t due for release until February, though — the band had one prior release in 2014’s The Cursed Earth — and since we started the arc for the disc with our premiere of one of The Sleepless One’s songs, I figured we should check ground with the group there.

As mentioned, the album marks the band’s second release and also a vocalist change as well. The core of the lineup consists of musicians Chris Fayers and Reuben Chadwick (the previously mentioned Inquinamentum gentlemen), and this time around they are joined by session vocalist M. Thacker to produce a relentless and hate-fueled nine songs, all packed tightly within thirty-six minutes.

The Sleepless One is the sort of death metal album where you can count the collected moments of calm on one hand. It is relentless from end-to-end otherwise. I know there is one at the start of the song “Congenital Incomprehension”, because it left such an impression that I actually took a note of it. It’s basically the extra moment of silence at the start of the song before it kicks in. By the way, “Congential Incomprehension” is also track two, so that should give you an idea of how relentless Spawning Abhorrence are.

The other is the effects-laden instrumentation at the start of the song “Existent?”, which is also one of the few times on The Sleepless One where a melodic line is established. Otherwise, the thirty-six minutes you spend with Spawning Abhorrence are going to be accompanied by the non-stop pulverizing of their brand of modernized death metal.

I say modern because it treads that very thin line at times where brutal death could easily fall into one of two directions — a very light death-core influence and a heaping helping of slam riffs. The Sleepless One is a big album, and a big piece of that album is humongous, chugging riffs with piston-fired drumming behind them. There are also just as many moments of brutal going head-on with tech-death-style guitar torture, the result of which is that the band have their fair share of segments that could be best described as “holy shit, what the fuck was that?”, as it seems like a guitar has been beaten into pieces after a lead section.

Spawning Abhorrence’s chosen speeds are two-fold: One is a grinding mid-tempo groove and the other is the hyperblast tempo more recognizable to modern tech-death listeners. Few songs on The Sleepless One ever just stick with one, so you have moments of music that slither around and slowly build into massive explosions of rapid-fire blasting with enough rattling to sound like someone unloading an assault rifle into a trash can.

Whilst album opener and title track The Sleepless One is a slow-motion grinder, the aforementioned second song “Congenital Incomprehension” is where you get your taste of the band’s quick-switch songwriting style. At first, it seems like “Congenital” is going to continue the act of making The Sleepless One into a big and slow-moving death metal disc, and then all of a sudden things just accelerate — like the song hitting a boost pad in a game.

Especially in the bridge sections that are used to close the song, it just feels like a maddening wall of notes and riffs descends on the song and no one in the band knows how to react other than to try to hang on for dear life. There is one more gasped-out verse after its first appearance, but that gets completely swept off the board when that lead segment returns.

Track five, “Between The Divine And Denied”, practically fires its opening salvo with a bunch of guitar and bass work like that segment. It is also one of the faster-moving tracks on The Sleepless One and is the one I’m most prone to recommending outside of the more melodically-inclined album closer of “Existent?” — which is something of a stealth highlight track.

Vocalist M. Thacker alternates between a mid-to-high scream that seems to burrow itself into the songs, but he spends the vast majority of his time with microphone in hand with an absolutely abyssal roar. He’s just fully open-mouth growling his way through swaths of material, and that contributes immensely to why Spawning Abhorrence have the brutal-death tag as one of their genre descriptors. Even as a session vocalist for the Abhorrence guys, Thacker builds a hell of a case as a death metal vocalist on The Sleepless One.

That also leaves the musical front to the maddening alchemy of guitarist and bassist R.Chadwick and C.Fayers (as they are credited on the disc), respectively. The bass playing on this disc is another big piece of the pie for the Spawning Abhorrence sound. Whilst R.Chadwick has to have absolutely murdered his guitar over the course of the songwriting sessions for the album, with its tremendous number of worming riffs and finger-torture buzz-saw segments, the low end is mixed in and is quite beefy on this go ’round. There’s the obligatory “stop and let everyone know you have a bassist” section in one song, but you can still hear it just rumbling below the surface over the whole disc, helping to propel it forward alongside the barrage of drumming that is tying the whole affair together.

The Sleepless One is not completely without fault though, as it certainly is prone to finding a groove and sticking to it. There’s certainly some truth to the idea of never going broke playing to the cheap seats, so when Spawning Abhorrence find themselves a solid, mid-tempo groove, they make the most of it.

This means that The Sleepless One is an absolutely massive experience, even with its shorter run-time, simply due to the wall of chugging and gurgling guitar sections that help Frankenstein whole songs together. It makes for a fantastic full-album run, as it is over a half hour of solid death metal beating for sure.

When I enjoy the Abhorrence gentlemen more, though, is when they take the shackles off and just speed into high gear, which is why I zeroed in on songs like “Congenital Incomprehension”, “Between The Divine And Denied”, “Man’s Great Creation” (another faster opener), and “Existent?”.

The Sleepless One is an out-of-nowhere surge of brutality. It is more than happy to continue grooving along, heavy as a ten-ton weight, before quickly unleashing a hellstorm of music on you in the span of forty seconds. At the very least, if you don’t find yourself digging into every song, you’re certainly going to walk away from The Sleepless One with a severe case of whiplash from all of the tempo changes.

The Sleepless One was released by Kings of Decay in digipak CD format and is available here, as well as digitally on Bandcamp.

6 Responses to “SPAWNING ABHORRENCE: “THE SLEEPLESS ONE””