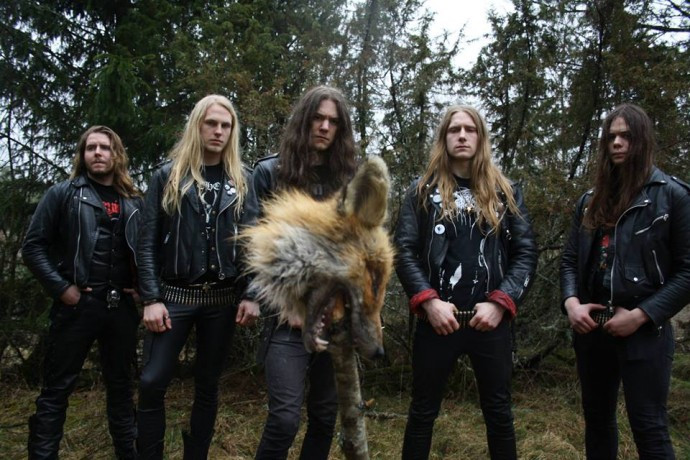 (Comrade Aleks brings us another interview from the domain of doom, this time confronting the Swedish band Anguish.)

This angry doom metal band from Swedish Uppsala made some noise with two full-length albums – Through the Archedemon’s Head (I believe that you at least have seen its artwork) and Mountain. Their slow, heavy, vocals are harsh and wheezing – they are too traditional for death doom metal and too tough for trad doom.

However, I have checked the band’s status time to time and didn’t see any news for some period. My duty called me to write an email to Anguish, and David Eriksson (guitars) answered me. Here’s his interview, done with the help of Anguish’s vocalist J.Dee, who periodically appeared from the shadows.

Hi David! How are you? What’s going on in the Anguish camp?

Hi! Well, it has been a while since people heard something from us. After the recordings of Mountain we have simply done nothing, not even rehearsed, just wanking in the shadows. But in the silence, me and J. Dee have written music and lyrics.

The main reason why we haven’t done something since our last studio time is that Christoffer and Rasmus have focused on their other band Acolytes of Moros and I had my first-born child. But now, more than two years later, we have material for a third album that we will start to rehearse soon.

Yes, the time is a vital factor, but what kind of inspiration do you need to sit still and write down some distorted and heavy tunes?

First of all, I need to have been relaxed for a while. I can’t do any music right after a work day, so it’s hard to find time to sit down and write.

I usually get some inspiration by looking into the night sky, the moon, the woods, and the unknown, like haunted places, like abandoned old houses or abandoned industries. I live deep in the woods and next to an abandoned mine which I often go and visit for founding inspiration. 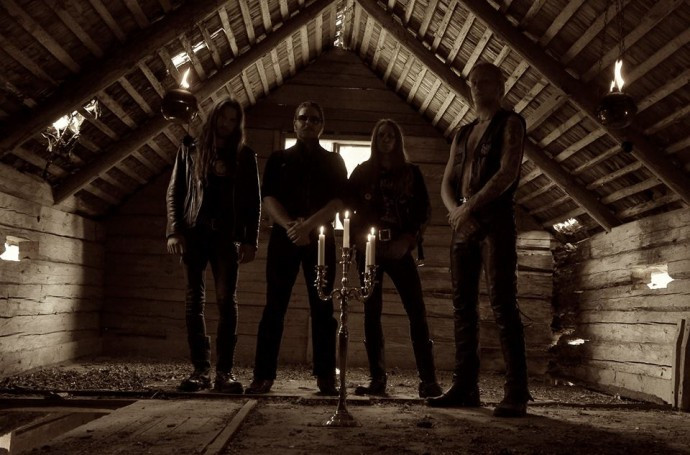 How often do people ask you about band’s name? You know — there are a dozen Anguish bands. How do you live with that?

Not that often, I have checked out the other Anguish bands, and they have only released some demos and then split up. And some others started after us. This Anguish was founded in 2007. I cannot say that I am bothered by this.

Anguish – When the Ancients Dare to Walk

The band has lived through a few lineup changes. Who is in the Anguish crew now besides you?

Yes, we had a totally different lineup in 2007/2008. But we never released anything with that lineup. Me and J.Dee were the only ones left for a while ’til we found Rasmus, Christoffer, and Anton in 2009. Anton Johansson played bass on our first Demo, Dawn of Doom, and the split with Black Oath, then he quit, and on our debut album, me, Christoffer, and J.Dee handled the bass.

After that recording we found another Anton who played bass on our gigs and on the split with Below. On the second album Christoffer and I played the bass again. Right now J.Dee is our main bassist, but he still handles the vocals too. Christoffer has quit now, so right now the lineup is me, Rasmus, and J.Dee. We have talked to a new guitarist who will replace Christoffer, but he has not started yet, so I cannot reveal any names. However, he has not played with any other bands before, so he is pretty unknown. 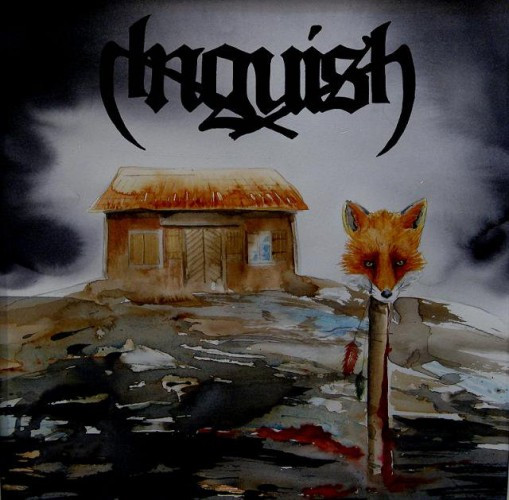 How do you share your duties in the band? Who usually writes lyrics? Who produces the basis of the tracks?

J.Dee is our lyric master, he spits out new and brilliant texts every single week, I have no idea where he gets everything from. I do the most music, but J.Dee and Rasmus help me a bit with some of their ideas. Christoffer wrote our Intro to Mountain

Let us return to the past. I remember well the artwork for your debut Through the Archdemon’s Head, it’s striking. I heard that the story of the album is focused on the fictional deity Siugnah. Does it have a connection with Japanese beliefs in the demon fox or is it just your imagination?

(J.Dee speaks from the shadows): Well, the fox being a part in a wide range of cultures and beliefs around the world, one could assume that we are, in fact, inspired by other cultures’ views regarding the fox, but in our case it has nothing to do with other beliefs. But it may be so, that it is the same reason the fox became a kind of symbol to us and to her. 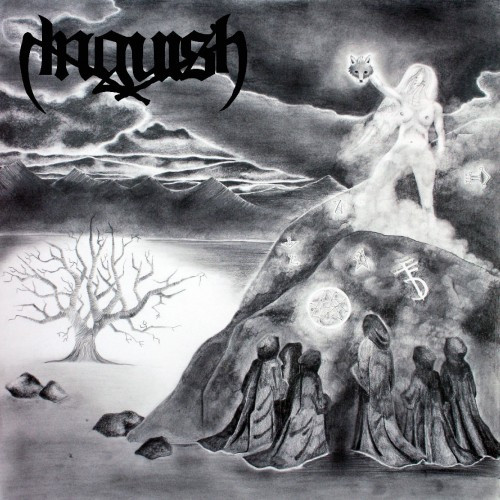 Did your second album Mountain continue the plot of Through the Archdemon’s Head?

(J.Dee Speaks from the shadows): In a way it does. The stories in themselves are timeless, but in the timeline of the deity saga, Mountain is a sequel to Through the Archdemon’s Head, both musically and in the storyline.

Anguish is usually described as a doom metal band, but you sound heavy for its traditional form. How did you come to such a brutal sound?

I don’t know really, I suppose that the first demo was pure Doom, and also Through the Archdemon’s head in a way. Nevertheless, when I started to write for the second album I wanted something more; doom nowadays is not brutal anymore.

When Candlemass released Epicus… it was the heaviest album people had ever heard, and that was exactly what Candlemass wanted to reach, I suppose. Doom metal bands now just try to do what Candlemass did 30 years ago. I think that if Candlemass came today, they would have sounded much more like we do now.

I still think Epicus… is the best album ever. But we can’t have that album as inspiration on everything. Everybody in Anguish listens to all kinds of music, like black and death metal, so bringing in stuffs from that genre is just a natural thing for us. 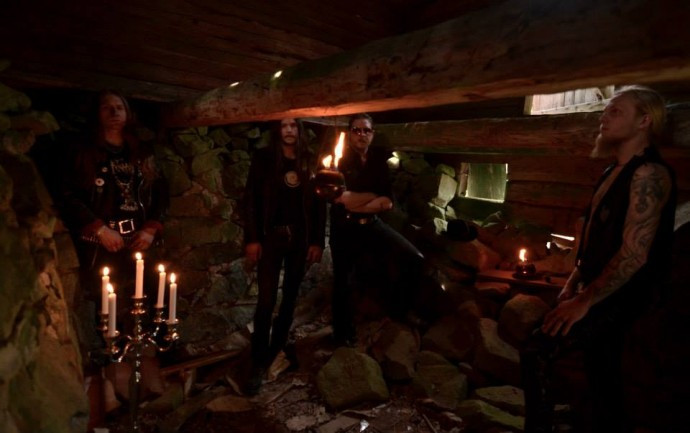 Candlemass already has this new EP, and they celebrate the 30th anniversary of Epicus Doomicus…. What do you think about the changes the band have lived through during the last years?

I still love Candlemass, and their American singer Robert Lowe was great, too. And I have seen them nowadays with Mats Leven on vocals, and he is an awesome singer who suits the old songs great!

About this newest EP, I don’t like it as much as I was hoping. “Psalms For the Dead” was really good, but this new EP goes too fast for doom, and it’s a lot of ballad stuffs going on in the middle of the tracks. But it’s still very much great riffs, too. Leif Edling is a riff master. But I liked his new band The Doomsday Kingdom better than the new Candlemass EP.

Will you change the lyrics’ main idea for the forthcoming third album?

(J.Dee Speaks from the shadows): It would certainly be a lie if we said yes. It will stand on the same ground as the two predecessors, but in this universe the limitations are next to nothing. That is the good thing about having a solid idea, you can always step back into the foundation if the mind becomes blank. But who knows, the lyrics might take a harsh turn in an unforeseen direction.

Anguish’s third album is almost done. Can you share some details of this record? How does it sound?

We have six new songs, ready to blow away peoples’ speakers. This album will be a natural follow up to Mountain. I think it sounds much like what our fans can expect from an Anguish album. I work a lot with harmony guitars and with riff-based songs, as always. One song is our slowest song to date, maybe too slow for Anguish fans haha.

Besides that, it’s pretty much mid-tempo and some faster parts. As I said earlier, we soon will have a new guitarist, and he is a great solo player, so we will have more and better guitar solos then before. I hate to write and play solos myself haha, but have been forced to write and play them as far as I can.

So do I get you right that you’ll make him take part in the creating of Anguish’s third album, too?

Yes I think so. At least he will help me out with the solo writing. But almost every new song is done already, and the solos too, but I will still let him write whatever he wants to write if he has some good ideas for the new songs.

David, do you have any dates or maybe a label who will release the third album?

The Anguish manner of playing is straightforward — Anguish is loud, heavy, and angry. What kind of energy do you put into your songs?

I’ve always played what’s come up in my mind. Why we sound like you describe is hard to know; J.Dee sounds pretty angry though. And I hate ballads, so I need to write riffs that are contrariwise. Then it becomes loud and heavy, obviously.

David and J.Dee (from the shadows), thank you very much for your time and this interview,

I hope that at least it will gain a few more likes on the Anguish page. How would you like to sum up our discussion?

We thank you for a fun and cool interview. If any of you readers need any merch or music, please send an mail to anguishdoom@hotmail.com. We still have the most items left.

Thank you all and keep supporting the doom metal underground!

2 Responses to “AN NCS INTERVIEW: ANGUISH”