As our regular readers are well aware, we have become ardent followers of the Greek band Aenaon since discovering the wonders of their 2014 album Extance, which made no fewer than four different year-end lists published at our site, as well as a host of our reader’s lists. It was also the source of a song (“Grau Diva”) that I included in my list of 2014’s Most Infectious Extreme Metal Songs. You may then be able to imagine how eagerly we have been awaiting the band’s new album, Hypnosophy.

The album will be released this fall, adorned by the eye-catching cover art of Łukasz Wodyński, and this morning we got a first taste of the music within, because Aenaon has begun streaming the album’s opening track, “Oneirodynia“.

The song has a beautiful, mesmerizing beginning… but don’t get too comfortable, because it soon ignites in a fireball of intensity. As the blast front propagates, the music grows in its fascination, with the jolting attack accented by wonderful saxophone solos, neuron-twisting guitar machinations, a riveting performance by the rhythm section, and a stirring mix of harsh and clean vocals.

The intensity abates in the song’s second half, making way for an intriguing instrumental section before the final surge of exuberance, led once again by an incendiary saxophone performance.

Aenaon continue to push the envelope of what progressive extreme metal is capable of achieving, mixing a variety of styles and musical ingredients into an intoxicating concoction. Want more!

No doubt, we will provide further information and opinions about Hypnosophy as we get closer to the release date. 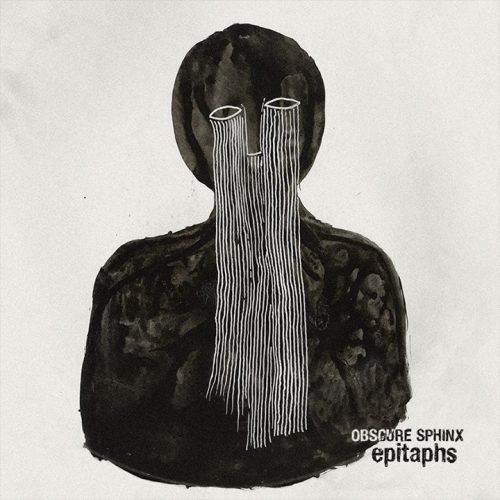 Last fall, in the 66th edition of THE SYNN REPORT, Andy reviewed the discography as it then existed of the Polish band Obscure Sphinx, recommending them for fans of Cult of Luna, Tool, and Triptykon and praising the albums “as a masterclass in how to craft songs melding mood and emotion, rage and clarity, captivating song-writing and focused metallic heaviness”. This past spring, he then named the band’s next album as one of his five most anticipated of this year.

At that time, the album wasn’t finished yet, but now it is. It has a name (epitaphs), a release date (September 12), cover art by Gojira’s drummer Mario Duplantier (above), and as of today a first single (“Nothing Left“).

This is a long song, topping 12 minutes. It may not be long enough. You fall into it as one might imagine rocketing through a wormhole that traverses dimensions quite unlike our own. Anchored by a drum performance that transfixes the attention from almost the very beginning, the intensity of the music grows, with thick, warping chords and bleeding-throat screams in the vanguard.

Along the way, there are modulations in the intensity, thanks to acoustic strumming, rippling tremolo leads, and high falsetto vocals that change the mood and emotional colors of the music. A heady, enthralling trip indeed.

epitaphs can be pre-ordered here: 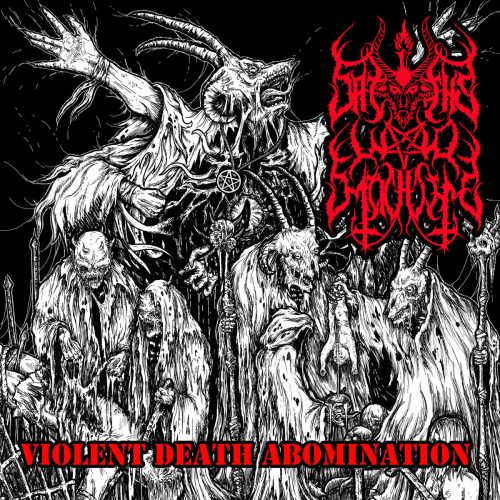 I confess that I chose to include this next song in the round-up as a means of providing variety and balance. Also, how could I possibly overlook a band named Satan’s War Machine and a song named “Pure Evil” from an album entitled Violent Death, with cover art like that? So metal.

Satan’s War Machine hail from Ukraine, and Violent Death is their debut album. It follows a 2013 demo, Thorn Flesh, which also includes this same song plus two others, including a cover of a track by Khold. The album will be released on September 27 by the Belarusian label Symbol of Domination Productions.

“Pure Evil” is pure, primal, pulse-pounding, hard-rocking, viciously thrashing black metal, with poisonously addictive riffs that will get your head bobbing and your feet moving. For me, this was lust at first listen. These dudes are the real deal, and this song has been virtually assured a place on my list of this year’s Most Infectious Extreme Metal Songs.

You can pre-order Violent Death on CD or as a digital download here (the single is now available as a free download at the same Bandcamp page): 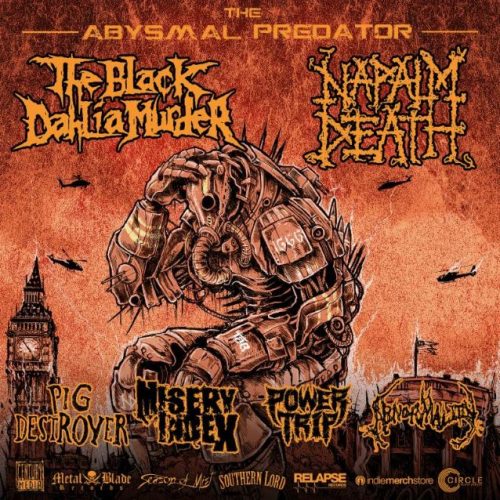 My comrade DGR alerted me to the following announcement: The Black Dahlia Murder and Napalm Death will co-headline the Abysmal Predator tour this fall with support from Abnormality. Pig Destroyer, Misery Index, and Power Trip will also appear on select dates. The schedule for the tour can be found below. As DGR said, “it’s a great tour if you convince everyone that anything north of San Francisco doesn’t exist.” Yes, I am sad about that, too — because it really is a great tour.