(Austin Weber introduces our premiere of a new song by Pennsylvania’s Veilburner.)

When working on new articles or premieres for bands I’ve already covered in the past, sometimes it helps as a refresher to go back to what we said about the band before, to help put in context the new music being presented to us by such a group. Yet again, this line of thought came to mind in reflecting on our continual coverage of the unique form of  industrial and psychedelic-infused take on black-metal-meets-death metal that Pennsylvania duo Veilburner continue to crank out year after year.

Looking back at our NCS archives, we first covered Veilburner here at NCS in 2014 in a multi-band article I posted soon after hearing about their incredible debut, The Three Lightbearers. Since then the band released a follow up full-length last year called Noumenon, from which we helped premiere a song called “Ever Relapsing Fever”. That was followed by the album’s placement on year-end lists here by both Andy Synn and myself.

While I failed to do a full review for either of those first two albums, both of them have continued to be releases I come back to, so I kinda feel like a dick for not doing more to help spread the word about them. I will have a chance to do better this time around, starting with this premiere of a killer new song off their upcoming third full-length, The Obscene Rite, entitled “Eucharist of the Breathing Abyss”. 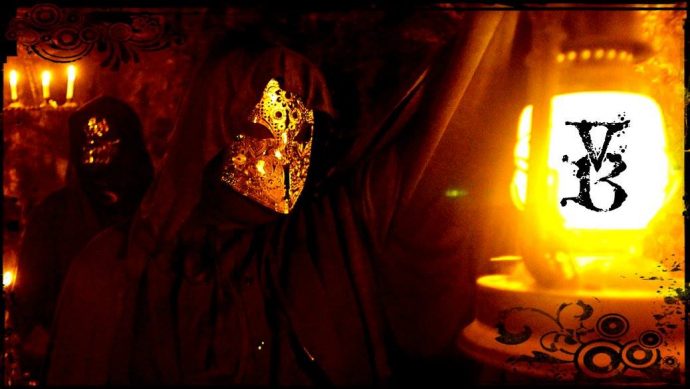 As the first single from their third album in three years, “Eucharist of the Breathing Abyss” is an interesting showcase of the group’s ability to meld the more aggressive and unhinged feeling of The Three Lightbearers with the more progressively inclined and ever more experimental sound displayed on Noumenon, creating a hybridized sound that’s the best of both worlds.

When I asked the band if this was intentional, they said yes, and having heard all of the album early, I can confirm The Obscene Rite is far more than a mere mixed re-hash of their previous two albums. In its totality, it again shows the group in a further evolved state — simultaneously more progressive,  more unhinged, and likewise consisting of even more unconventional music in more complex song structures. Truly, “Eucharist of the Breathing Abyss” is everything one could ask for as a killer new single from Veilburner.

Taking in the unnerving madness the track throws at you conjures up horrific feelings of otherworldly Lovecraftian creatures attacking one’s mind and soul. But somehow, it’s an enjoyable attack on the senses, one that keeps drawing me back into its creepy-yet-catchy depths.

Veilburner’s The Obscene Rite will be officially released on  Friday, September 30th. The album can be pre-ordered through their Bandcamp page linked below.

8 Responses to “VEILBURNER: “EUCHARIST OF THE BREATHING ABYSS””