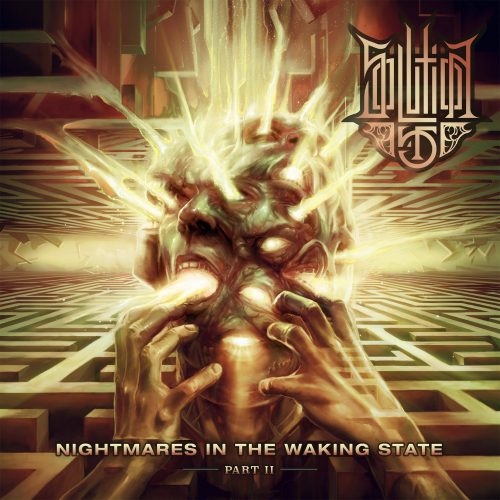 (DGR reviews the new album by Sweden’s Solution .45, which is out now via AFM Records.)

Five years after their debut, Solution .45 returned to the musical stage with Nightmares In The Waking State last year. The band had intended for Nightmares to be a multiple-part release, and in that sense the group were not fucking around.

Often, when a band announces multiple-part albums some sort of wrench will get thrown into the works that results in delays, or extended waits between the discs — so if you enjoyed the themes present on said hypothetical first disc, you often had to just sit and twiddle your thumbs for a few years whilst waiting for a followup.

Nightmares In The Waking State doesn’t have that issue, as earlier this month saw the release of the second part of that album — with a color-muted and sepia-toned version of the first part’s Pär Olofsson drawn artwork.

We came down pretty even-handed in our review of the first half with a general impression that there was a lot of potential on the Nightmares release, and that it was pretty top-tier for what it had going on already. Part II, coming in hot a year later, continues that trend — not changing much but expanding upon some of the musical ideas present on the first Nightmares release. It pushes on some of the edges that the first disc introduced, resulting in an album that swings wildly in its moods, with some of the heavier songs on the two discs so far making their appearance, as well as one of the sappier ballad-heavy tracks, and even the most saccharine-sweet melo-death pop song the band have done yet.

One of the things that has been a constant draw for me when it comes to Solution .45 are the musicians involved within, and not just the vocalist whose name tends to grab a ton of the spotlight.

Christian Älvestam is for me, anyway, something of a known-factor at this point. He’s got a super-high bar of quality attached to him. You can see why some folks follow projects he is in simply by his name. I’ve been following the dude for a decade plus and have a multitude of releases where he handles the vocal work, including guest appearances with groups like Bloodbath, Disarmonia Mundi, and Universum. I’ve even got the Svavelvinter release kicking around somewhere. With Solution .45 he is very much within his comfort-zone and the dude is producing product. He remains an immensely talented vocalist with multiple different styles and ranges available to him.

What has made Solution .45 interesting, however, is the full crew that makes up the band, and how it is mostly made up of musicians from other projects he’s been involved in. It is those bands that have tended to stretch this melodic-focused death metal style in a variety of different ways, including main co-hort Jani Stefanovic who also plays with Chris in Miseration. I loved the third Miseration release. It felt like the guys in that group were just going nuts with their brand of death metal.

The musicians within Solution .45 seem to have made a point to be a little bit more freewheeling with this project, and you can hear it quite a bit in the Nightmares In The Waking State collective of songs especially, as multiple elements from the crew’s other groups have wormed their way into the Solution .45 songs proper — and it makes things fun. For instance: No one expects the synth line that makes up “Alter (The Unbearable Weight of Nothing)” from the first Waking State release, but that thing is fun as hell and could serve as the backing track to a rap song if it wanted.

Waking State II doesn’t stray too far from its predecessor — which is understandable given the year gap between the two; a lot of these songs likely have their roots in the same writing timeframe. It does, however, do things a little differently though. For one, the album starts with one its heavier songs, saving the more recognizable formula of clean-sung chorus, growled verses, for a song later. It still has its one hefty ballad song, and one that gets damned close to it as well.

There’s no super-long prog song this time, leaving Waking State I and For Aeons Past the champs in that regard. The longest song on Part II is “Built On Sand” — which was one of the tracks that the group put out in the leadup to the disc — with its over seven-minute run time. Multiple songs on Part II clear the six minute mark, but many of the songs on Part I did the same.

Given this, it’s easy to state the obvious — that Parts I and II are definitely part of the same musical collection and both run into each other rather well. If you didn’t enjoy One, Two likely won’t change your mind. There are, however, a handful of awesome songs present, like the aforementioned wanderer that is “Built On Sand” and the heavier opener that is “The Faint Pulse Of Light”.

There is also the infectious poppy track “Inescapable Dream”, which will likely slot into the top five catchiest songs Solution .45 have done, since they’ve made a show out of the growled-verse, catchy-chorus songwriting style. “The Curse That Keeps On Giving” is the previously mentioned power-ballad. The song’s subject matter isn’t the type built for balladry, but given that the band slow down and really let Chris just belt out the cleans, it’s recognizably that song on the disc. Even though Part II tries to differentiate things in a lot of regards, that one does not. For Aeons Past had one, Waking State Part I had one, and so does Waking State Part II.

What is interesting about Waking State Part II is that it feels like a much meatier disc than Part I was. The multitude of songs on Part II that clear the six-minute mark don’t often do that under false pretenses with extended ambient sections, they instead are just massively chock-full of different groove-heavy riffs. There’s even a huge block that sounds like the modern-day low-tuned multi-stringed warriors of the plurally-named band scene, minus the howling that often passes for singing in those groups.

“What Turns The Wheels” and “Chain Connector”, for instance, are both these huge, chugging songs that stomp around for their opening segments. “Chain Connector” gets especially death metal, backed by a synth choir sting just to really ratchet things up a bit. In terms of heavier vocal delivery, “Chain Connector” and “The Faint Pulse Of Light” would be the songs to go to, because things get low on both of those tracks.

With the full suite of Nightmares In The Waking State songs coming in at over twenty tracks, a run of the full thing is a lot to ask. Part 1 and Part 2, coming in at one year apart, feel like two approaches to the same topic, with Part 1 being a more traditional Solution .45 release — or at least sharing more in common with its five-year older sibling at the time, For Aeons Past. Waking State Part 2 feels a bit heavier and a little bit more reserved to one focus; the songs are more evenly distrubuted on Part 2 and are also more death- and groove-focused. You still have Solution .45 playing to the hometown crowd with the constant shifts between the clean singing and immense growled sections, but the band spend more time in the heavy realm this time around, save for the one really ballad-focused song that I mentioned earlier.

Writing a collection like Nightmares In The Waking State is an immense undertaking and one that has massive risks attached; usually if people don’t like one part, it can color their impressions of the whole collection of songs. Part 2’s benefit is that it feels like a true sibling to Part 1 and moves the needle further into the heavy realm, meaning this particular batch of ten songs is built for the headbanging crowd. It proves itself to be a worthy followup to Part 1 and also shows that even though Solution .45 are the more listener-friendly band of the collective members’ projects, they aren’t afraid to crank things up.